The Dog days have just begun

Indie rock band Dr. Dog played to an enthusiastic crowd at The Vic. 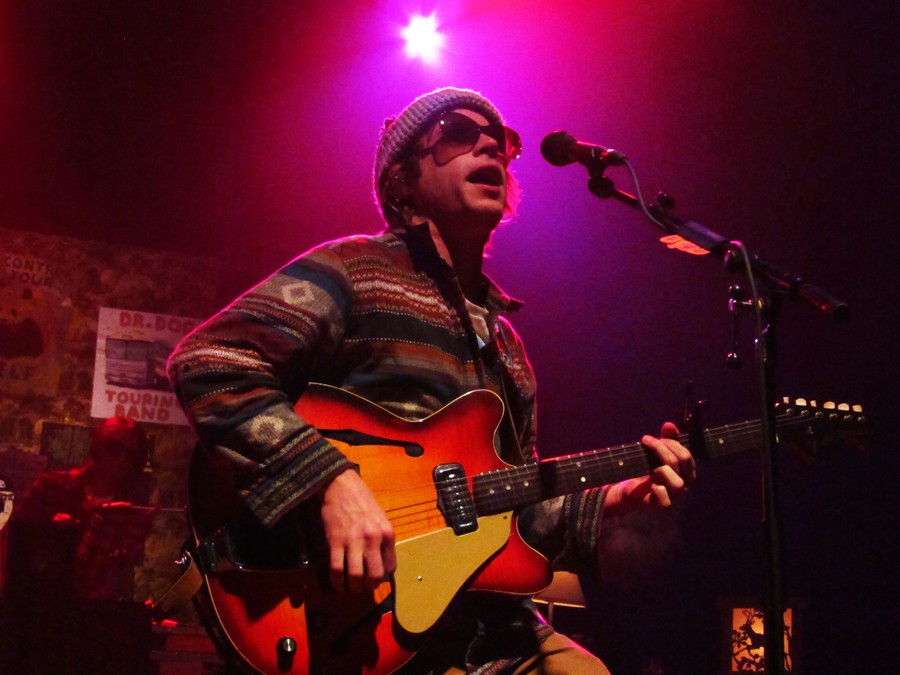 Last Friday, Dr. Dog invited me to the recording studio. While I was there, we danced, jammed, sang, and rocked. The six-member indie rock band played material from its latest album, Be The Void, and it was really good.

Well, they didn’t actually invite me personally. We were at The Vic Theatre, and there happened to be about 1,400 other fans present—but it felt like it was just the band members, the music, and me.

The stage had been elaborately transformed into Dr. Dog’s own cozy “recording studio,” with hanging psychedelic artwork, Persian rugs, and a fireplace with a fake stuffed lion head mounted over it. Lamps sat atop multi-colored stained glass end tables, and the backdrop resembled an apartment wallpapered with various Dr. Dog posters. The combination of this homey, authentic décor and an organic, uncomplicated performance brought the audience into a recording session with the indie-rock standout band. Despite the wonderfully eccentric and slightly chaotic stage, the décor did not overwhelm the band’s intimate musical performance. An expert blend of professionalism and genuineness, the show was well worth the $22 cost of admission.

Because Dr. Dog and I share the same hometown, I’ve seen the group in concert several times, and I’ve always enjoyed its music, presentation, and energy. (The band often spends an extra night performing in Philly during its tours, showing appreciation for its city and original fan base.) But this concert introduced me to a new Dr. Dog—one that is bigger and better than ever. The band’s passion was clearly evident, and the ensemble moved around the stage just enough to keep things interesting, without causing distraction. This concert was all about the music.

Dr. Dog started with “That Old Black Hole,” the second track on Be The Void, which was released on February 7 via the ANTI- record label. Scott McMicken’s unmistakable voice opened strong with this quintessential Dr. Dog tune. Featuring guitar, drums, keyboard, outer space-like sound effects, and a catchy hook, this song set the mood for the concert.

The flannel- and sweater-clad crew continued with some earlier, favored repertoire—“Stranger” from 2010’s Shame, Shame, and “The Breeze” and “The Ark” from 2008’s Fate kept the audience singing—until the band emerged with another gem from the new CD. “Lonesome,” the opening track on the new album, warranted head bangs, cheers, and claps from the audience. The twangy, bluesy tune, featuring slide guitar, added a new layer to Dr. Dog’s music.

The audience jammed to more of the band’s most popular tracks, including “From” and “Worst Trip.” The four-song encore ended with—what else?—a raspy rendition of “Heart It Races” by singer and bassist Toby Leaman. The band’s well-known cover of the Australian indie-pop band Architecture in Helsinki’s tune, originally released in 2007, is a Dr. Dog concert staple.

The band’s recorded tracks and live performances of the songs from Be The Void were catchy, loose, and creative. In concert and on the new album, the band exhibits traces of inspiration from The Beatles, The Kinks, blues, and psychedelia—a ’60s throwback, British invasion sound with a contemporary indie twist. Best of all, Dr. Dog is an original and musically mature band. Listen to “These Days,” track three on Be The Void, which should be the next indie-rock hit.

After more than 12 years of writing, performing, and recording, it’s obvious that Dr. Dog is in its prime.