At Union Station, fashion's on schedule 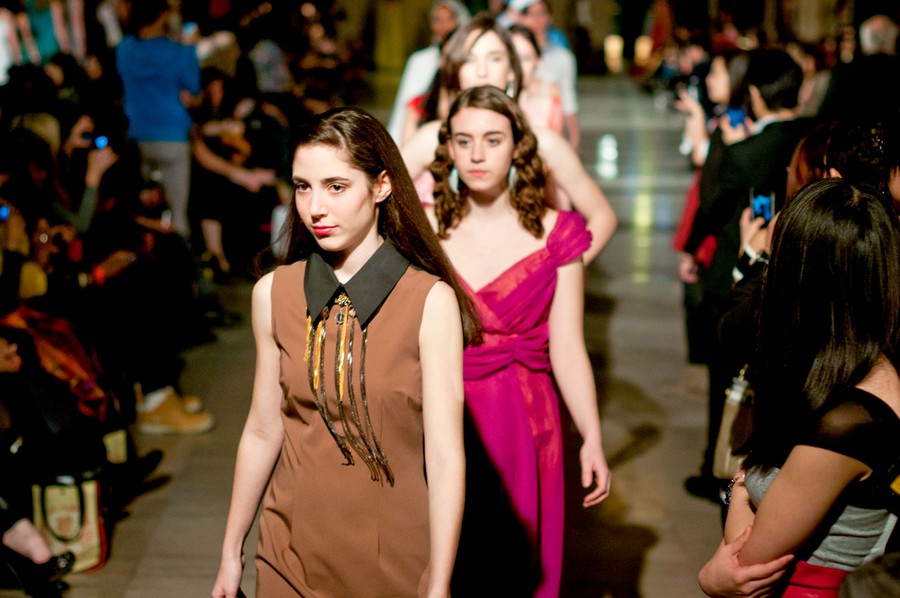 Union Station looked a bit different this past Friday—instead of humming, as it usually does, with rolling suitcases and ripping ticket stubs, the space echoed with fast-paced music and clicking cameras. Station-goers traded their Skechers for stilettos for the annual MODA Spring Fashion Show, where 20 designers and artists presented their work to a dressed-up audience numbering in the hundreds.

The 20,000-square-foot Great Hall presented MODA planners with a difficult challenge: namely, how to fill it. Lauren Kelly-Jones, a second-year MODA-ite, commented, “It’s such an iconic space . . . It’s so much bigger, so much more intimidating.”  Though the massive room did feel a bit hollow on show night (how could it not?), the space was smartly organized and provided a marble-clean backdrop for the ultimate stars of the night—the designs. The buzzing crowd had plenty of room to mingle, to meander to the wine table, to chase down a server for some hors d’oeuvres, or to snap pictures with the many chic attendees. Before the show even started, fourth-year Sam Edds compared the venue to those of years past, remarking, “This is by far the best show, probably the most extravagant. It’s incredible to look back from first year to now.”  Judging from the upturned heads and wide-eyed expressions throughout the room, the audience seemed to feel the same way.

After the general admission attendees had been whisked off to the sides, organizers projected a short video describing Dress for Success, the nonprofit group to which MODA donated all of the night’s proceeds. As soon as the video clicked off, the loud music clicked on, and the show began.

The first model out might have been the best of the night, strutting confidently down the twisting runway that wound through the station’s long waiting benches. What followed behind her was an interesting display of movement that at times gracefully contributed to the clothing, and at times painfully distracted from it. Considering the short amount of time most of the models had to prepare, though (only a few rehearsals, including one in Harper Library), the outcome was admirable. Needless to say, the University of Chicago isn’t exactly where models go to perfect their craft.

Much like the models, the designs themselves presented a handful of lovely pieces punctuating a string of good-but-not-great attempts. Lizmarie Oliveras produced several clean pieces, of which one (a navy blue halter dress with leveled hem) was simple yet innovative, and struck a fresh note between the somewhat heavier designs that preceded and followed it. A stunning painted coat by second-year Kimberly Lum was the most striking individual piece in the show. The most memorable collection of the night belonged to Columbia College student Shelby Steiner, who provided an unusual combination of pattern and texture, fusing florals, sheers, and leather (or something like it) into an exciting and innovative display.

CLEONS, a line by Columbia College student Chad Leon, who described himself as “just an underground fashion designer,” broke the pattern of dresses and skirts with an aggressive collection of shiny, shoulder-heavy menswear that jolted the show with an unexpected energy (however, the claw-like mass of fabric hanging from one of the models’ hands was a bit distracting, I must say; I’m not sure where he was going with that one).

Well-tailored blue pants emerged as a theme of the show, as pieces by Ann Taylor and student designer Fatima Ibrahim offered breezy interpretations of casual springwear.

Despite obvious construction flubs, (the sewing was questionable in a few cases), the show was a success. Sure, some of the model walks were a little uncomfortable to watch and a few of the designs raised confused eyebrows, but considering the fact that many of the designers only began working with clothing in MODA’s Designer Boot Camp, held just ten weeks ago, the results were commendable. Though voices could be heard afterward chuckling, “Someone’s boob pads fell out!” and “What the heck was on that girl’s head?” the response was, on the whole, positive. After the show, third-year model Marsha Moses exclaimed, “This was a night of fun and a night of elegance,” and as the buzzing crowd filed out of the glowing room, everyone in attendance—models, designers, parents and friends—seemed to agree.