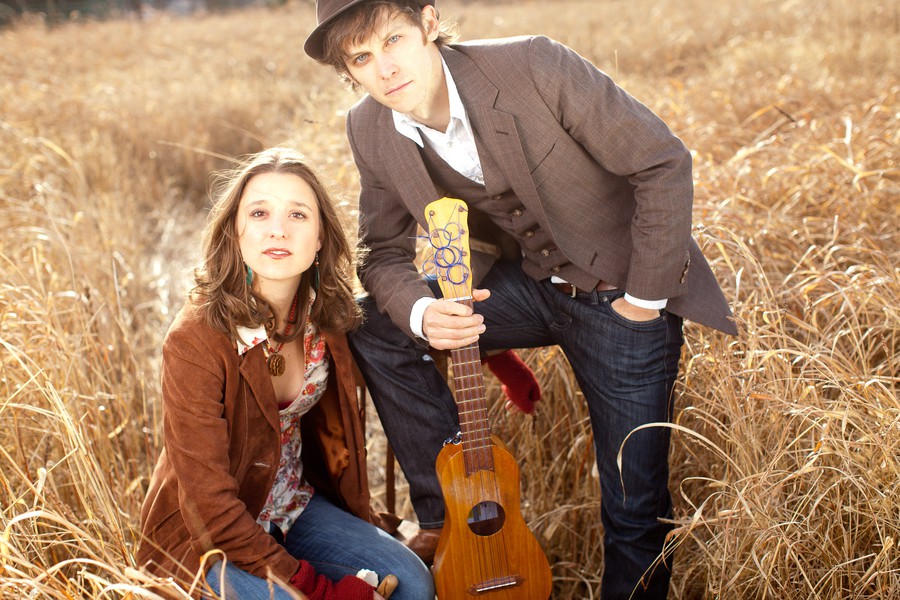 In a back dressing room in the basement of Mandel Hall, Suz Slezak, one half of the creative team behind the indie-folk band David Wax Museum, applied her makeup and talked about the band’s new van. On February 22, the band had posted on Facebook: “Bad News: our minivan that devoted two years and over 100,000 miles of its life to the band finally bit the dust. Good News: we’ve just welcomed a new 15-passenger van to the Museum family. Stay tuned for a naming contest!”

“I’m happy to be on the road again,” said Slezak, who, upon meeting me, enveloped me in a hug. Next week, the band will tour China, where their chameleon-like cultural approach will surely be appreciated. “I really thrive on the energy of the audience,” Slezak said. During the show, she described being on tour as a “waking dreamlike musical state.”

David Wax Museum played Friday night in Mandel Hall as part of the eighth season of Artspeaks, a University initiative that brings artists to campus for performances and workshops. The band, which has two core members, David Wax and Suz Slezak, was joined by a percussionist, Greg, a clarinetist, Alec, and an accordian player, Jordan Wax, David’s cousin. It is known for integrating Mexican folk traditions with Americana, and it occupies a space that is at once ambitious and humble, a mix of scholarly musical breadth and populist sensibility.

Mandel Hall seemed oddly-suited to the task of housing a band that thrives on performances in living rooms, bars, and smaller venues. “I keep seeing this stained-glass window out of the corner of my eye that’s like a row of elders or angels looking down on me,” Slezak said. As the audience was taking its seats, ushers instructed the audience to sit close to the aisles, to create a more intimate atmosphere than Mandel Hall usually affords.

Brian LaDuca, the Director of Theater and Performance studies and University Theater, said that the event would mimic the MTV “Unplugged” concerts, in which the artist talks in between sets. “Their new, unique aesthetic is creating waves in communities,” LaDuca said. “They’ve played so many house concerts, bars. We want them to drop inside the audience—it’s an environment to mirror their aesthetic.”

And drop they did. Live performance is clearly comfortable territory for David and Suz. Their sheer vivacity is overwhelming in performance: Suz destroyed half her bowstrings during the show and sat on an audience member’s lap; David serenaded the audience in Spanish from the balcony of Mandel Hall, his sky-blue tie askew; when, at one point, the band spoke about money (they are raising money for their next album by taking pledges from fans), Jordan cried out in anguish; and the clarinetist, Alec, had a solo within the first five minutes of the performance. The band balanced its raucous moments with several more serene ones, which often featured just one or two members instead of all five. “When You Lie Still” was simple and lovely.

Less dynamic than the music was the conversation the band had with Theaster Gates, the University’s director of arts and public life. Gates’ questions were as unspecific as “I just want you to talk about your commitment to form” and “reflect about being hot, and young, and able to make music.” Throughout the conversation, the dynamic onstage grew draggy. Toward the end of the concert, he remained in his seat in the audience despite having said that he would ask the band more questions.

Despite Gates’ lack of direction, the band was game. “We have cultural access to such a diverse palette of musical languages, and those all give birth to new forms of expression. What’s important is keeping your feet firmly established in your musical identity, especially since we have a huge range of cultural identities that we can take off and put on like masks,” said Jordan, the accordionist.

Percussionist Greg spoke of a complex musical identity, saying, “There’s a certain nomadism that comes with this life, with this choice. As we move through different forms, we hope we touch upon this ground in a way that is respectful—we graze here, we graze there. Hopefully, we can do right by it, and come up with something new.”

The band’s members thus bared their souls to Gates, who inexplicably replied, “Hopefully, we can go into more depth next time.”

Also strange was how little of the audience was affiliated with the U of C, which became clear when Suz asked for a show of hands to find out how many people had found out about the concert independently of Artspeaks. A little over half the audience raised its hands. Introducing the band, Mary Harvey, an associate provost, said, a little nervously, “I’m here to tell you that arts are happening at the U of C!”