More than 1,500 fans were on hand Saturday to watch Chicago best Wash U 76–67 in a grinding physical affair. The win capped a perfect 25–0 regular season, an unprecedented event in U of C basketball history. 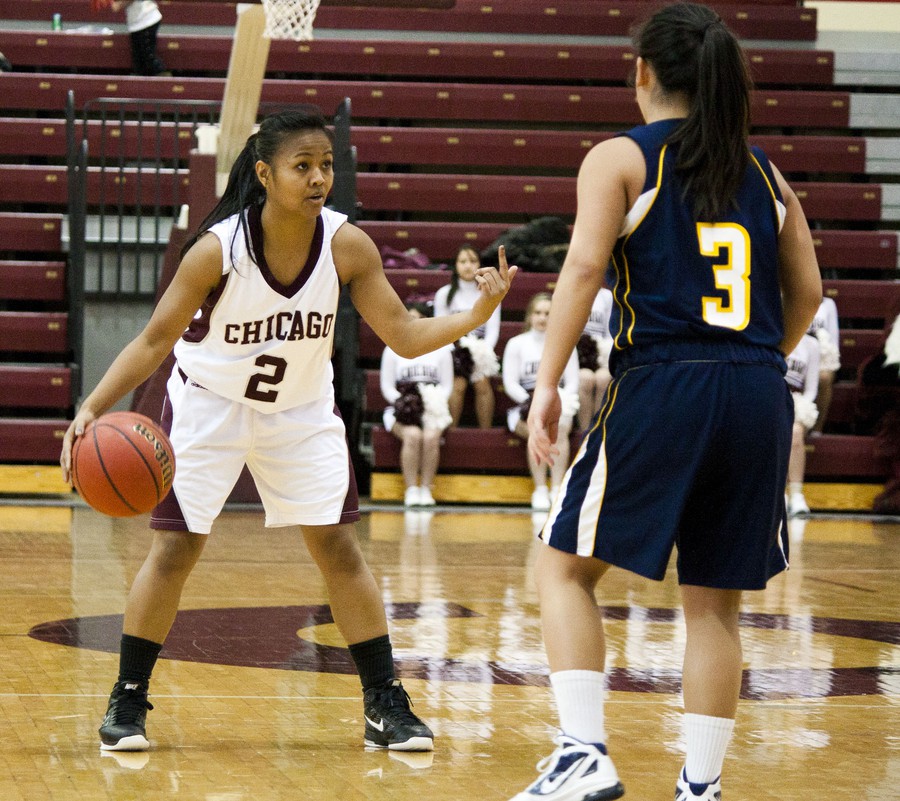 More than 1,500 fans were on hand Saturday to watch Chicago best Wash U 76–67 in a grinding physical affair. The win capped a perfect 25–0 regular season, an unprecedented event in U of C basketball history. Players and coaching staff downplayed the importance of the accomplishment, saying that they were excited before immediately returning to the one-game-at-a-time motto that they’ve espoused all year.

“I really haven’t thought about it,” head coach Aaron Roussell said. “I didn’t think about it all season. The more you allow yourself [to think about it], it’s just a truly remarkable accomplishment. But as much as we’re going to downplay it right now because we still have other goals, they’ll be a time to look back and really feel that sense of accomplishment.”

Perhaps more impressive, the win was Chicago’s 43rd straight regular season win, dating back to last year. The Maroons have lost just once since December 13th, 2011, in the Elite Eight to Wash U.

As expected, it was a physical affair between the two heated rivals. Wash U committed 25 fouls in the contest, and Chicago wasn’t far behind, with 22. The two teams shot a combined 64 free throws.

The Maroons fell behind early, down 10–4 after a jumper from star Wash U guard Dani Hoover. They quickly righted the ship, and a three-pointer from Ballard gave Chicago their first lead of the game with about ten minutes remaining in the first half. Chicago stretched the lead on the back of their free throws, as frequent foul calls quickly forced both teams into the bonus. The Maroons made eight of their 11 first-half free throws, and ultimately sunk 31–37 for the game—an 84% clip. At the end of the first half, Chicago held a 13-point lead.

“We have a really tall team, so people know they’re going to have to defend us in the post,” Ballard said. “That puts us at the line a lot, so we know it’s really important.”

A team of Wash U’s caliber was not about to go away quietly. The Bears charged out of the gates in the second half with a 9–1 run to pull back within four. That would be as close as the teams would get, though, as Chicago responded to the Wash U assault, as they have all season to all different teams. The game seesawed for the rest of the half before Chicago sealed the deal with yet more free throws, hitting six of eight down the stretch to put the lead at 10 with just 45 seconds to go. They would go on to win by nine.

The win over the Bears sends Chicago into the postseason with even more momentum than they had last year, when they were coming off the heels of a 18-game winning streak. The DIII tournament bracket was revealed yesterday, and Chicago was awarded home-court advantage for the first two rounds.

“It’s really exciting to be on our home court,” said fourth-year forward Morgan Herrick, who led all scorers on Saturday with a career-high 24 points. “I think we play better on our home court, and to be able to have the advantage of our own fan base and not having to travel is huge.”

Unlike the DI bracket, the DIII bracket does not have official seeds, so although Chicago is the heavy favorite in the region, they are not technically a number one seed. The tournament is also more regionally oriented, with certain regions featuring stronger teams than others. Chicago’s quarter of the bracket features #5 Calvin, #12 UW Stevens-Point, #13 St. Thomas, #15 Franklin, #16 UW-Eau Claire, and #25 Johns Hopkins. Wash U finds itself on the other end of the bracket, so Chicago would not play the Bears until the Final Four.

“We knew going into it that with the amount of good teams in our area, we were going to have a tough draw,” head coach Aaron Roussell said. “That was the case, but we wanted nothing more but to be at home, and we got our wish.”

The Maroons will first play Monmouth, and, if they win, will then play the winner of UW-Eau Claire and Simpson. As for Chicago’s goal, it’s pretty simple. According to fourth-year forward Meghan Herrick:

“We want to win a national championship, hands down.”