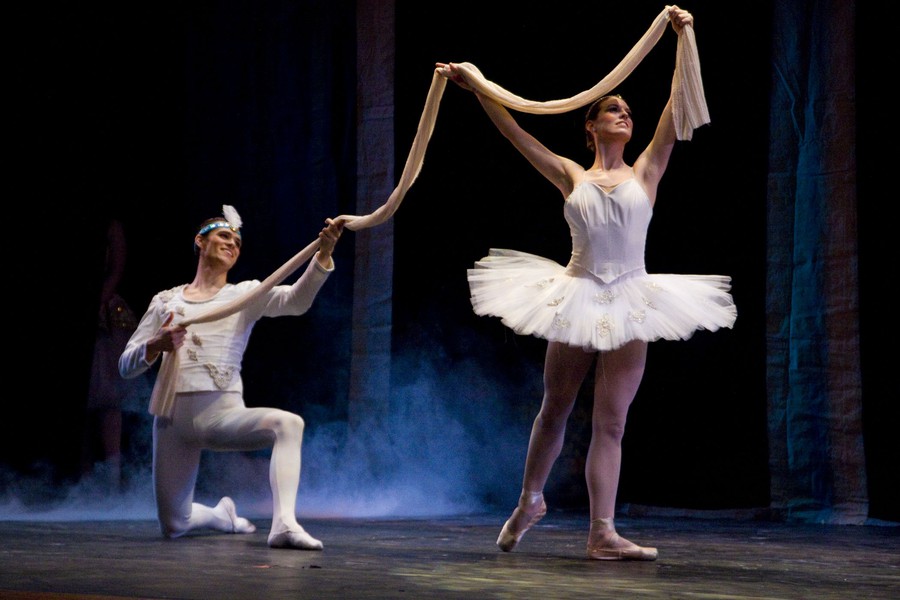 Of the many groups dedicated to the arts at U of C, the University Ballet of Chicago is one of the most noteworthy. This weekend’s performance of Marius Petipa’s classic ballet La Bayadère in Mandel Hall demonstrated UBallet’s remarkable dedication to professionalism among its dancers and commitment to the entire production.

Not quite as famous as Tchaikovsky ballets like Swan Lake and Sleeping Beauty, La Bayadère, featuring the music of Ludwig Minkus, is a tale of forbidden love set in India. Part of the ballet’s attraction is that it infuses traditional ballet elements with exotic sensuality, a not easy feat that UBallet pulled off admirably. Classic leg technique was combined with arm movements evocative of Indian dancing, and the dancers incorporated accessories such as scarves, fans, and drums (one dancer even performed with a golden statue on her head). A hypnotic aura, punctuated throughout the ballet by wild-haired fakirs, came to a climax in the famous Kingdom of Shades scene, where an opium-induced vision produced sixteen spirits or “shades” dancing in perfect synchronization. The dancers’ identical movements, performed on a staged wreathed in smoke, were simultaneously demure and eerie.

In the ballet, the beautiful temple dancer, or bayadère, Nikiya (played by Katie Grogan) falls in love with the warrior Solor (Matthew Walsh). The High Brahmin’s affection for Nikiya, as well as Solor’s involuntary betrothal to the Rajah’s daughter Gamzatti (Tiffany Hu), challenges their love, however. From the moment of her dramatic unveiling, Ms. Grogan was an enigmatic and delicate presence onstage. Whether she was portraying Nikiya as blissfully in love, haunted by betrayal, or as an airy spirit weaving across the stage, Grogan maintained Nikiya’s gentle appeal. Walsh, an emotive Solor, often served as Ms. Grogan’s compliment, guiding her through the pair’s most complicated lifts during their pas de deux. However, Walsh’s individual talent came alive during a solo dance in the Kingdom of Shades scene, where he executed a dizzying series of leaps and turns.

Where Ms. Grogan conveyed fragility as Nikiya, Ms. Hu, as rival Gamzatti and Grogan’s equal in dance skill, exuded the impenetrable confidence of a rajah’s daughter. The strength and triumph in her movements left no room for doubt that she would obtain the object of her desire. Similar refinement in technique was also visible in the ballet’s non-principle roles, including Jessica Lin as both the lively Golden Idol and the haunting shade. Her pas de trois with fellow shades Olivia Li and Sara Schwartz demonstrated the collective talent in UBallet, which extended to the majority of the performers.

The theatrical elements of the ballet also did not disappoint. The Indian-inspired costumes were rich in color and embroidery but still met the practical needs of ballet garments, while the elaborately painted sets transformed the stage into an opulent kingdom. The commitment to these visual elements undoubtedly heightened the ballet’s appeal to those with less of a technical appreciation for ballet, making the performance accessible for viewers in all forms.

Artistic directors Vivi DiMarco and Jessica Lin decided to stage the production such that elements from the original ballet as well as the Soviet and Natalia Makarova version were combined into the one performance, epitomizing the thoughtfulness that pervaded throughout the entire UBallet production. And clearly, UBallet’s attention to detail and demand for precision has paid off. If UBallet continues to uphold the standards set in La Bayadère, their future productions will delight ballet fans and casual viewers alike.