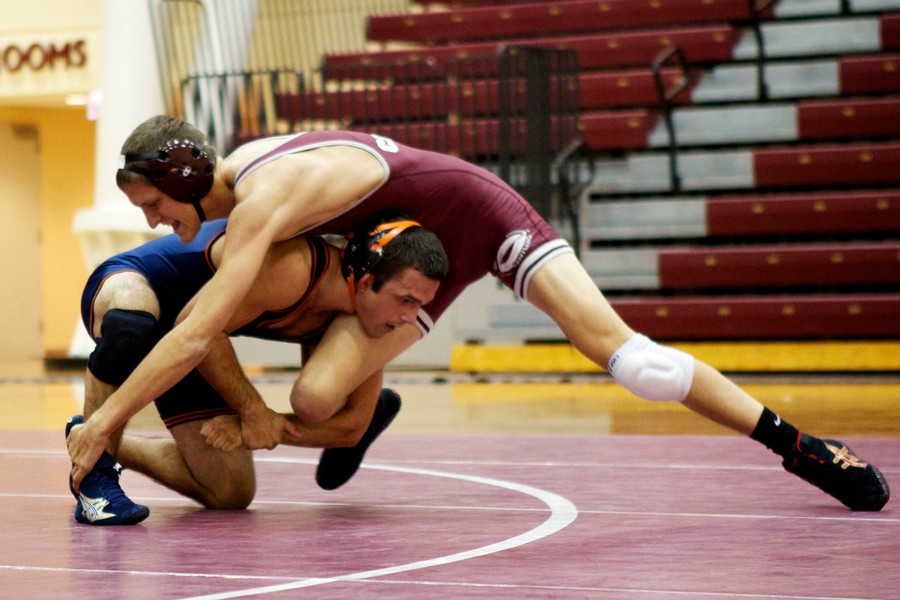 Despite missing several of their usual starters, Wrestling rattled off four straight wins to defeat North Central 25–16 in their last dual meet of the season. The Maroons pulled off the victory after coming back from a 16–6 deficit through six matches.

First-year Mario Palmisano (197 pounds) and second-year Jeff Tyburski (285 pounds) clinched the victory with consecutive pins at 6:56 and 6:42 in their respective matches.

“We really needed Mario Palmisano’s pin because it put us in a very good position to win the dual,” said Leo Kocher, the Maroons’ head coach. “Pins are good, but pins when you really need them are even better.”

Ryley Hankenson’s major decision at 174 pounds brought the Maroons within six, and Sam Pennisi’s close 8–5 decision at 184 pounds truly turned the meet into a close contest.

“Everyone just focused on doing their job,” Kocher said about his team’s response to their early deficit. “I figured it was definitely winnable.”

There was plenty of interest in the earlier part of the meet, as well. First-year Willie Long managed to earn two takedowns in the last 10 seconds at 133 pounds to eke out a 7–6 victory.

Second-year Jacob Smith filled in at 141 pounds against the nation’s fifth-ranked wrestler in the weight class, Andrew Zobac, a trial of fire for Smith, who was coming back from a two-week injury lay-off. Zobac triumphed with a 20–5 technical fall, but Kocher remained positive about the match.

“Jacob learns as well as anyone from going up against tough people like that,” he said.

The Maroons were missing five wrestlers who typically factor into lineup considerations at dual meets. Those missing in action were third-year James Layton, who has been having a strong season, second-years Ryan Klein and Josh Lowry, and first-years Joseph Ruettiger and Joe Ellis, each of whom has shown himself to be competitive.

The exciting victory puts the Maroons’ final record in dual meets this season at 7–5. Chicago competes this Saturday at Case Western for the University Athletic Association (UAA) Championship, where they will face both the hosts and New York University in a pair of dual meets. The Maroons are the three-time defending champions and have failed to win only twice in the last 12 years; a victory on Saturday would be championship number 16.