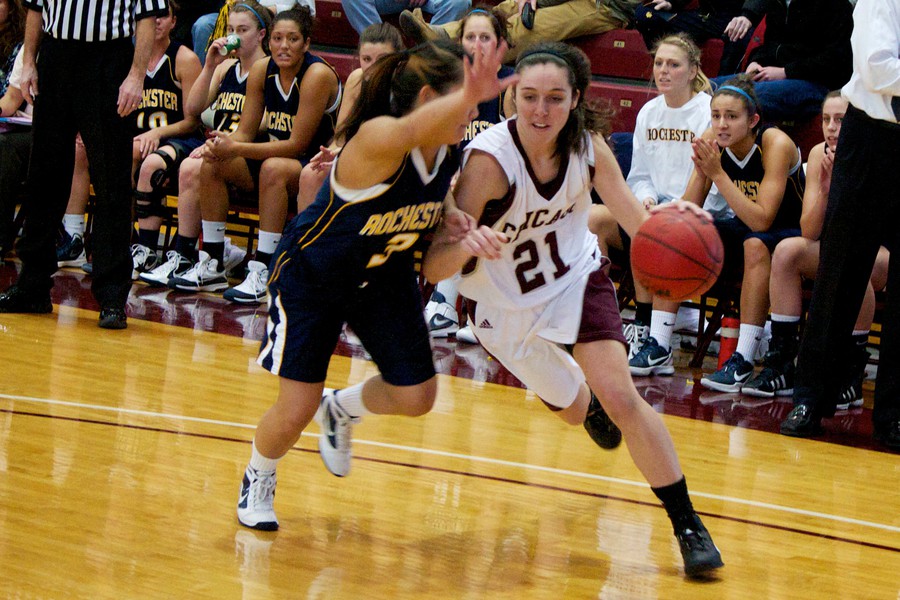 The Maroons found themselves in an odd place on Sunday, trailing at the half to fifth-ranked Rochester 25–31. It was the type of close game that D-III basketball pundits had predicted would take place a week earlier, a hotly contested battle between two of the best teams in the country. Rochester used their size to their advantage, out-rebounding Chicago 24–19 in the first half. They also bothered the Maroons to the tune of nine turnovers, leading to 10 points. Finally, it seemed like Chicago had met a team they couldn’t just run out of the gym, as they had done all season to a variety of opponents.

“We got outworked and outhustled the first half. Rochester is a very good team, so there was definitely a sense of urgency within the locker room at halftime,” said fourth-year forward Morgan Herrick, who scored a game-high 19 points to go along with seven rebounds.

The one bright spot in the half was the play of Morgan Donovan, a first-year guard who has seen significant time at the point guard position this year. In just eight minutes in the first half, Donovan put up four points to go along with two steals.

“If it wasn’t for Morgan, we would have been down by a lot more at halftime. She gave us the spark and energy we needed in the first half to stay in the game with Rochester,” Herrick said. “[She] played one of the best games I have seen her play this year.”

Chicago came out of the gate hard at the start of the second half, going on a 15–9 run to take the lead. Chicago didn’t let up after regaining the lead, and back-to-back scores from Donovan pushed the advantage to six. Chicago began to resemble in the second half the dominant team they had been all year, holding Rochester to only 24 points off 22 percent shooting, while scoring 43 points themselves to defeat the Yellowjackets 68–55.

Unlike Rochester, which played a much closer game on their home floor, Emory had just as difficult a time scoring at the Woodruff Physical Education Center as they did at Ratner. Emory scored just 25 points in the first half off 32 percent shooting from the field, and once again, Chicago was able to contain scoring dynamo Hannah Lilly, limiting her to a paltry six points. Chicago never trailed throughout the contest and led Emory by 15 points at the end of the first half. They would go on to win 79–55, a 24-point margin.

UChicago took their record to 19–0 with the win, the team’s best record since the program’s inception 41 years ago. The game was historic for another reason as well; with a jumper a little more than two minutes into the second half, fourth-year Meghan Herrick joined her fourth-year teammate Bryanne Halfhill in the 1,000–point club, which has only eleven members.

With only five games left on the schedule against teams that Chicago has already beaten this year, fans and pundits alike are predicting an undefeated season for the Maroons. The chatter hasn’t quite crept into the locker room just yet.

“It’s just not something that we’re focused on. It’s never been a goal of mine,” said Aaron Roussell, the Maroons’ head coach. “Quite simply, and this is boring, but we just want to win the next game. I think there’s a difference in wanting to win your next game as opposed to winning all of them.”

After a weekend on the road, UChicago will return home Friday to play Carnegie Mellon, a team they decimated in a 37-point blowout on the road. Two days later they’ll play Case Western, the team that has offered the most resistance on the UAA schedule so far. Chicago trailed by as many as 13 against Case before pulling ahead in the second half and holding off a late run.