Even nudity can't save this movie. 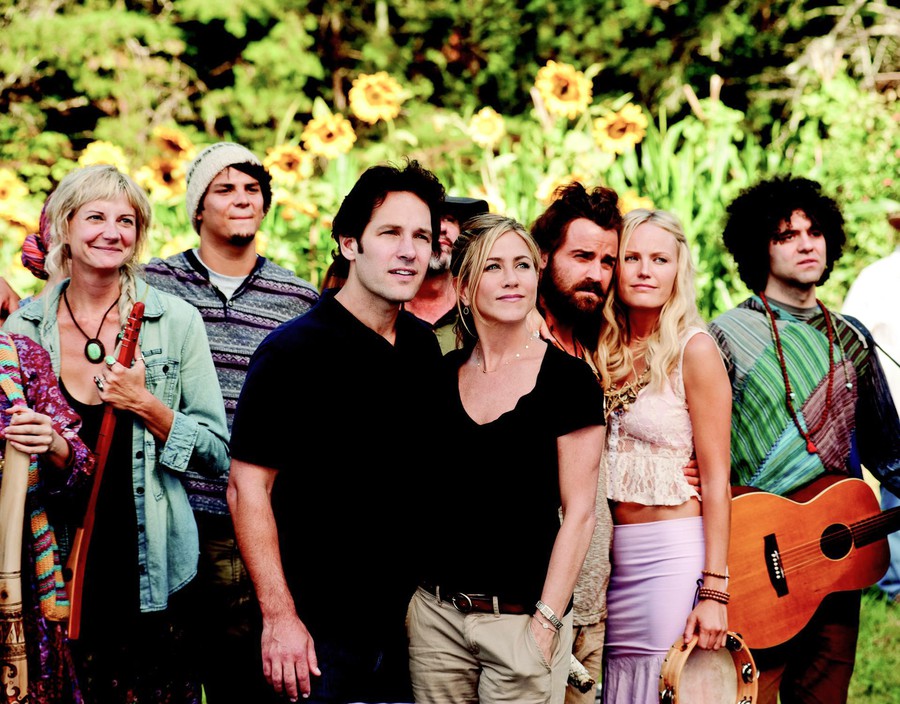 Have you ever been to a bad stand-up show? Where the entire night is just one prolonged moment of awkwardness, with the comedian standing onstage gripping his mic, sweating under the heat of the spotlight, squirming and looking at you with eyes that say, “Please, laugh. I beg of you—just titter, even!”? And then after what seems like years, you and your friends get up and give each other that wide-eyed stare and choke down your laughter until you’re safely in a booth at Applebee’s for half-off appetizers. Only then do you look at each other and go, “God! That was the worst.”

If David Wain’s Wanderlust was a stand-up show, it’d be one of those—not so bad that you laugh through your cringing, but bad enough to make you regret the money you wasted for admission.

On paper, Wanderlust had all the pieces to be a relatively successful comedic whole—Wain’s 2008 hit Role Models, also starring Paul Rudd, was a crowd-pleaser and was considered a general box office success. Jennifer Aniston would appeal to a faction of viewers not swayed by the Apatow producer credit alone. Add a socially-relevant backdrop—recession—and a slew of highly-esteemed comedians, and you’ve got yourself something promising. In theory.

Wanderlust operates on a straightforward, though overdone premise. George and Linda (Rudd, Aniston) are happily married and successful New Yorkers who’ve just bought a “micro-loft” in the West Village. Linda freelances, having most recently made a documentary about penguins with testicular cancer, while George is the business-y, suit-wearing type perpetually on the cusp of getting a bonus. All’s well for the couple, outside of being so busy that they literally fall asleep atop each other while trying to break in the new digs. But alas, tragedy strikes, and George’s office gets shut down by the Feds while HBO refuses to pick up Linda’s documentary on the basis of its criminally depressing subject matter (add more boobs and sex, advises the steely HBO exec). No longer able to afford a Manhattanite lifestyle, the couple hightails it to Georgia, where George has a job lined up with his domineering and insufferable brother. But car trouble on the way lands them at “Elysium Bed and Breakfast” instead, a free-loving rural commune staffed by the some of the hottest hippies you’ll ever meet. One thing leads to another, and George and Linda decide that perhaps free -range living is their best option, if only for a couple of weeks.

The first problem with Wanderlust is that everything described above happens in about 20 minutes. The movie inexplicably operates at a breakneck pace, with George and Linda in their apartment and out of it before anyone can utter the words “character development.” If Wain, who co-wrote the script, had been hastening to any particular conclusion, I might have understood the film’s briskness. But it goes nowhere,—and certainly not to any place you didn’t expect it to go from the trailers. The only time the movie slows down, is when it finds itself in the midst of a shamelessly unfunny joke; Wain’s style is all about prolonging the moment just a few beats past expectation. This might have worked if the featured jokes were actually funny. Instead, it’s just reel after endless reel of the usually charming Rudd beating the same dead horse. Or maybe, more accurately, clubbing the same dead baby seal.

You might think the fact that the movie revolves around a commune would open the door for Wain to explore, albeit comically, a few ethical issues here and there. Why exactly are these people living in a commune, after all? Surely it can’t be just be for the free love and the freer drugs. Well, apparently it is. That, or the optional clothing policy. As for character complexity, yeah, right. How can there be time for that, when there’s so much slow-motion bouncing old penis to be featured? A solid eighth of the film is Paul Rudd staring at himself in the mirror, mouthing variations of the phrase “suck my dick” in various accents. At one point, a woman goes into labor and delivers her own baby in the space of three minutes—all on a patio, without any water breakage. The crown jewel, however, is when the movie actually recreates a classic YouTube video. Is this really what modern comedy has come to?

In reality, it doesn’t matter so long as the right names are attached. In Wanderlust’s case, the names are as right as they can be for America’s tastes—Rudd, Apatow, and to a degree, Wain. People will insist on seeing Wanderlust and the hordes of other flicks churned out by this brosephy powerhouse, the crux of which is being a voice for the awkward, “average” men of America. Some of them will do it better than Wanderlust, others worse. But when the biggest hype surrounding a movie in its advanced release press junkets is whether or not its female lead will finally go topless, make sure you leave your standards at the theater door. To do otherwise would be the biggest laugh of the night.