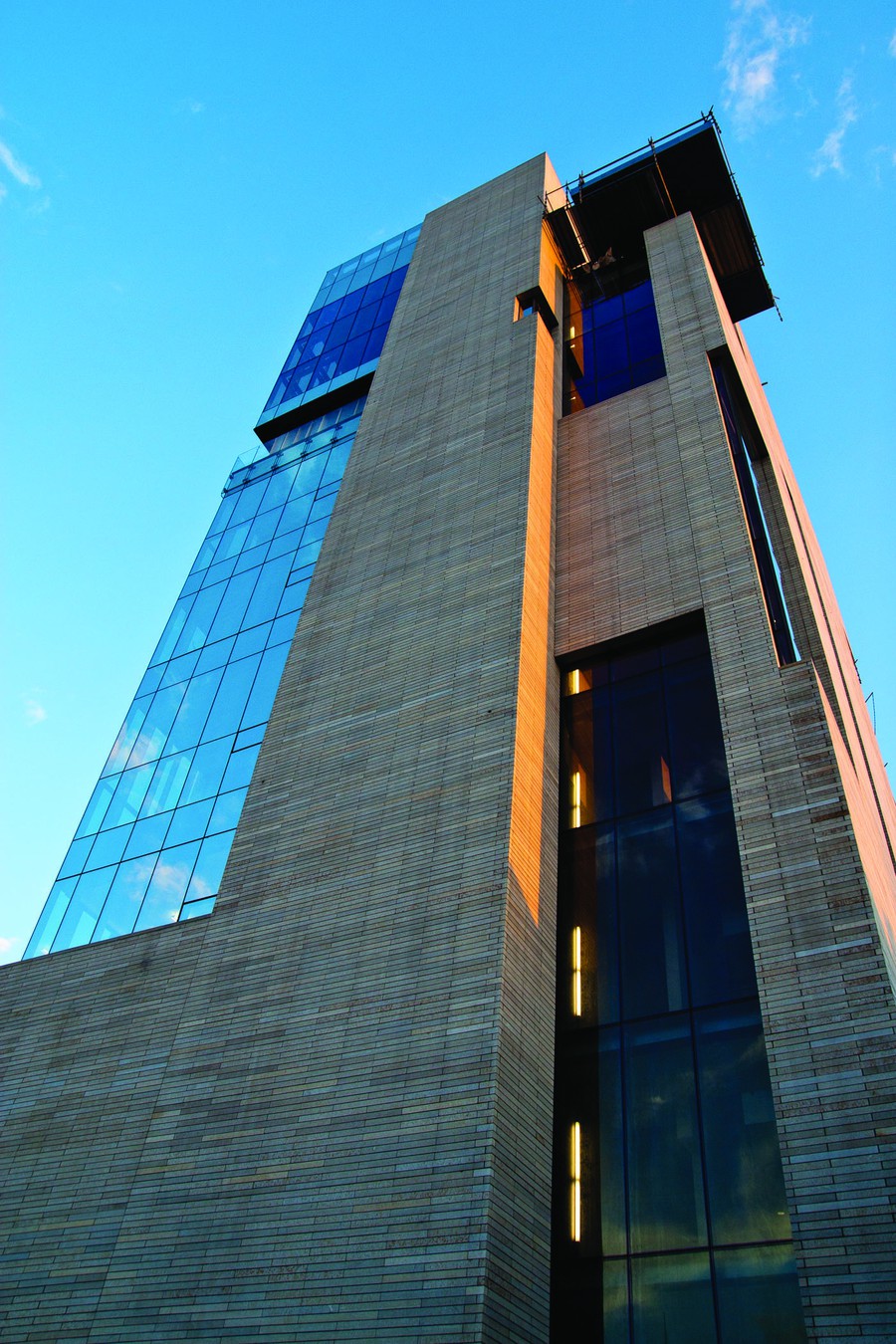 The Reva and David Logan Center for the Arts aims to consolidate the arts on campus.

At a height of 12 stories, the Reva and David Logan Center for the Arts casts a new, definitive break in the longstanding horizontal expanse of the Midway Plaisance. In the daytime, a chalky white, rectangular block towers over the surrounding roads and foliage, now blooming back to life in the sunshine. At nighttime, the structure glows with a sort of spectral light that pours out of the building’s many glass panes, giving it a remarkably futuristic appearance. The University of Chicago’s other recent architectural feats, the Joe and Rika Mansueto Library and South Campus Residence Hall, also boast spacious, brightly lit, and ultra-modern designs. The new style stands in sharp contrast to the solid, immutable neo-Gothic buildings that have framed the main quadrangle since the turn of the 20th century.

The lovably dilapidated Lorado Taft Midway Studios, recognized by their cheerful red doors and earthy brick exterior, sits complacently adjacent to their glitzy successor. At the start of this quarter, all art classes were relocated to the Logan Center with the exception of creative writing courses, which are now held in the old studios. The older building offered its occupants a woodshop, a small kitchen, a handful of student studios, and several classrooms whose walls and floors abound with splatters of paint, pencil marks, and other markings. The new building houses four performance venues, a gallery space, digital media labs, terraces, 14 classrooms, and over 90 studios and practice rooms-- not to mention hot water, to many a Midway veteran’s delight. The building’s completion has also garnered a significant amount of local media attention. “...as the biggest, newest and soon-to-be most visible arts nexus on campus—if only because its tower will rise 170 feet, making it a kind of beacon—the Logan will raise certain expectations,” wrote the March 22 issue of the Chicago Tribune, for example.

The Logan Center presents all these resources in an entirely different architectural layout. Sleek and minimalist, this new artistic playground relies heavily on the concept of negative space. By welcoming student and professional artists alike into what in essence appears to be an aesthetically pleasing skeletal structure cast in a monochromatic, minimalist style, the University expects the artists themselves to fill the building with creative life. The ultimate goal is for the Logan Center to serve as an ultra-personalized, exact reflection of students’ artistic needs while simultaneously becoming an artistic hub for Chicago.

Compliments abound for this new artistic endeavor, which--from its original conceptualization to its official completion next autumn--has been on the University’s radar for over a decade. “I was blown away by the facilities and equipment,” said Jason Gold, a first-year in the College. “The building is beautiful; it’s open, it’s freeing. It’s clear that the University is really trying hard for the students to have everything they need and more at their disposal to do amazing things.”

However, the Logan Center is not without its faults. Perhaps the most common complaint is that the novelty of the building carries with it a much larger burden than simply requiring the students to “warm up” to the place. When asked about her opinion of the Logan Center in relation to its predecessor, Whitney Chi, a recent graduate of the College, replied, “There’s something particularly corporate about the Logan that I don’t like. That it has a mission—to consolidate the arts on campus—is rather noble, but at the same time it makes it stiff and bureaucratic. Personally, I really liked Midway Studios because it was unpretentious. I guess that’s what made it welcoming and an inspiring place to work in.”

Meanwhile, other students greet this consolidation with a breath of relief. Zoe Petticord, a staff member of the Department of Visual Arts, said, “Midway just didn’t have enough space for everyone: The MFA studios were all over the place, and the DOVA temporary gallery was all the way up on 53rd.” Other students have responded more positively to the building.

Additionally, there are some fundamental structural complications, particularly involving the layout of the studios given to art majors. Fourth-year 3-D artist David Nasca plans to move out of the studio space provided at the Logan Center, opting instead for the older, more homey MFA-occupied studio house, “Doomsday.” “The main reason I’m moving out is because there are eight studios and nine majors,” Nasca said. “There are issues that I have with the studios, because they’re more like cubicles, which raises a few problems: For instance, you can’t play music, because noise travels in the space, and you can’t control your own lighting. However, I wouldn’t have decided to move out if I didn’t have to share a studio.”

For most students, however, the immediate gripes raised against the newest architectural addition to the University of Chicago are temporal ones. The issues of sterility, of an environment too stripped of character to truly maximize creative thought and production, are primarily a matter of growing pains, mixed with a bit of nostalgia. Gone are the days of working late into the night under a rattling two-story roof, surrounded by tubes of paint, scraps of paper, and other supplies strewn about the building. No longer does the artist face the intellectual challenge of overcoming an apparent lack of physical space amidst the clutter, or the omnipresent chill and distinct howl of a cold winter draft pushing through unseen cracks in the structure of the building, or even the occasional inexplicable eerie noise echoing from somewhere in the shadowy depths of the studios. Though these defining characteristics of the old Midway Studios might give the casual reader goose bumps to simply imagine, for the student artists who spent countless nights under such conditions, they became fond and necessary catalysts for artistic inspiration. For many students, it is difficult to imagine engaging in the creative process without these characteristics.

“The studio spaces in Midway provided a freedom to be messy... This same freedom has yet to be established in the Logan Center,” fourth-year Stephanie Flores said. “That being said, this is its first quarter [the center is] being used as an arts space, and I would encourage all underclassmen to take advantage of it as I think they—moreso than the graduating seniors who have 10 weeks to work with the building—will be able to shape the kind of culture that will eventually take root there. The Logan Center has provided a space, and I think that it is up to our faculty and our students to make it into that ‘hub for arts’ that it sets out to be. Personally, I think that is both an exciting prospect and a challenge.”