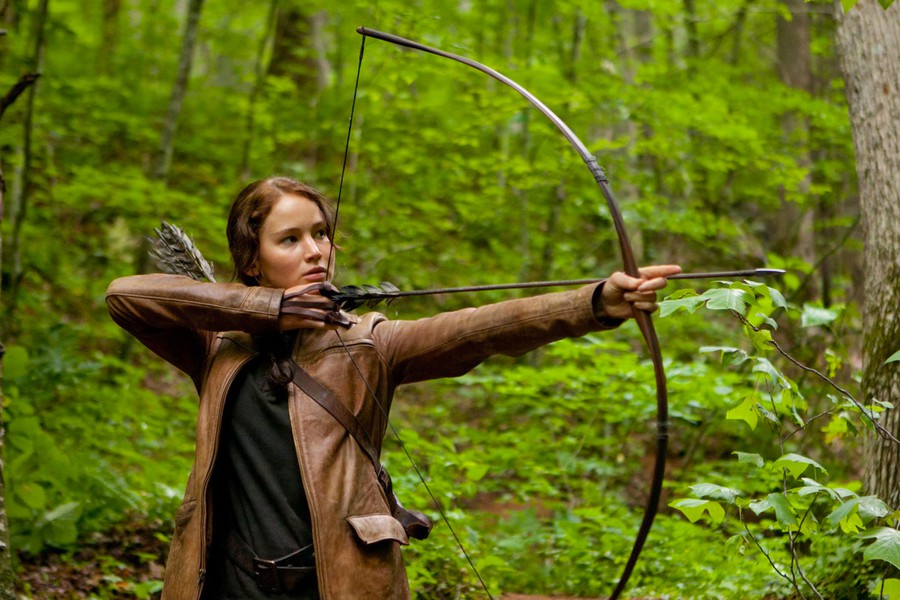 Jennifer Lawrence as Katniss Everdeen goes in for the kill in The Hunger Games.

As the most anticipated, new young-adult franchise—thanks to the conclusion of the Harry Potter and Twilight films—The Hunger Games represents both a new story and a new fan base. More political than either of the other YA box office cash cows due to the dystopian nature of its source material, The Hunger Games argues vehemently against state control, the folly of mass entertainment, and the wastefulness of excess. Though moviegoers might be drawn to the movie more for its blood and gore than for its current political themes, it’s impossible to leave the theater without considering the latter’s on-screen importance. Keeping its record-breaking opening weekend in mind, it is important to see this film not just as another action-adventure movie, but also as an astute indicator of an American zeitgeist that simultaneously celebrates and admonishes spectacle.

Katniss Everdeen (Jennifer Lawrence), a heroine devoid of any of the typical sentimentality, cares for her heartbroken mother and eleven-year-old sister, Primrose (Willow Shields). The film opens with her hunting and preparing for the “reaping,” or the selection of tributes from District 12, where she and her family reside. Due to a violent civil war, the Capital requires each district in the nation, Panem, to provide two tributes, one boy and one girl, to compete in the annual Hunger Games, where the twenty-four contestants battle to the death until there is one survivor and champion. Brutal and dramatic, the Hunger Games make excellent television and are broadcast live to every district in Panem.

When Primrose is selected as the female tribute, Katniss volunteers to take her place. Gale (Liam Hemsworth), her dark and handsome friend, watches her walk up to the stage while holding back a screaming Primrose. Peeta Mellark (Josh Hutcherson), blond and sturdy, becomes the male tribute from District 12. Gale, Peeta, and Katniss eventually form an awkward but attractive love triangle, which proves to be sexier than that of the Harry Potter trio and more cynical than the Twilight rendition. Peeta and Katniss train in the Capital before heading to the Games. Once there, the movie takes a more brutal turn, as the tributes begin to kill each other until the Games (and film) are over.

The star-studded cast also includes Woody Harrelson, who plays Haymitch, a drunkard who once won the Games and acts as mentor and advocate for Peeta and Katniss. Lenny Kravitz plays Cinna, Katniss’s stylist, with just the right amount of flair (thanks in part to some gold eyeliner) and a rock-and-roll edge. Elizabeth Banks is unrecognizable as Effie and Stanley Tucci plays the blue-haired host of the games, Caesar Flickerman, with aplomb. Donald Sutherland plays a cool President Snow, setting up a true villain for the next three films in the series.

Some characters from the books were eliminated or reduced, as is the case for nearly all film adaptations. Fans might complain about these changes or others (where one of Katniss’s lethal arrows might land, lines of dialogue, the missing references to particular dishes of food), but with Suzanne Collins as co-screenwriter with director Gary Ross, the adaptation is extremely loyal in content and tone. In fact, I cannot help but wonder if this commitment to loyalty made the dialogue clunky at some points in the film, where the characters explain more than interacting.

I will address the music of the film—or rather the music associated with the film—more specifically. The majority of the songs on The Hunger Games album do not play in the film, representing the film’s overall tone rather than specific scenes. Taylor Swift, The Civil Wars, The Decemberists, Kid Cudi, Miranda Lambert, Arcade Fire, and others contributed to the album, attempting to create a diverse sound that appeals to a greater audience than just tweens.

It is important to note the soundtrack in particular because it shines light on some of the major forces of The Hunger Games—a distinctly American franchise created for young audiences but meant to engage people of all ages. Though some of the dialogue and romance is clumsy, the film as a whole is elegantly shot, thought-provoking, and sure to be popular for the next several years. And if audiences find it uncomfortable to eat fistfuls of popcorn while watching a blockbuster film about a television program in which teenagers starve and kill each other, then the film has made its point perfectly.