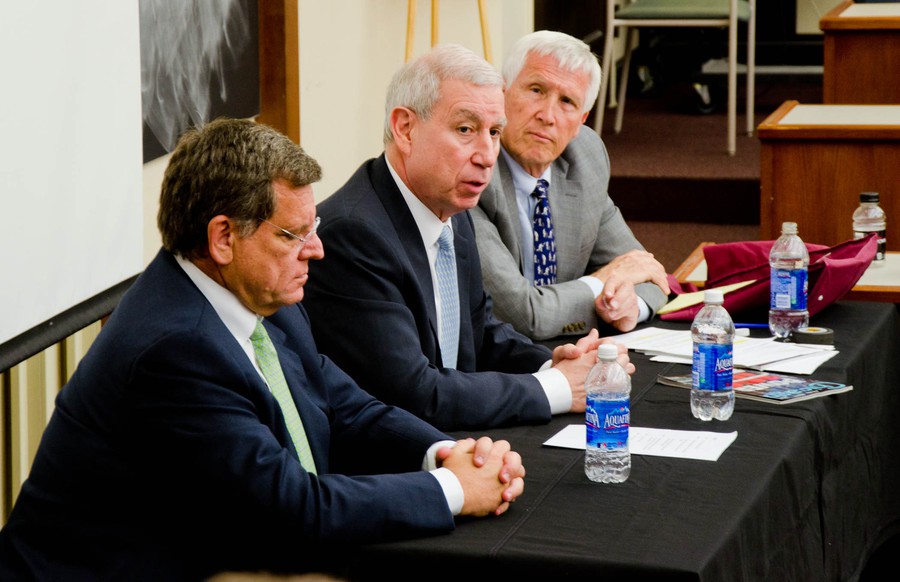 The University of Chicago Sports Business Team (UCSBT) hosted a talk from the management team of the Chicago Blackhawks last Wednesday night. Blackhawks President and CEO John McDonough and Chairman W. Rockwell Wirtz discussed their success in the sports management industry and described their roles in the Blackhawks’ rise from one of the NHL’s most forgettable franchises to the 2010 Stanley Cup champions to a room full of aspiring sports professionals.

McDonough was appointed Chicago Blackhawks president in November 2007 and became CEO in the summer of 2011. Wirtz, whose family bought the Blackhawks when he was two years old, took over for his father as chairman in 2007. Their impact was almost immediate.

What’s amazing about the rise of the Blackhawks team on the ice was how closely it was tied to their growing popularity off it. And the responsibility for that popularity fell squarely at the feet of Wirtz and McDonough. The pair quickly secured partnerships with Comcast SportsNet, WGN-TV Channel 9, and the radio station WGN Radio AM-720 after their takeover. A major sports team in a major city getting major television and radio deals may not seem like news, but to understand its true significance one must only glance at the numbers.

Comparing that to the Blackhawks record on the ice—31–42–9 in the 2006–7 season and 52–22–8 three years later—it is clear that McDonough and Wirtz’s influence has affected more than just the number of fans in seats.

Given the obvious success the two have had, they seemed like a perfect fit to speak to the UChicago Sports Business Team, an RSO dedicated to bringing in speakers from the sports industry, building connections within the city of Chicago, and releasing the first issue of their quarterly magazine by the end of Spring.

Scott Southern, UCSBT’s Head of Management & Agency, got in touch with the Blackhawks’ management team and was able to communicate with Wirtz’s secretary. Within a few months McDonough and Wirtz were headed to the South Side.

The main aim of the talk was to describe the Blackhawks’ remarkable success story and how it was made possible through the business decisions of the management team. It’s certainly an amazing story, and there was plenty for UCSBT to take from it.

“You had to start somewhere,” Wirtz stated, explaining his team’s approach to acquiring sponsorships. “And if people believed in you—that you were going to actually care about the people, care about being something big, and if you were going to hire people with a single-minded determination, that we were going to unconditionally win no matter what it takes…. That was the beginning of starting those relationships.”

What sets the Blackhawks’ story apart from most others is its successful conclusion.

Wirtz’s rhetoric may seem misplaced elsewhere, but what’s notable is that he and his team were clearly able to make people believe in them, and, what’s more, they managed to justify that belief.

The Blackhawks’ success didn’t end with their Stanley Cup win in 2010, either. They have led the NHL in average attendance in the two seasons since their championship and are hopeful of getting back into the playoffs this year.

Where they will go from here remains uncertain, but the efficiency and efficacy of their work is undeniable and the benefits look set to last into the foreseeable future. They have found, it seems, the perfect balance between sports and business.