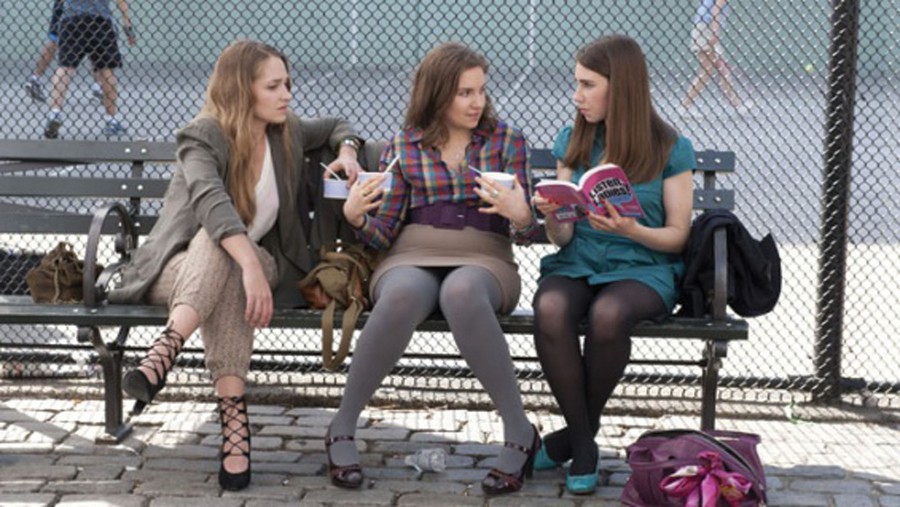 Last night Max Palevsky Cinema was filled with dozens of viewers eager to watch Doc Film’s preview screening of HBO’s newest original series Girls, a coming-of-age comedy about four girls in their early 20s living either together or in close proximity to each other in New York City. The show—directed, created, written, and starred in by 25-year-old Lena Dunham—has already garnered its fair share of grief and gossip from overanxious critics who have prematurely touted the show, which will premiere on April 15, as a younger, less-employable Sex and the City.

The fact that three of the four leading ladies (Jemima Kirke, Allison Williams, and Zosia Mamet) all have famous fathers (Simon, Brian, and David) has only served to lend the show an up-and-coming, sexy mystique. Lena Dunham herself has plenty of indie cred to spare after writing, directing, and starring in 2010’s Tiny Furniture, which won Best Narrative Feature at South by Southwest that same year. Throw a couple of hit-making executive producers into the mix—Jenni Kroner (of the TV series Help Me Help You and In the Motherhood) and Judd Apatow who is well-accustomed to turning out successes like Superbad (2007), Pineapple Express (2008), and Bridesmaids (2011)—and you’ve officially got yourself an unaired, but much buzzed-about show. And if that wasn’t enough, everyone is aware that HBO knows good sex (and isn’t afraid to ask).

However, what I saw, as I laughed and cringed through the first two episodes of Girls, was anything but Sex and the City, minus 10 years and a few cosmos. What I got was a bleak look into my own future. Okay, many college graduates’ possible futures. Lena Dunham plays Hannah Horvath, a 25-year-old unpaid intern who is four essays into writing her first book of nine essays. The next five essays are imminent, but she’s writing a memoir, so she has to live them first. Hannah rooms with her best friend Marnie (Allison Williams) who is hell-bent on ending things with her insufferably nice and gentle boyfriend of four years who says things like, “I just blew up a kiss on you.” This is couple number one that has terrible, graphic, hilarious sex on Dunham’s show. There is much more of this sort of thing to come.

In the opening scene of the first episode, Hannah is out to dinner with her conservative, well-meaning parents who are in town to tell her that they’re cutting her off financially for good. “We can’t keep bankrolling your groovy lifestyle,” says her concerned and embittered mother. Later that day, Hannah has sex with her fuck buddy (come on, this is HBO) Adam and can’t stop talking about her resume the whole time. In this regard she is less Carrie Bradshaw, more Larry David. (She also does things like make rape jokes during a job interview. As previously stated, she is currently unemployed.)

Sometimes the comedy can undermine the “real world” feel of the show. Hannah’s British, Francophile friend Jessa (Jemima Kirke) is a free spirit who just finished a pearl-shucking gig and a brief romance with a surfer, but her antics are way too predictably random to be actually entertaining. Shoshanna, Jessa’s cousin and another one of the leads, is such a hyperbolic caricature of a young woman in a pink jumpsuit who talks really quickly about nothing at all because she’s just that insecure, that she barely seems human: certainly not interesting.

It’s those quirky little moments though, which effortlessly blend outlandish situations with poignant, everyday emotion, that make this show worth watching, despite the noticeable dearth of Manolo Blahniks. Like the time that Adam, after having fantasy-fueled sex with Hannah in which he pretends that he is a junkie and she an 11-year-old girl, offers her a Gatorade. Or like the moment you realize that Hannah majored in English in college, Adam in comp lit.