Feast or famine in weekend outing 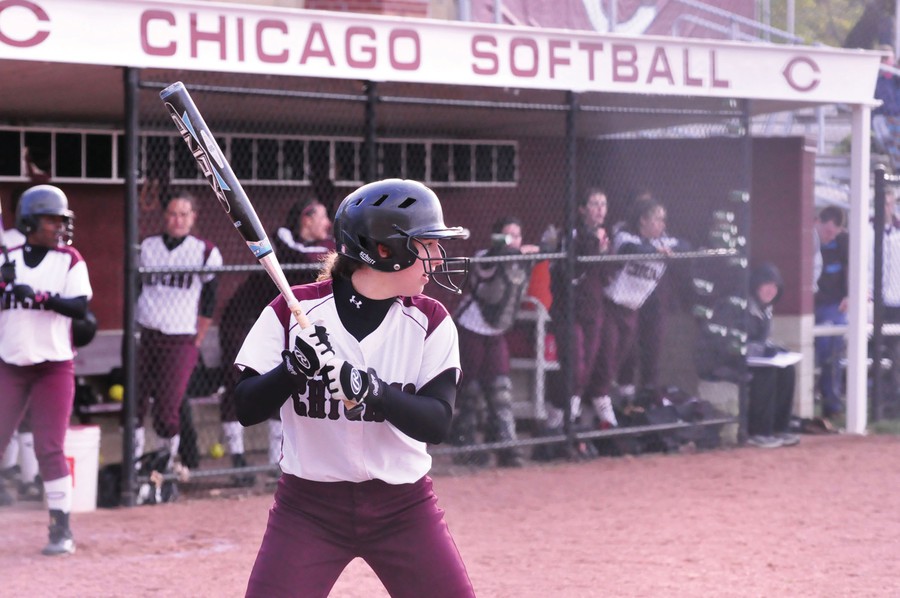 What a difference a day makes.

The Maroons put together two of their best overall performances in a doubleheader at Lawrence (5–11) last Friday, with their 11–1 and 14–3 victories both so dominant that they were cut short by the mercy rule.

“[On Friday,] we played well in all facets of the game, and…played at the level we are capable of,” head coach Ruth Kmak said. “On Saturday, we had the opposite of Friday…. We did not play with the confidence that allows us to compete at our level.”

Chicago found its hitting form in the second half of their first game against Lawrence, blowing open the game with three runs in the top of the fourth to stretch their lead to five. Fourth-year Liz Payonk led the charge with four RBIs on three of the Maroons’ 16 hits. First-year Raechel Cloud and fourth-year Julia Schneider contributed another three hits each to help fourth-year Sarah Neuhaus (5–3) earn the win for four innings of three-hit ball. First-year Tabbetha Bohac pitched a scoreless final two frames.

The Maroons piled on the runs late in their first fixture with Lawrence, plating five in the sixth and final inning, and their impressive offense carried over into the nightcap. The South Siders scored three in the first inning,and didn’t have a single scoreless frame. First-year Emily Ashbridge (1–1) picked up her first career win for her three innings of work, after third-year Kim Cygan (8–2) started the game off throwing a pair of scoreless innings. Chicago’s offense was humming top to bottom, but Bohac shined in particular, getting four RBIs on a 3–3 performance at the plate to cap an impressive pair of games by the team’s three first-years: Cloud, Bohac, and Ashbridge.

“Our first-years have done a very nice job…. All three have solid work ethics and great attitudes,” Kmak said, praising Cloud’s consistency on offense and defense, Bohac’s versatility on defense, and Ashbridge’s development on the mound.

The Maroons had their best scoring chance in their doubleheader against UW–Oshkosh in the second inning of the first game, getting Cloud and Payonk in scoring position with two outs but leaving them stranded.

“We didn’t finish when we had runners on early…and that set the tone for us psychologically,” Kmak said.

The Titans scored both of their runs in the bottom of the third, breaking Cygan’s 21.1 scoreless innings streak and handing her the loss, even as she pitched a complete game five-hitter with both runs unearned. Cygan has now allowed only one earned run in her past 45 innings.

Neuhaus performed similarly well, going the distance and allowing the nightcap’s only run on a solo home run by UW–Oshkosh’s Emily Mallek in the third inning. The Maroons mustered only five hits between the two games; only Payonk had more than one. In the first game, the Titans’ Courtney Wautier (9–3) pitched the full seven innings, and in the second, Julia Sweeney (4–4) allowed only two base runners to earn the complete game win.

The Maroons are in action at Stagg Field today at 3 p.m. for a doubleheader against North Park (17–5). In their first home game in 15 days, the Maroons will look to shake off their malaise at the plate and regain Friday’s form in what may prove to be a shootout: The Vikings have won 10 of their last 11 games and have scored just under 10 runs a game in their past six.