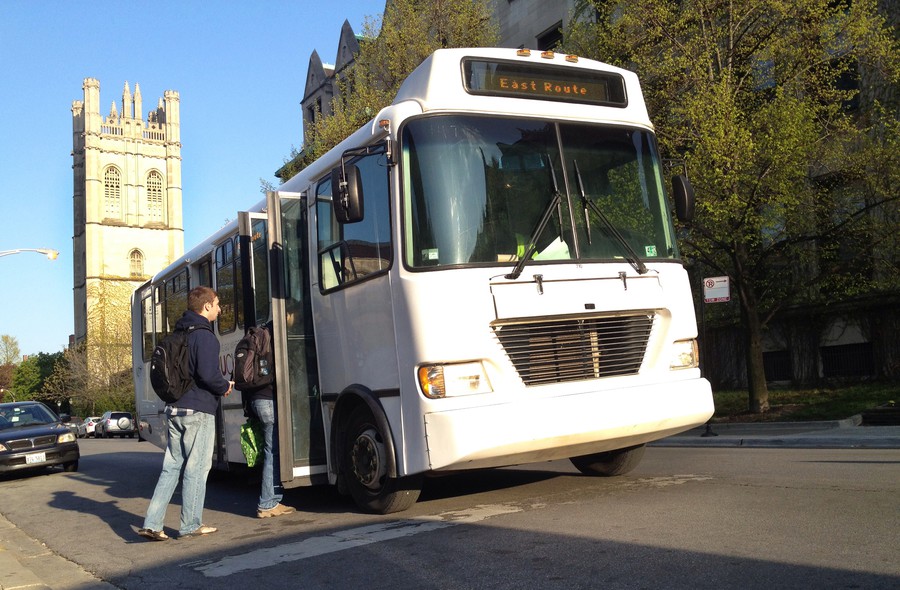 In response to a high volume of complaints about excessive wait times, administrators have decided that they will suspend SafeRide this fall, replacing the late-night shuttle program with expanded service on existing evening routes.

Students will no longer be able to call a SafeRide dispatcher to request door-to-door service. Instead, evening shuttle routes will begin an hour earlier—at 5 p.m.—and will continue until 4 a.m. for most of the week. On Thursdays, Fridays, and Saturdays, shuttles will run even later, until 6 a.m.

The five vehicles currently used for SafeRide will serve as evening shuttles, but Director of Parking and Transportation Theresa Brown declined to say if there would be a new route or if the area covered by the evening routes would be expanded.

Brown said that certain specifics of the program will rely on feedback she and her colleagues will solicit from students during a pilot for the changes, which will run from fall until next spring.

“We are proposing a lot of different things,” she said. “We will be utilizing the [SG] Transportation and Security Advisory Board (TSAB), SG, student consulting groups, and students to tell us where shuttles should operate.”

The Department of Parking and Transportation decided on the changes after students complained about waiting for SafeRide sometimes for as long as an hour. The average wait time for SafeRide is 55 minutes, according to SG President Youssef Kalad.

“The vast majority of students want something that’s consistent and reliable, even if you can’t be picked up right where you are,” Kalad said. “If the wait time is 50 minutes, it’s not safe,” he said.

Talks about the pilot between administrators and students on the TSAB began in February, Brown said in an email, and further details in the program will be discussed at the board’s meeting next week.

Kalad conceded that there were “downsides” to the new system, which, he said, could make it more difficult for students in secluded parts of campus to get shuttle service.

Moreover, Kalad said he has heard from students who feel secure using SafeRide, despite its longer wait times. Brown also said that, under the new system, students may have to transfer shuttle routes to reach their final destination.

Ultimately, however, Kalad said that the reliability of shuttles on a set schedule and route will make students safer. All shuttles will be trackable using the popular TransLoc online app, a function SafeRide currently lacks, Brown said.

Fourth-year Evan Weingarten said that, one time, he waited 40 minutes for SafeRide before deciding to walk to his destination instead. He said that students who have a legitimate need for SafeRide often wind up waiting for a long time because others misuse the service.

“SafeRide devolves into a party van for people, which is unfortunate,” Weingarten said. “People use it as a way to avoid the cold and minimize the time between the party and their door.”

First-year Nicholas Parker said he was recommended during O-Week to take SafeRide if he ever felt uncomfortable and that it was often used by students too drunk to walk home.

Still, the few times that Parker has tried to call SafeRide, he has wound up walking because the shuttle took too long to arrive. Parker said that he thought the proposed shuttle service could make evening travel more efficient.

Weingarten added that the East evening shuttle route chronically falls behind schedule and that additional shuttles could help improve timeliness.

Last year, more than 500 people signed a Facebook petition circulated by four graduate students complaining about SafeRide. In response, SG hosted an open forum with then-Director of Transportation Rodney Morris. Despite the support that it gained online, only four students attended the meeting.