A family that rhymes together stays together 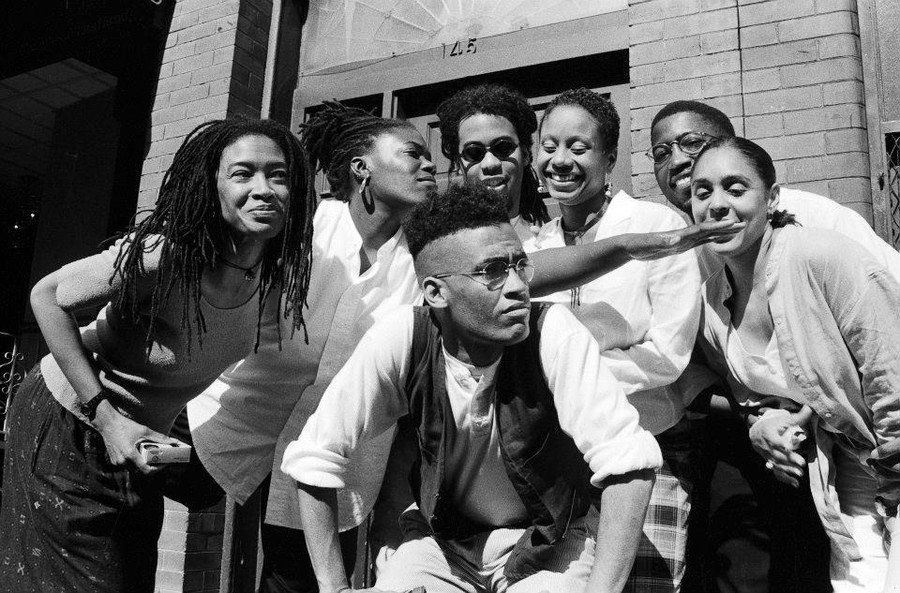 Courtesy of the Poetry Foundation

The Dark Room Collective, a group of African American poets who informed one another’s work and initiated a popular reading series in Cambridge, Massachusetts in the late 1980s and early 1990s, gathered for a reunion reading on Thursday night downtown at the Poetry Foundation. The Collective’s members included prominent poets Thomas Sayers Ellis, Sharan Strange, Natasha Trethewey, and Kevin Young, all of whom read. Towering and heartfelt on its own, the reunion was also an important event for the Poetry Foundation, which is celebrating both National Poetry Month and Poetry magazine’s centennial year.

It was fitting that as the Poetry community gathered to celebrate its own rich history and the tradition of National Poetry Month, the Dark Room Collective, too, had the opportunity to reaffirm its identity and reflect upon its past. This shared history provoked a certain mood, one that resonated with the large audience who turned up to the event. Everyone—poets, couples, and friends—relaxed into the experience, teasing and sharing as if with family.

“Thomas Sayers Ellis, one of the Collective co-founders, approached the Foundation in June 2011 to propose the reunion,” wrote program director Stephen Young in an e-mail. “All of the members of the Collective will be doing tonight what they hope will be the first in a year of reunion readings. The Collective hasn't read together since 1996, and each has gone on to have an amazing career, so it's a treat to see them together again.”

The Collective’s poems, when heard as a body of work, are astounding. These are real-deal poets, who balance a sense of rich connection to their roots with an elegant, modern sensibility. Several poets did tributes to Chicago, like Kevin Young, who read an “Ode to the Midwest”: “I want to be doused/ in cheese/ & fried. I want/ to wander/ the aisles, my heart's/ supermarket stocked high/ as cholesterol.” Other of the poets read poems about different places, Boston or Providence, which were not as pertinent to the Poetry Foundation’s hometown, but still revealed an important theme of the Collective’s work: the tension between personal identity and experience.

Some Collective members focused more on sensuality and love, like John Keene, who read about a lover “raining down another round of kisses.” Natasha Trethewey read a long poem about colonial Mexican casta paintings that depicted the mixed-race children of Spaniards and natives, and a poem about familial love, in which she and her white father toured Thomas Jefferson’s estate.

“The worst thing about reunions is how old they make you feel,” Trethewey joked before her reading.

Nehassaiu deGannes, a poet-turned-actress, spoke about being a young poet, saying that the collective saved her from “loneliness, innocence, and ignorance,” and compared joining the Collective to “getting on a train that led me other places.” One of her poems, written for her brother, ended: “When he is smoke, where will he go?”

“I don’t think I ever got an education as thorough and as remarkable as when I was with them,” John Keene said of his friends and fellow poets, just before he read.

A sense of history floated about the room. The word itself dotted the poems. There were lines like: “Insert history here.” “Here, history gives itself away.” “History rendering him that blank shade of in-between.”

Place, identity, love, history—there was an undeniable sense that these were people who, through sharing their writing, came to care for one another. In a tender gesture, Sharan Strange, a collective co-founder, looked at each Collective member in the audience and described which poems she would choose to read for him or her, and why.

The event lasted just over two hours, which, by poetry-reading standards, is sort of a marathon. But that probably couldn’t have been helped. Family reunions tend to run long, and you can’t skimp on details when you’re teaching history.