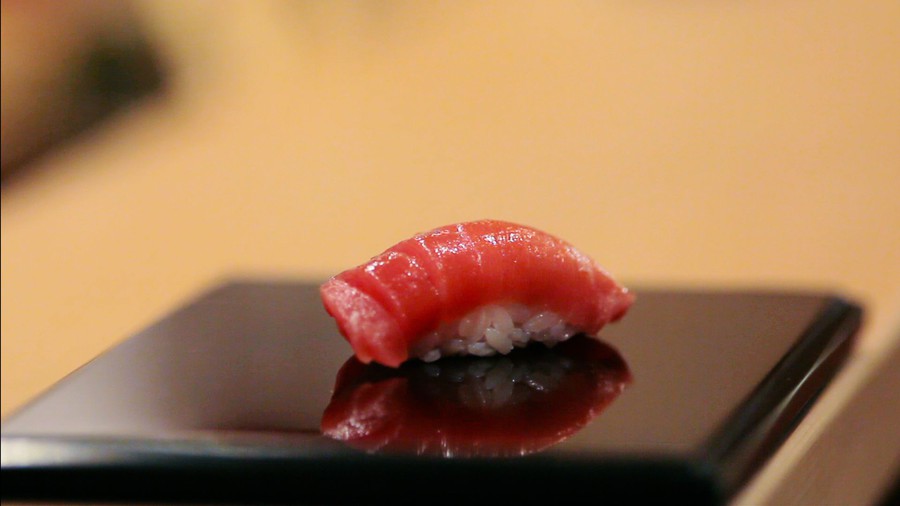 Yet with promises to stop at Belmont’s La Creperie beforehand, my friends and I found ourselves on the Red Line towards the Century Centre Theater—the only place in town screening David Gelb’s Jiro Dreams of Sushi.

The documentary offers a straightforward premise, and sticks to it: Jiro Ono has been making sushi for 70 years, and by now he’s nearly perfected the practice as an art. Jiro’s Tokyo restaurant, Sukiyabashi Jiro, is one of the few restaurants in the world that boasts the ultimate culinary rating of three Michelin stars. Meals start at 30,000 yen (almost $400, according to Google’s current conversion) depending on the available fish, and must be reserved months in advance. The restaurant is comprised of 10 seats at a bar, behind which Jiro serves his customers directly. There aren’t maki rolls at Sukiyabashi Jiro; instead meals consists of 20 pieces of sushi, each a different type of sea creature, all made one at a time. One of the documentary’s simplest pleasures is derived from seeing the stoic Jiro stare intently at his customers as they eat, seemingly oblivious to their discomfort. I guess once you’ve been declared a Living National Treasure by your country for outstanding culinary contributions, you can get away with that type of thing.

Gelb’s approach behind the camera matches the titular chef’s efficiency and consistency, to less desirable effects. There are only so many times he can tightly frame Jiro’s hands as they wed fish and rice before it begins to get tedious. Similarly, we hear that Jiro’s methods behind the counter, coupled with the flavorings of the cuisine he produces, create together a sort of “edible symphony.” This comparison is made too often, and too heavy-handedly, I’d argue—I can recount at least three separate scenes where someone dropped the metaphor while the sounds of Bach or Mozart blared in the background.

Sushi is the star of this movie, undoubtedly, but that alone doesn’t warrant the film’s derivative nature. Rather, it’s Gelb’s refusal to take his camera past the walls of Jiro’s kitchen (or any place which might make the Japanese legend a little uncomfortable). For instance, the movie highlights the lives of Jiro’s high-achieving sons. The eldest, Yoshikazu, age 50, is still working under his father, waiting patiently for the day when Sukiyabashi Jiro becomes his. We hear that Jiro dissuaded him from attending college in favor of taking over the family business. We never hear of a wife, nor of any romantic inclinations. When asked if he’s sad about having to spend so much of his life working under his father, Yoshikazu responds simply that as the eldest, it’s what’s expected of him. He never responds to the idea posed by several other people we meet in the film that to even match the respect Jiro has garnered, Yoshikazu will have to make sushi at least twice as well.

Later in the film we find out that it was Yoshikazu, not Jiro, who served the Michelin Board during all its visits, and that ultimately he is responsible for Sukiyabashi Jiro’s three stars. It’s a subtle placation for the Americans like me who find hard to swallow the traditional Japanese mores we see at play here. If Yoshikazu isn’t to question his fate, why should I? Similarly, Jiro speaks at length about his perceptions of time and work. It takes at least 10 years for any of his apprentices to even be allowed to cook an egg in his restaurant, and after 70 years of crafting sushi, he believes he still hasn’t reached perfection. Work requires total commitment and the total self, offers Jiro. Kicked out of his house at the age of nine with a warning from his parents not to return, it’s easy to see the circumstances that crafted these beliefs. A few of his other notions might be a little more off-putting for some viewers, such as his habit of making pieces of sushi smaller for women than for men in accordance with their “smaller appetites.”

Caution also to those who get squeamish in manners regarding the killing of animals; at least a quarter of the film is spent in Japanese fish markets, replete with giant dead tuna and squirming shrimp. I myself felt a little uncomfortable watching a man pry a live octopus off his hand and into a dry plastic bag. But there’s just as much art in the preparation of sushi as in the result, and Gelb dedicates plenty of screen time to Jiro and company’s precise slicing and dicing. Placation comes in the form of a brief interlude about the dangers of overfishing, but somehow it’s less effective following a scene wherein a man picks through dozens of toddler-sized tuna before writing them all off as not worth his money.

Ultimately, Jiro Dreams of Sushi is, if unquestioned, a beautifully-shot documentary which celebrates the dual art of food and dedication. It’s a savory window into the life of a man who is from a time and place entirely alien to the average American; a man who has dedicated himself to his craft, and by everyone’s standards but his own, has perfected it.