Death Cab gives you a reason to stay

Death Cab for Cutie puts on a good show at the Chicago Theatre. 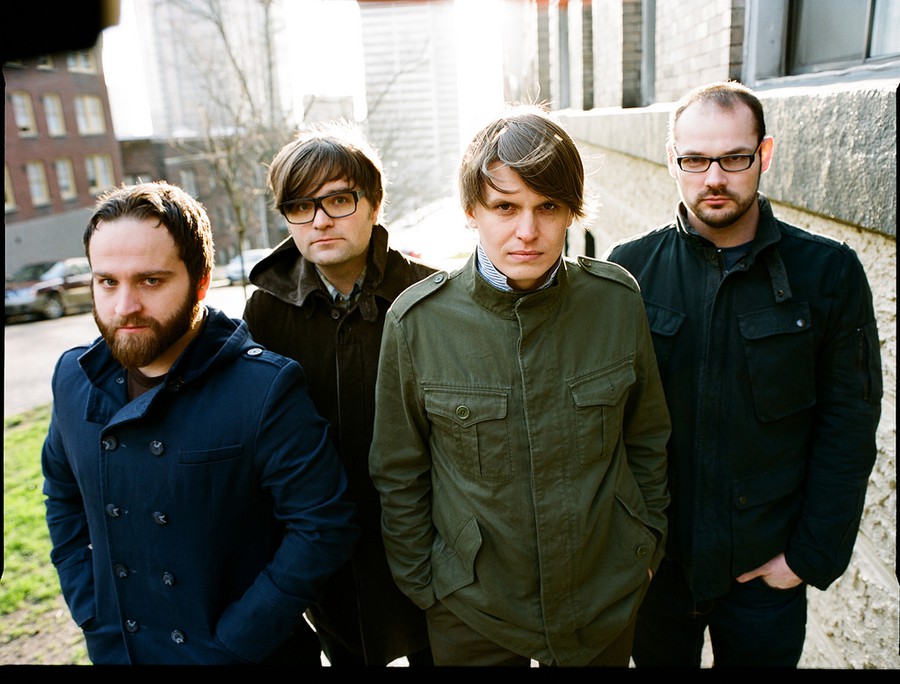 Last Monday night, Death Cab for Cutie took over the Chicago Theatre for part one of their two-day stint in our fair city. The show sold out, but the filled seats didn’t prevent the relatively chill audience from enjoying the sensory details (even though the Chicago Theatre’s acoustics are such that artists can actually hear what people yell, if you’re into that kind of thing). Even on a weeknight with a 9 a.m. discussion section the next morning, the experience definitely merited the time and reasonable ticket price.

The night’s musical stylings began with an opening set by the band Low. Without knowing anything about the band before hearing them live, their sound could be quickly categorized as both distinctive and complementary to DCFC. Somehow the slow ballads called to mind a road-trip video montage, an indie film soundtrack, or some combination of the two. That or a really high-quality prom band backing up a gym floor of slow-dancing couples. Although it wasn’t a particularly electrifying introduction to the band, they performed well and were intriguing enough to look back into for that summer road-trip playlist you may or may not be making as you “study.”

After WXRT Radio’s requisite introduction and pumping up of the crowd, we got our first taste of the DCFC and Magik*Magik Orchestra collaboration with a Ben Gibbard & Orchestra rendition of “Passenger Seat” that transitioned into a full DCFC & Orchestra version of “Different Names for the Same Thing.” And it was good. Thankfully, the friend I attended with had given me a crash course on DCFC discography (beyond the approximately three songs I had known before buying a ticket), so I had a moderate idea of what was happening. Had that not been the case, though, the music definitely sounded beautiful enough that sitting there and basking in the gloriousness of Ben’s voice would have been sufficiently satisfying. In fact, Death Cab for Cutie may have achieved one of the closest approximations to album-quality audio that can be found in a live performance, which is always refreshing to find at a concert.

Aside from that lovely revelation, there were still many other highlights worth noting. For instance, Magik*Magik Orchestra’s presence meant that we had Death Cab for Cutie awesomeness plus harmonizing strings. This was an exponential improvement over already great music. Ben Gibbard’s little microphone dance wasn’t exactly an integral part of the concert, but watching him shuffle in place throughout most of his singing was just adorable. Also, a special shout-out to Nick Harmer, Death Cab’s bass player, for just playing extremely well. My personal favorite moment, though, came when the music was so calming that I was about to nod off. And then I snapped to attention because they were playing “Soul Meets Body” and throwing a light show of flowers across the ceiling. Always a good thing to wake up to.

Like most things in life, there were points during the concert that fell somewhere in between happy and sad. “I Will Follow You Into the Dark” consisted solely of Ben, an acoustic guitar, and some strategically placed violin accompaniment. Absolutely gorgeous, but also tragic. Speaking of which…so much possible emotion. It’s probably a safe bet that most of the audience had a great time and didn’t sit there sobbing quietly, but it was the kind of situation where people could easily have been a few sad memories away from bawling.

Although it took my friend pointing it out for me to notice, a semi-downside of the concert was Death Cab’s lack of major audience interaction. They were relatively responsive to the things people yelled during quieter moments, and what they did say was amusingly witty, but they remained quiet for the most part. But as long as you didn’t go with the intention of starting a philosophical discussion/making Ben forget all about Zooey Deschanel, it didn’t create a big problem. There was also a noted absence of “I Will Possess Your Heart.” Clearly the band couldn’t play through their entire works, but if they were taking requests, that would’ve been a nice inclusion.

That being said, the experience was both relaxing and fun as a T-shirt-and-jeans kind of night with an amazing soundtrack and a charming light show. If they come back to the area before your graduation date and you’re into excellent indie rock, definitely find your way to one of their shows. Because now that I’ve heard them one time, I need them so much closer.