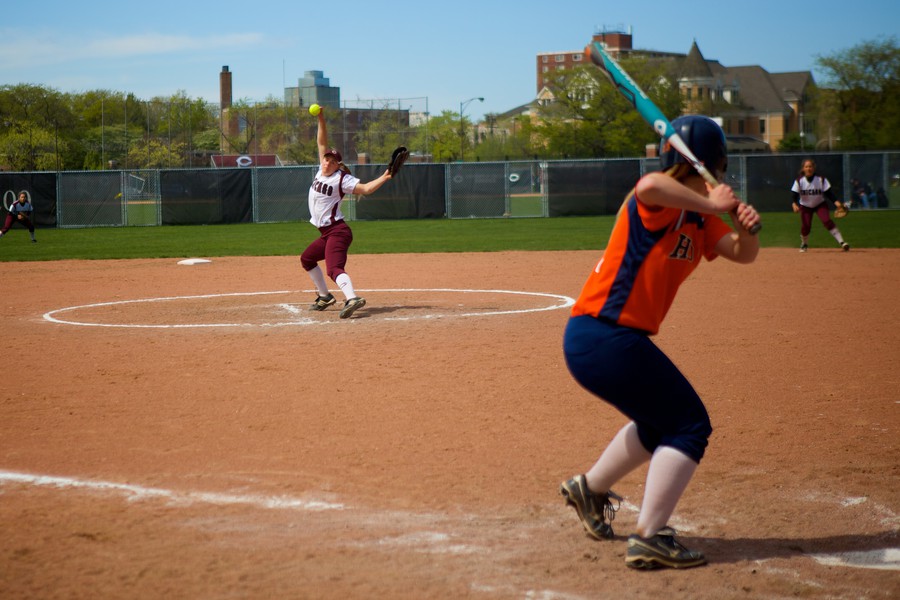 The Maroons got notches 19 and 20 on their regular season belt on Saturday, taking both games from Hope in a doubleheader at Stagg Field.

Chicago (20–8) blew out the Flying Dutch 9–3 in the first game, taking an early lead that they never relinquished. In the nightcap, the Maroons scored the game’s only run in the fourth inning as Kim Cygan shut Hope out in a 1–0 victory.

“We are definitely pleased with 2 Ws,” head coach Ruth Kmak said. “This time of year, it doesn’t matter how pretty the game or score is, as a team, we just want to end up with a W.”

Even as the focus was on winning, and not any kind of moral victories, the South Siders managed to hit milestones and prepare themselves for future play.

In particular, second-year Kaitlyn Carpenter broke the school records for triples in a season, tying the old mark of six in the sixth inning of the first game, and setting the new record of seven with a crucial triple in the second game that set Carpenter up to score the game’s only run.

Referring to Carpenter’s record as a “fantastic accomplishment,” Kmak described what she wants from her team in their upcoming games.

“At this time of year, we are trying to win games,” Kmak said, “while also putting the components in place for a potential post-season berth.” She named particulars, like getting all of the team’s pitchers and hitters into game situations and bringing injured players back into the fold.

Chicago’s offense shined in the first game; after getting a two-run shot past the fences from fourth-year Liz Payonk (her fourth of the year), the Maroons stacked five of their 12 hits together into a five-run fourth inning. Fourth-year Sarah Neuhaus (7-4) picked up the win for five innings of three-run ball, and first-year Tabbatha Bohac polished the game off with two innings of three-up, three-down pitching.

Hope’s offense seemed the bigger threat in the second game, getting a runner on base in six of their seven innings at-bat. Strong defense behind Cygan, though, helped keep runners out of scoring position. The Maroons had three hits and no walks compared to the Flying Dutch’s two hits and five walks, but a sacrifice fly by fourth-year Julia Schneider in the fourth brought Carpenter home to deal Hope’s Olivia Vacik (5–7) the loss as Cygan hurled her third shutout of the year.

With the pair of wins, Chicago reaches 20 wins for the third straight year, and the ninth in Kmak’s 13 seasons as head coach. The benchmark doesn’t mean the team can count their campaign as successful just yet, though.

“A successful season for us on the field is competing in the NCAA Tournament,” Kmak said, adding that the Maroons will need more than 20 wins to reach that goal.

The Maroons will go for wins 21 and 22 against Aurora (20–12) in a doubleheader at Stagg, where the home side has only lost twice in eight games.

The Spartans are led by the bat of catcher Tristan Wilcox, who has an on-base percentage of .483, and the arm of freshman Natalie Zanella (11–8), who has an earned-run average of 1.42 on the year.