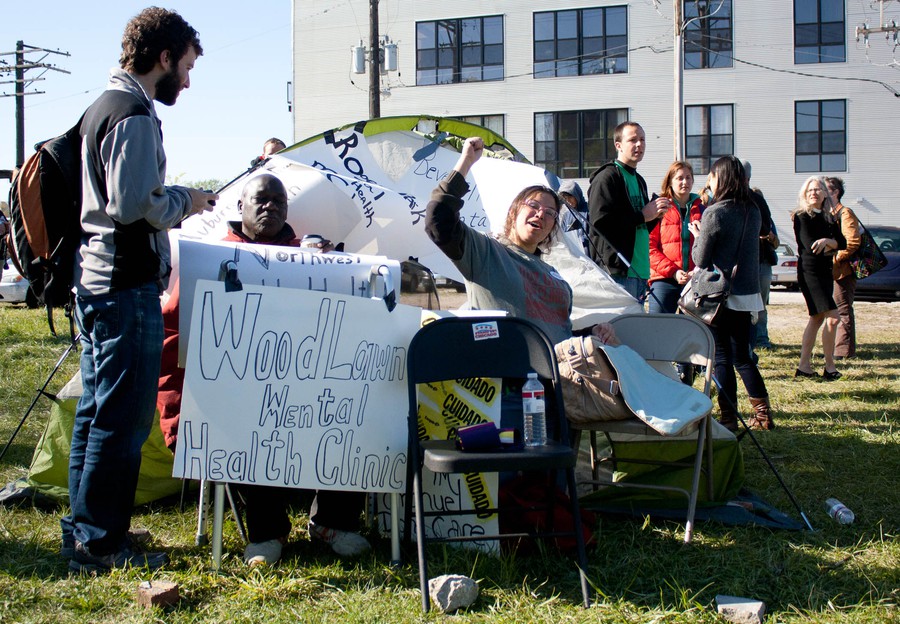 More than 10 days after activists were first arrested for seizing the Woodlawn Mental Health Clinic in protest of its impending closure, student and community activists assembled alongside local churches on the sidewalk of East 63rd Street yesterday for “Ministry Monday.”

Later that evening, 12 additional protesters were arrested, bringing the total count to 37. Several undergraduates were included in the arrests.

Five religious leaders and their congregations joined the demonstration, which began around 3 p.m. with speeches by patients and organizers. Rev. Reggie Weaver of Woodlawn’s First Presbyterian Church concluded the day’s events with a sundown prayer service.

Civil rights and political figure Rev. Jesse Jackson was scheduled to lead the prayer meeting but could not attend for unspecified reasons.

Leading the gathered congregants and demonstrators in prayer, Weaver gave thanks “especially for the stamina, the courage, the conviction, and the will of all the young men and women who have gathered this day and the past several weeks, standing up for the rights of equality of health care. We pray that their actions will not be in vain.”

In addition to giving his support for the prolonged demonstrations, which began April 12, Pastor Anthony Williams of the Good Shepherd Evangelical Lutheran Church in the southern suburb of Robbins, IL, asserted the right of activists to camp out on the vacant lot in front of the clinic without fear of arrests. The lot, according to Williams, is legally the tax-exempt property of the church he used to lead, New Revelation Lutheran Church.

Williams said the closing of six of Chicago’s 12 mental health clinics, including the clinic on East 63rd Street and South Woodlawn Avenue, is “a violent act” and the denial of access to health care is “a violation of human rights.”

“The whole world is my parish. This is what I do, ministry, so I came out here to support what is a righteous and just cause,” Williams said.

In addition to clergy support, activists affiliated with Occupy Chicago and RSOs UChicago Occupy, Southside Solidarity Network, and Students for Health Equity were in attendance.

“Ultimately, it’s not about this clinic or all six clinics. It’s not about the 18 people already hospitalized or the people getting ready to be hospitalized or arrested. It is about our choices, our future, our stories. It’s about having brave conversations about what we stand for,” fourth-year protester Sophia Kortchmar said.

The April 12 action which kicked off the demonstrations saw protesters barricading themselves inside the clinic, until 23 were arrested in the early hours of April 13. Advocates held a health fair that weekend and two more were arrested April 17.