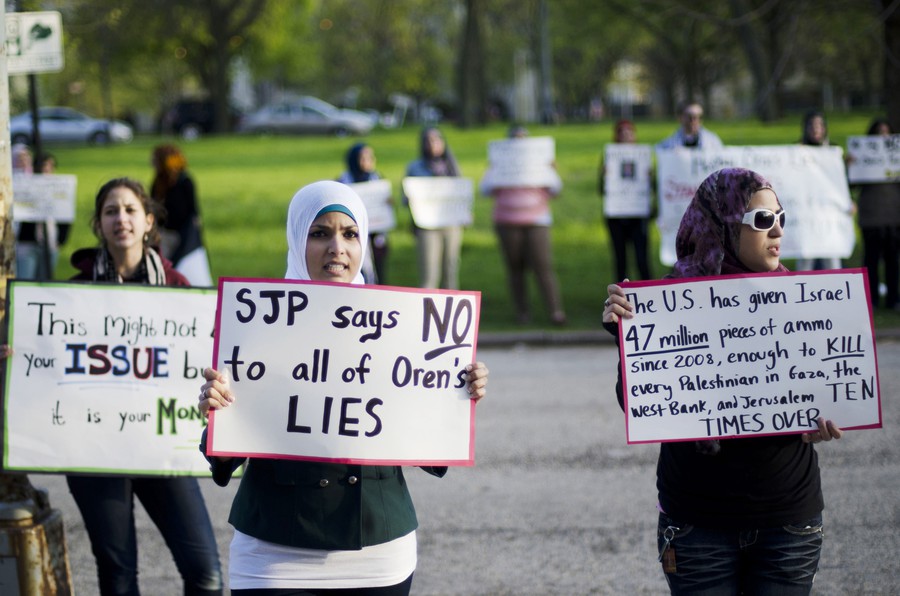 Michael Oren, Israeli ambassador to the United States, underscored the threat posed by a nuclear-armed Iran and dispelled notions of a diplomatic rift between Israel and the U.S. at a talk yesterday evening at International House.

Members of the RSO Students for Justice in Palestine (SJP) picketed outside the lecture, which focused on Iran and the Israeli-Palestinian settlement conflict, but also dwelled on the issue of Israel’s standing around the world and its historical relations with the U.S.

And yet, Oren said, “Nobody wants to take military action against Iran.”

Oren also laid out the delicacy of Israel’s settlement disputes in Biblical terms.

“It is nearly impossible for the Jewish state to be able to tell a Jew that he or she cannot live in his or her ancestral homeland,” he said.

However, Oren indicated that Israel has made sacrifices in the interest of peace and argued that the Palestinian government shares most of the blame in stalling the peace process.

“Now, the impediment is the unwillingness of Palestinian leadership to sit down and discuss a two-state solution,” he said.

Oren, Israeli ambassador since 2009 and historian of the Middle East, offered a long-view account of the relationship between Israel and America, beginning with the pilgrims, who, according to Oren, viewed themselves as the “new Israelites.” Oren claimed that a Biblical narrative is ingrained in American society, and that American democratic values are ingrained in Israeli society.

Commercial ties have also emerged in the past 20 years, further connecting the two countries. According to Oren, Israel is now America’s twentieth largest export destination.

Fourth-year David Akinin was relieved to see civility during the lecture, considering the protests that interrupted former Israeli Prime Minister Ehud Olmert’s lecture at the University in 2009.

“I was looking to see a change in our campus, as [Olmert’s] reception was disappointing and embarrassing,” Akinin said. “It was wonderful to be able to hear [Oren] bring historical perspective, connecting American history and the achievements of the state of Israel.”

The talk’s moderator, professor of Near Eastern history Fred Donner, read questions submitted from the audience at the end, including one which expressed concern about challenges to the legitimacy of Israel as a nation.

“We have to take the de-legitimization issue seriously. We view it not as a PR problem, but as a strategic threat,” Oren said in response.

Third-year Sami Kishawi, a protester involved with SJP, stated that the group was not protesting Israel’s right to exist.

“Nothing here is anti-Semitic. I believe in a solution that’s equal to all sides,” he said. However, she said, “The principles of truth and justice should not be applied selectively.”