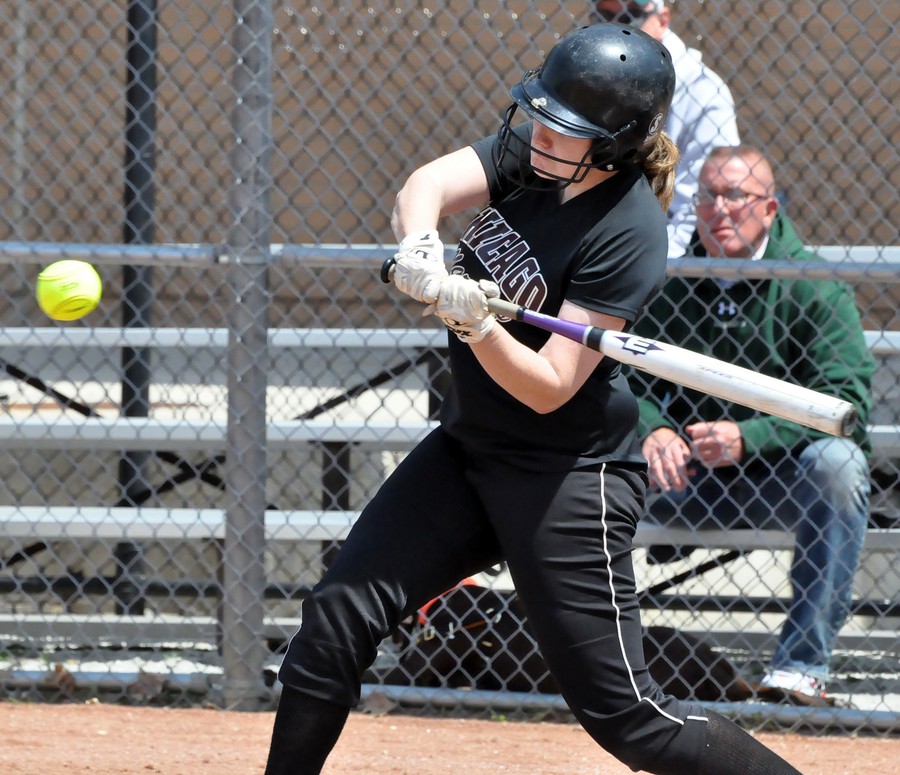 The Maroons took three of four games this past weekend, beating Wheaton (15–6), Calvin (5–10), and Illinois Wesleyan (12–3) by three, eight, and one run, respectively, to their opponents’ nil before losing 6–2 to Illinois Wesleyan in the nightcap of their Sunday doubleheader.

Third-year Kim Cygan (8–1) threw complete-game shutouts against Wheaton and Illinois-Wesleyan before pitching three scoreless frames in the second game against Illinois-Wesleyan to extend her scoreless innings streak to 19.0. Fourth-year Sarah Neuhaus (4–3) and first-year Emily Ashbridge (0–1) combined to blank Calvin in a four-hitter.

“Our pitching was solid throughout the four games,” head coach Ruth Kmak said. “Our pitching will keep us in games, but we need our offense to step up, execute, and finish in these close games against quality opponents.”

In Saturday’s Wheaton Invitational, in which Cygan won the MVP award, the Maroons racked up hits and plated runs with ease. Against Calvin, Chicago strung together four straight two-out hits in the third inning, scoring four. Second-year Kaitlyn Carpenter, who extended her hitting streak to seven games over the weekend, led with a triple and scored on second-year Julia Covello’s RBI single. First-year Raechel Cloud reached base with a single, then fourth-year Liz Payonk punctuated the inning with a three-run homer—her team-high third on the year.

“I have been to trying to take my coaches’ advice about taking every at-bat as a new opportunity and not to dwell on a previous at-bat,” Carpenter said. “I also think that I’ve been getting lucky; some of the ways I get on base are ridiculous and probably shouldn’t happen.”

The outfielder, hitting a team-high .485 on the season, was also central to Chicago’s emphasis on being aggressive on the base paths; they got four stolen bases over the weekend, three of them from Carpenter, and worked to get extra bases on a bevy of sacrifice hits and doubles.

“Overall, we have seen a marked improvement in our base-running this season,” Kmak said. “We are more aggressive overall and are putting the opposing defense in position to have to make difficult plays…we are willing to intelligently take risks.”

Against Wheaton, the Maroons scored two quick runs in the second, including one by the pitcher, Cygan. They cruised the rest of the way behind Cygan, who only allowed three hits with no walks to lower her ERA to 0.73 after weekend action.

Illinois-Wesleyan proved a greater challenge for the Maroons on Sunday afternoon. The first game—in which second-year Maddie McManus scored the game’s only run to give Chicago the lead in the second inning—saw twelve runners left on base by the Maroons, and nine by the Titans. Chicago scored only the second run of the year off of the Titans’ Molly McCready, but they could have had more; eight of the stranded Maroons were primed in scoring position.

“We need to take better advantage of those opportunities against quality teams,” Kmak said.

The second game saw Illinois-Wesleyan put up two runs in each of the first three innings. The Maroons scored a run in the third and another in the sixth, but could not muster a rally as the Titans’ Victoria Whitaker and Jessica Toth spread out Chicago’s eight baserunners over several innings.

“Splitting is always a bummer,” Carpenter said. “The games were a learning experience, and we know our weaknesses. We just need to work on the small things now.”

The Maroons play next on Friday at Lawrence and on Saturday at UW–Oshkosh in a pair of doubleheaders.