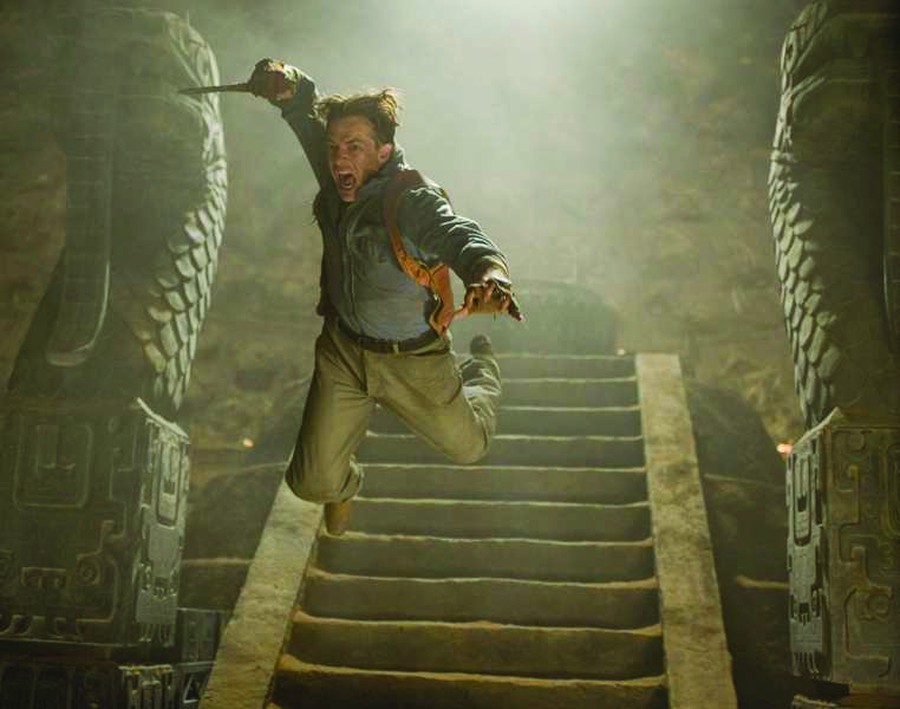 Haven’t seen The Hunger Games? You’re the only one: In only two weeks, the dystopian action flick has racked up an unbelievable international gross of about $380 million. Among the many records Katniss’s arrow has broken, these are some of the most impressive. The Hunger Games boasts the second highest non-sequel opening week and weekend debut (only behind The Dark Knight), the highest non-sequel single day opening, and the top opening weekend in March, ever.

Katniss has no idea of the effect she can have: Before she was pissing off the Capitol with a fistful of nightlock, Jennifer Lawrence was all done up in blue scales for last year’s X-Men: First Class. It ended up being such an unexpected hit that a sequel is in the works, scheduled to start shooting this fall. There’s a problem, though: Catching Fire, the next Hunger Games movie, is set to film this summer and fall, as well. Fox’s deal with Lawrence would trump Lionsgate’s, meaning it could be a while before audiences get to see Katniss Everdeen on the silver screen again, despite the fact that a November 2013 release date has already been set.

Super Overkill: Tired of superhero movies? Well, then I’ve only got bad news for you. In addition to this summer’s The Avengers and The Amazing Spiderman, as well as the still untitled X-Men: First Class sequel, Kick-Ass 2: Balls to the Wall is set to film this summer and Man of Steel, Zack Snyder’s Superman reboot, is in post-production for a release next June. Also coming up next year? Thor 2, The Wolverine, and Iron Man 3. Meanwhile, Green Lantern 2, Captain America 2, and a Daredevil reboot are all in the works for 2014.

Reboots are (Un)Dead: Jon Spaihts, screenwriter of this summer’s Alien prequel, Prometheus, has just been hired by Universal to write a reboot of the ‘99’s The Mummy. Little known fact: the original was actually nominated for an Oscar (Best Sound).

Reign of Meyer Continues: Her vampires may have lived for centuries, but it seems like this womanhas been hanging around for millennia. Stephenie Meyer, best known as the scribe behind the Twilight novels, won’t be fading away with the release of Breaking Dawn: Part Two this November, despite it being the series’s last film. A trailer for The Host, Meyer’s first sci-fi novel, just dropped, touting a newly-brunette Saoirse Ronan as lead and a March 2013 release date. Ronan has also been pegged for the lead in another adaptation of a young adult novel, Meg Rosoff’s How I Live Now.

Bullied into Submission: After a long and highly publicized battle with the MPAA, the controversial film Bully has an official rating: PG-13. First slapped with an ‘R’ for language (extensive f-bombs), Bully was to be originally released as ‘Unrated,’ which could’ve limited the amount of theaters in which it played. The Weinstein Company finally struck a deal with the MPAA and edited the film, but not without guaranteeing it could keep one particularly traumatic scene in full.

Gordon-Levitt Unchained: Joseph Gordon-Levitt has officially dropped out of Tarantino’s next film, Django Unchained, due to scheduling conflicts with his own directorial debut. Jamie Foxx stars as the titular Django, an escaped slave who, with the help of a bounty hunter (Christoph Waltz), sets out to save his wife from a “brutal Mississippi plantation owner,” played by Leonardo DiCaprio. Little is known about Gordon-Levitt’s film, Don Jon’s Addiction, except that currently he, Scarlett Johansson, and Julianne Moore are all set to star.

Things No One Wants: And to end the column on an off note, Taylor Lautner, whose naked torso you might recognize from the Twilight saga, is in talks to star in Grown Ups 2, the sequel to Adam Sandler’s moderately successful 2010 comedy. The original cast and director are also on board for the sequel, as is Oliver Cooper of last month’s Project X. One can only hope that the film goes better than Sandler’s mega-flop Jack and Jill, which swept the 2011 Razzie’s.