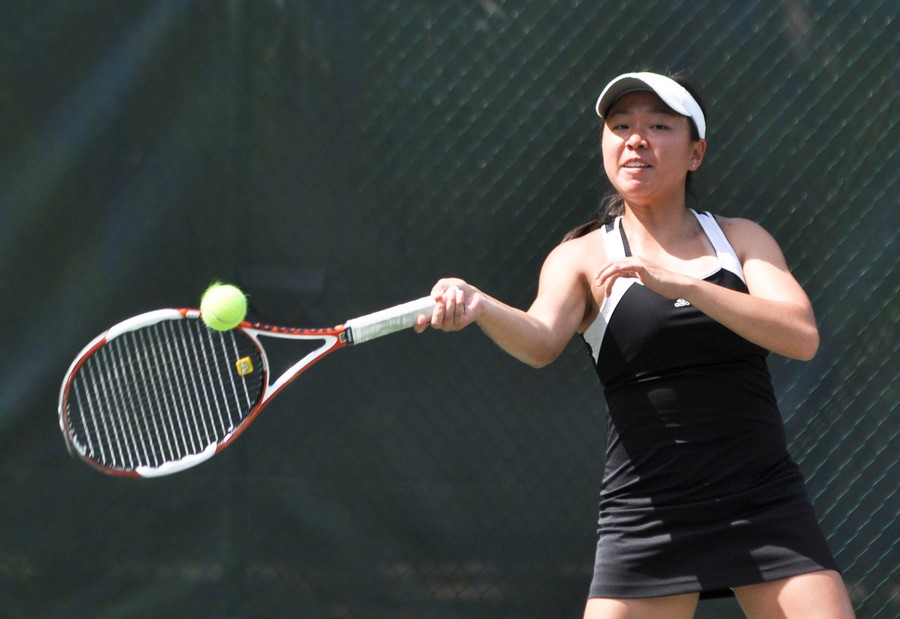 The Maroons brought home the UAA Championship title this weekend for the second time in three years. For the third straight year, the Maroons battled Emory in the UAA Championship: they beat the Eagles in 2010 and fell to them in the 2011 final. With the UAA title, Chicago has also earned an automatic berth to the 2012 NCAA DIII Women’s Tennis Championship.

“Throughout the tournament, everyone on the team improved each match and played with a lot of heart,” fourth-year co-captain Kendra Higgins said. “Our goal going into this tournament was to focus on winning all the doubles matches to have us start with a lead of 3–0 going into singles, and we succeeded in doing so each match.”

Because of their seeding, Chicago had a more difficult path to the finals than the other ranked UAA squads.

“We knew we would have a tough draw compared to other teams such as Emory and Carnegie Mellon because they were seeded higher,” Higgins said, “and we knew that our conference was tough to win because it has four of the top 10 ranked teams in the nation.”

The tournament got underway with the South Siders set to face Rochester in the first round. The Yellowjackets were no match for the Maroons, as Chicago enjoyed a 9–0 victory. Next on the chopping block was fourth-ranked Carnegie Mellon, who didn’t fare much better against the Maroons, going down 8–1.

After two comfortable victories, the Maroons advanced to the finals against second-ranked Emory. The final was a much harder fought affair, but the Maroons came out victorious 5–4. Doubles play proved to be crucial for Chicago, as it swept the Eagles. Fourth-years Higgins and Carmen VacaGuzman defeated their opponents 9–7, fourth-year Jennifer Kung and third-year Linden Li won with a score of 8–5, and the first-year duo of Kelsey McGillis and Megan Tang finished off doubles play with an 8–2 decision.

But the Eagles were not ready to go down without a fight.

Emory dominated its singles matches, taking four of five. Tang secured the only singles win until the third slot match, as the Eagles looked to stage a comeback; Tang won in two sets, 6–2 and 6–4, at the number five slot.

However, Higgins, Kung, Li, and McGillis all lost to their singles opponents.

Tied 4–4, the Maroons turned to VacaGuzman, and she did not disappoint.

Zahra Dawson of Emory won the first match 4–6 and lost the second 6–3 to VacaGuzman. Coming off of a strong second set, VacaGuzman continued to dominate and won the remaining set, putting the Maroons on top 5–4 and earning the UAA title for Chicago.

“The Emory girls were fighters and came back with four wins in singles,” Tang said. “It came down to our No. 3 singles, with Carmen [VacaGuzman] winning the second set after losing the first. She was always ahead in the third set, so that was crucial. We were all nervous watching her, but we knew that she would win in the end.”

“We’re really proud of what we accomplished this weekend at UAAs,” Kung said. “This victory was even sweeter because we were the only ones who believed we could win the tournament and because we compete in one of the strongest conferences in the country.”

One reason the Maroons were able to defeat their higher-ranked competition was their intensive focus on training.

“We were very prepared for the tournament physically and mentally,” Li said, “as we have been working on fitness extensively every day leading up to the UAA Championship.”

The Maroons will look to continue their dominance at the NCAAs this year. The brackets will be announced on May 7, and the tournament will be held in Cary, North Carolina on May 10.