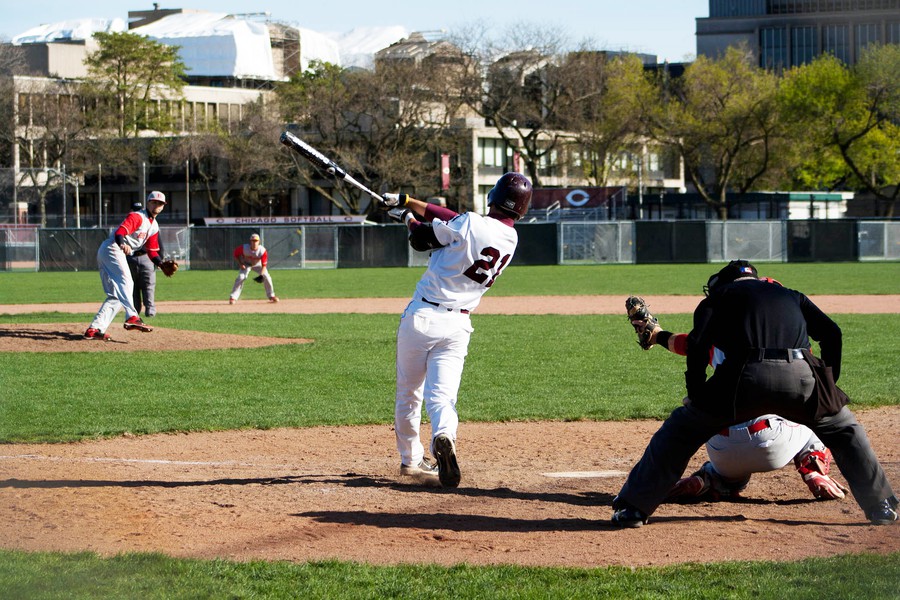 The South Siders had their ‘Eureka!’ moment this weekend. What discovery prompted this cry of joy? As their season wraps up, they seem to have cemented the formula for wins on the road.

The theme of the weekend was superb pitching combined with timely hitting. With these two strengths operating at the same time, Chicago was sure to return home victorious.

“We’ve been playing well lately, and after the wins against Eureka, we’ve put ourselves in a good position to continue playing past the regular season,” first-year infielder Kyle Engel said.

But the season isn’t quite over yet. The Maroons have four games left. However, they are certain to finish with a .500 record, a fact that was not set in stone early in the year. This team has certainly gained strength as they’ve played together more.

Second-year starter Claude Lockhart (6–1) turned in a quality start in the first game for his sixth win, going 6.2 innings while surrendering only an unearned run. He struck out nine Red Devils.

Chicago’s offense took advantage of a weak Eureka pitching staff, amassing 11 hits and eight runs. Their biggest offensive outburst of the game came in the top of the fifth. Though aided by a hit batsman and two wild pitches, the inning certainly belonged to the Maroons’ offense. Second-year first baseman and outfielder Brett Huff provided power for the frame, blasting a three-run home run. It was his second of the season.

“Claude [Lockhart] pitched well, the defense made plays when we needed it to, and we hit well,” third-year infielder J.R. Lopez said.

The same energy carried over into the second game. The pitching was not quite as clean, as second-year starter Alex Garcia went only 3.1 innings. But he only gave up three earned runs, and fell victim to the Maroons’ sometimes-faulty defense, which led to an additional two runs during his time pitching. The bullpen backed him up though, with third-year Matt O’Connor and second-year Chris Warren both finishing off the game without yielding another run.

If the 11 hits and eight runs in the first game seemed like a lot, there probably aren’t words to describe the South Siders’ offensive showing in the second game. Twenty hits led to 16 runs. Every player in the starting lineup, except the pitcher, had at least one hit.

Their two biggest innings were the top of the third and the top of the fifth. In the third, the Maroons’ power streak struck again. This time, the player feeling homer-happy was second-year outfielder Ricky Troncelliti. He blasted his third homer of the season for two runs.

In the fifth, the Maroons scored eight runs on eight hits without any home runs: timely hitting at its best. They also took advantage of two Red Devil errors.

Three members of the team had particularly impressive performances in the second game. Lopez went 4–5, Huff went 4–4, and third-year infielder Steven Schwabe went 4–5. Together, these three accounted for 12 of the Maroons’ 20 hits.

“Our hitting did outstanding. Every hitter up and down the lineup had a good approach at the plate,” Lopez said.

The Maroons play two of their remaining four games this week. This afternoon, they will take on North Central (19–14). The two teams met on April 18 in Naperville, when Chicago won 12–7. On Wednesday, the squad will match up against Rockford (20–14).

First pitch this afternoon is scheduled for 3 p.m. at J. Kyle Anderson Field. The game against Rockford will be in the same place at the same time tomorrow.