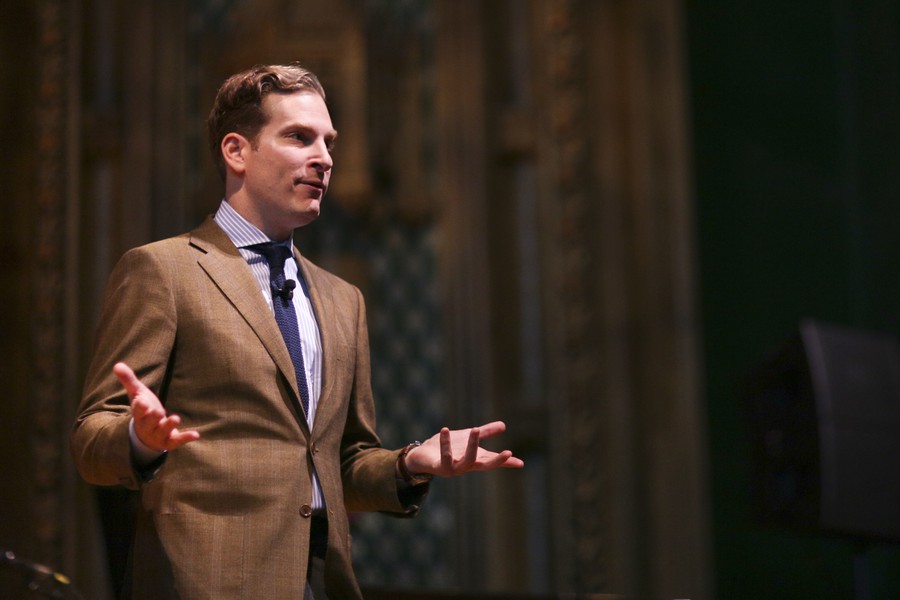 Noah Feldman opened his 18 minutes on stage with an anecdote about the time someone shot at him. He was in Baghdad, accompanied by U.S. occupying forces. Given the conditions, Feldman defended the aggression of his shooters as “justified.”

The Harvard law professor and New York Times Magazine contributing editor broke down the process of revolution, emphasizing the Arab Spring and the question: “How does a revolution become a reality?”

According to Feldman, a revolution has two stages. First, “disrupt the existing order.” The second part “requires putting in place a new, functional order that is meaningfully and significantly different” from the pre-revolution order. The most common way to ensure the second stage of the revolution is to “shape a new constitutional order to memorialize and institutionalize” what had been accomplished through stage one, he said.

Feldman emphasized the necessity of bottom-up approaches to stage two, as top-down impositions often fail as a mechanism to introduce enduring change. Additionally, if only one of the two stages is completed, as observed in U.S. intervention in Iraq, the process either does not qualify as a revolution or only qualifies as a “failed revolution.”

Of the Arab Spring participant countries, Feldman identified Tunisia as the country that had most meaningfully passed through the revolution process.

But he cautioned against optimism in the Arab Spring, saying that many countries have yet to engage citizens in the second stage. It is “much too soon to say that [Arab Spring movements] will succeed,” he said.

Feldman, who studies the juncture between Islam and Western democracy, is a TED veteran. Almost a decade ago, he spoke on the role of politics and religion as technologies to connect and manage people at TED 2003 in Monterey, California.