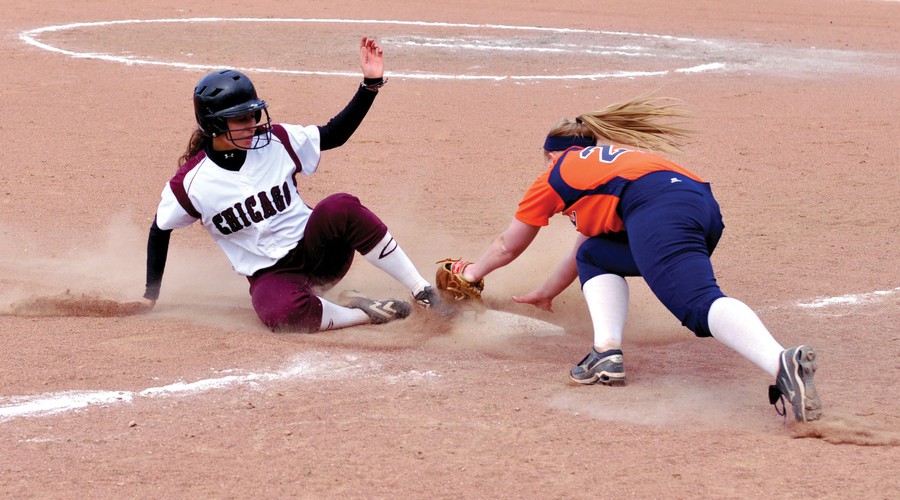 Earlier in the season, the Maroons lost a handful of close games where they out-hit, out-pitched, and out-ran their opponents, only to leave runner after runner stranded in scoring position.

That was then; these are the playoffs. A mostly quiet Chicago (25–9) offense got all the runs they needed Thursday afternoon against John Carroll (30–14) on a second-inning Vicky Tomaka three-run blast. It was the third-year’s first home run of the season, and it couldn’t have come at a more opportune time.

On defense, third-year pitcher Kim Cygan (15–4) led a bend-not-break effort, allowing only two runs even as the Blue Streaks tallied seven hits and three walks. The Maroons stranded eight of John Carroll’s base runners en route to a 3–2 victory.

“We came out a bit nervous and tight,” head coach Ruth Kmak said, “but we battled through.”

In the second inning, Cygan reached on a fielder’s choice and second-year Zoe Oliver-Grey drew a walk to set the stage for Tamaka. She stepped up to the occasion spectacularly, bashing a ball from pitcher Brittany Danilov (22–6) to left-center field. The Maroons have now had ten games with a home run; they’ve won nine of them.

“I saw the change-up coming and I just wanted to drive the ball somewhere,” Tomaka said.

After four innings of stranding at least one runner on base, the Blue Streaks broke through in the fifth inning. In a rare lapse of control, Cygan hurled two wild pitches in the inning. The first allowed John Carroll’s Morgan Robinson to advance to third after she had already stolen second base; the second came after Robinson scored, and allowed another base runner to advance into scoring position. A double from Blue Streaks catcher Mackenzie Griffin brought in their second and final run.

With Chicago clinging to a one run lead, John Carroll mounted the night’s biggest threat, getting Robinson and Griffin on the corners with one out. Showing poise, Cygan deflated the high-pressure moment, inducing an in-field pop up before ending the game by striking a Blue Streaks batter out looking.

Now in the winner’s bracket of the double-elimination tournament, the Maroons square off today against first-seeded Trine (38–8), who triumphed over eighth seed Geneva College 6–5 in a Thursday morning game. The Thunder are making their sixth straight NCAA tournament bid, and were two games away from the DIII World Series in 2011.

“We’re not fearful of Trine,” Kmak said, “but we know we have to play as well as we are capable of playing.”

At Alma, the fourth-seeded Maroons play at 2 p.m. Eastern time. If they continue to win, they’ll play at least one game a day until the regional ends on Sunday.