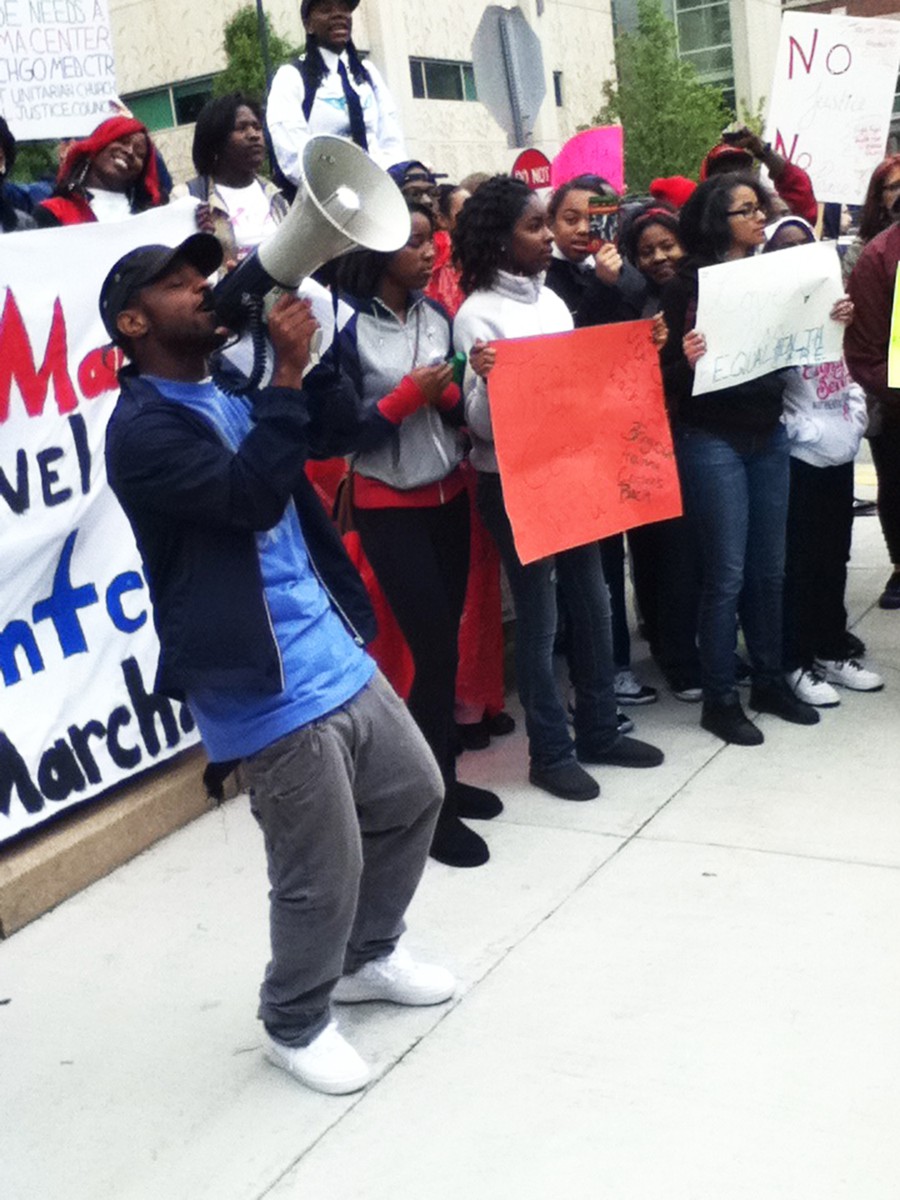 Student and community activists resounded their call for the University of Chicago Medical Center (UCMC) to reopen an adult Level 1 trauma center, marching approximately 10 miles this weekend to emphasize the distance that some South Side victims travel before they can receive trauma care.

As raindrops began to fall on Saturday morning, protesters gathered at the intersection of East 61st Street and South Cottage Grove Avenue and marched to Northwestern Memorial Hospital in the northern downtown area, stopping at several sites along the way to draw attention to the insufficient support they believe South Side residents receive from the city’s health care system.

The starting point of the march was also symbolic. Damian Turner, an 18-year-old activist and one of the founders of the group Fearless Leading by the Youth (FLY), was fatally shot at the same intersection, three blocks away from the UCMC, in August 2010. Turner was pronounced dead 90 minutes later, after riding in an ambulance to Northwestern. Since then, FLY has staged multiple die-ins and demonstrations, including Saturday’s protest.

At a press conference outside the UCMC, the first stop on the march, Evan Lyon, an attending physician at the hospital, said that he knew that next time he went to work, his patients would be a certain subset of people.

“This hospital is not welcoming and is not designed to bring in people who can’t pay,” Lyon said. “I’m afraid that the biggest reason behind not having a trauma center is just the same, that it costs money.”

UCMC officials decided to close its adult Level 1 trauma center in 1988 because it was draining hospital resources and jeopardizing other vital healthcare services, according to a press release on the hospital’s Web site. The hospital continues to operate a pediatric Level 1 trauma center for children 16 and under, the only burn unit on the South Side, a neonatal intensive care unit, and one of the only chopper emergency response systems in the Chicago region, the release said.

An adult Level 1 trauma center requires specific facilities as well as 24-hour staffing from doctors specialized in treating every aspect of a traumatic injury. There are currently four Level 1 adult trauma centers in the city, two on the North Side and two on the West Side.

Lyon said that the hospital already has all of the pieces necessary to open a trauma center.

“There are some of the best neurosurgeons, orthopedic surgeons, emergency room care, general trauma doctors, intensive care units, inside this building,” he said. “All that’s needed is to organize and invest in a trauma center.”

Second-year Michael McCown, who helped start the group Students for Health Equity (SHE) this fall, said that while he understood that organizing a trauma center at the UCMC would be complicated, it would not be impossible.

“For an institution that claims 80 Nobel laureates, how can it be that complicated?” he said, evoking cheers from the crowd. “If you could do it in the ’80s, why can’t you do it now?”

Participants in Sunday’s march ranged from high school students like Yasmine Rayley, 16, who attends Martin Luther King, Jr. College Prep in Kenwood, to Pastor Elizabeth Slaughter, who worked as a medical technician at the UCMC until 1987. The diversity of the protestors, Slaughter said, mirrored those affected by the absence of a trauma center.

“We all have the same common needs,” Slaughter said. “We have a right to receive the same care as anyone. Color, race, nationality, we all get sick.”