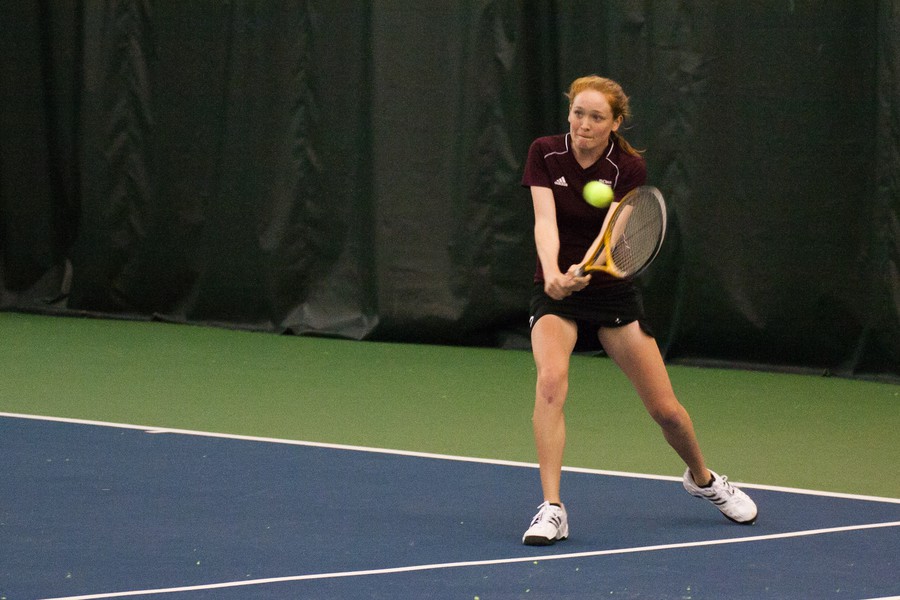 It came as no surprise.

The Maroons cruised into their fourth consecutive NCAA DIII National Tournament quarterfinal appearance with wins over Carleton on Saturday and UW–Whitewater on Sunday at Stagg Field. Chicago will play Johns Hopkins, a team that it beat on March 3 (6–3), on Monday, May 21 in Cary, N.C.

With each doubles team allowing no more than three games in their respective matches, the Maroons came out with a 3–0 lead against Carleton.

On Sunday, Chicago took on a tougher opponent in UW–Whitewater.

At No. 1 doubles the Warhawks held serve to open up the match. In the following game, in spite of three double faults by VacaGuzman, fourth-year Kendra Higgins and VacaGuzman tied the match at 1–1.

“I actually had no clue I double faulted three times the first service game,” VacaGuzman said. “I guess it must have been nerves.”

Each team continued to hold serve to even up the score at 3–3.

The following game determined the course of the rest of the match.

With the Warhawks serving down 30–40 and on the attack, Higgins made a reaching save and lobbed the ball over her Wisconsin opponents. Moments later, the Maroons broke UW–Whitewater.

Chicago did not lose a game after that, winning 8–3.

Perhaps, the one match that seemed over almost as soon as it started was the match that ended up being the toughest: No. 3 doubles.

Tang and first-year Kelsey McGillis stormed to a 4–1 lead which later became a 7–4 advantage.

With McGillis serving for the match, Chicago went up 40–0. Five points later, McGillis and Tang lost the game.

“We definitely lost focus a bit, which is something you cannot do against a team like that, who gets everything back and can feed off your attitude,” McGillis said. “When something like that happens, you just have to shake it off and focus on the next point, which we didn’t do.”

“It’s really all about experience and knowing what to do,” McGillis said. “After being in those types of situations so many times, especially in juniors, it becomes easier to swallow your nerves and just play.”

In the end, it was never a concern that the Maroons were ever going to lose this round of 16 match.

In fact, McGillis, having had shoulder surgery a few years ago, did not want her shoulder to bother her and head coach Taka Bertrand wanted McGillis to keep it as healthy as possible for the next round. Because of that, McGillis served underhand for the day.

“I have served underhand in high school before, and it’s not really a weakness or strength, just really a neutral shot,” McGillis said. “People have trouble getting under it and attacking it. It definitely helps with the shoulder though.”

Higgins and Tang cruised at No. 1 and No. 5 singles respectively to give the Maroons their quarterfinal birth.

Chicago plays Johns Hopkins on Monday, May 21 at a time to be determined in Cary, N.C.