Comics conference explores the brainier side of cartoons 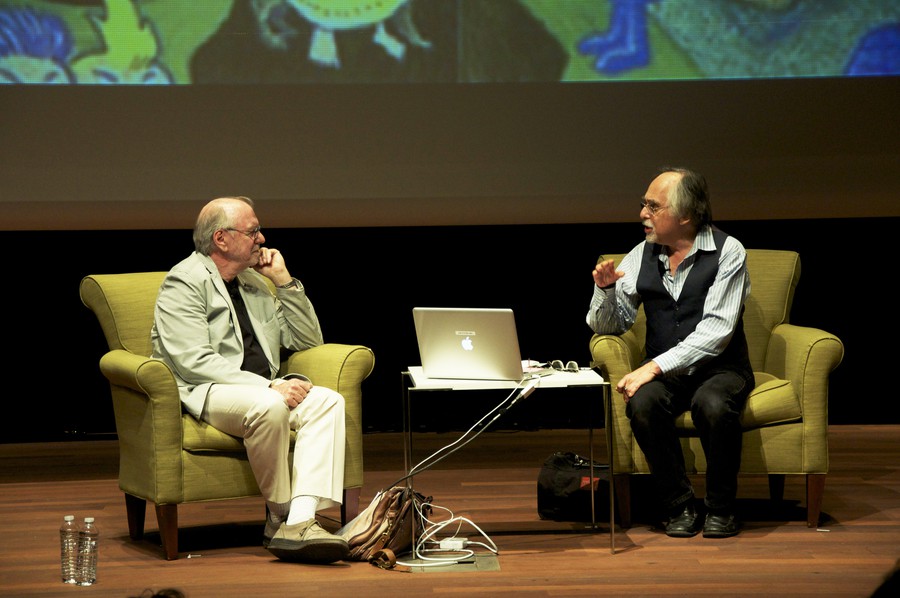 Comic books have always suffered from a kind of personality crisis. Forced to occupy the unfavorably ambiguous space between cartoons and the novel, they have been shrugged off for years as either too childish or too simple to be worthy of any real literary merit. Time, however, has been kind to the industry, which is enjoying new success from fans and literary critics alike. Such favor reached an apogees this past Friday at Comics: Philosophy and Practice, a three-day conference that paid homage to the world of cartoons. The event brought together artists, illustrators, academics, and comic book aficionados from Chicago and elsewhere to give credit to an industry that has, in recent years, enjoyed broad exposure and success. Sponsored by the newly-formed Grey Center for Arts and Inquiry, the conference was designed to address issues pertaining to the history of the industry, its integration into mainstream culture, and the craft’s always-changing future.

Seventeen renowned cartoonists offered workshops, lectures, and panels, all of which took place in and around the magnificent, airy and unfinished auditorium at the Logan Center.

The conference marked the Grey Center’s first public event. While the snazzy venue wowed students and onlookers alike, it was by no means the main attraction. At the end of the weekend, the main talking points were inarguably the conference’s illustrious participants. Industry giants Robert Crumb and Art Spiegelman (just about everyone cited one or the other as an influence) were both in attendance, as well as more recent experimental artists like Chris Ware and Charles Burns. Conference organizers David Levin and Hillary Chute went all out to create the best possible overall experience, a gesture that the audience greatly appreciated.

The conference opened to a packed auditorium on an unexpectedly warm summer’s day. After Levin and Chute delivered brief opening remarks and introductions, the first speaker took the stage. The audience greeted the venerable presence of Art Spiegelman with frenzied clapping, satisfied whoops, and other (regrettably unprintable) histrionics.

Clad in a classic Spiegelman getup (three-piece suit, jacket), he walked to his seat leisurely, taking in his devotees’ rapturous applause. W. J. T. Mitchell, an author, editor, and professor of English and arthHistory, was Spiegelman’s interviewer and discussion partner. The two chatted about the history of the comic medium, charting its development from the days of the newspaper strip and “floppy copies,” to the more substantial graphic novel format, and finally to the electronic comics that readers can follow on a wide variety of media today. The discussion, aptly titled “What the %$#! Happened to Comics?”, succinctly captured a key issue in all mainstream art: the changing of tastes over time. The days of serialized comic books (at one point, the public consumed 15 million comic books a week) on newsstands are history. But the industry is witnessing a revival as more and more people devour graphic novels, works that Spiegelman called “comic books that you can place a bookmark in and reread.” The new popularity of the graphic novel has motivated cartoonists to adapt, reinvent, and keep the comic revival going strong.

They then addressed the graphic novels as a form of art debate. Spiegelman admitted that there was a time when the form was subject to a sort of deal with the devil, where it could either evolve into a respected art form or die out as an irrelevant relic of a forgotten time. Now, comics and graphic novels are used as teaching materials, museum exhibits and inspiration for novels, films, and other forms of art. The situation is no longer dire, and comics exist not only as forms of entertainment, but as relics of a rich past.

The stifling, sticky second day of the conference featured an all-star panel of famed cartoonists Charles Burns, Seth, Chris Ware, and Dan Clowes. They spoke on the subject of form in graphic novel illustration and how in recent years, illustrators have begun to take more risks with their style and presentation. In the past, editorial boundaries required illustrators to stick to stringent methods of procedure and application; this effectively curbed an illustrator’s creative improvisation. This has changed, since editors now give artists more creative liberty. The results speak for themselves. The three cartoonists were humorous, frequently amusing the audience with offhand jokes about everything from Hitler to charming anecdotes about kissing the television during the Peanuts Christmas special.

Day three, in with keeping with the generally sweltering conditions, forced attendees into flip-flops and tanks. But the outside conditions failed to distract attendees from the conference’s final talk by cartoonist Ben Khatchor. Titled "Halftone Printing in the Yiddish Press and Other Objects of Idol Worship," Khatchor’s speech dealt with the connection between the banishment of idols in Jewish art and culture and the workings of the 20th century Jewish printing press. Khatchor, who is the first cartoonist to have received a MacArthur “Genius Grant,” gave a stimulating presentation that explored relevant realities about art and its effect on people’s thoughts, an idea that was much in keeping with the conference as a whole. In the end, the conference was equal parts idea and art, equally appealing to the philosophers and drawers among us. And there’s nothing sketchy about that.