A review of this year's Summer Breeze concert. 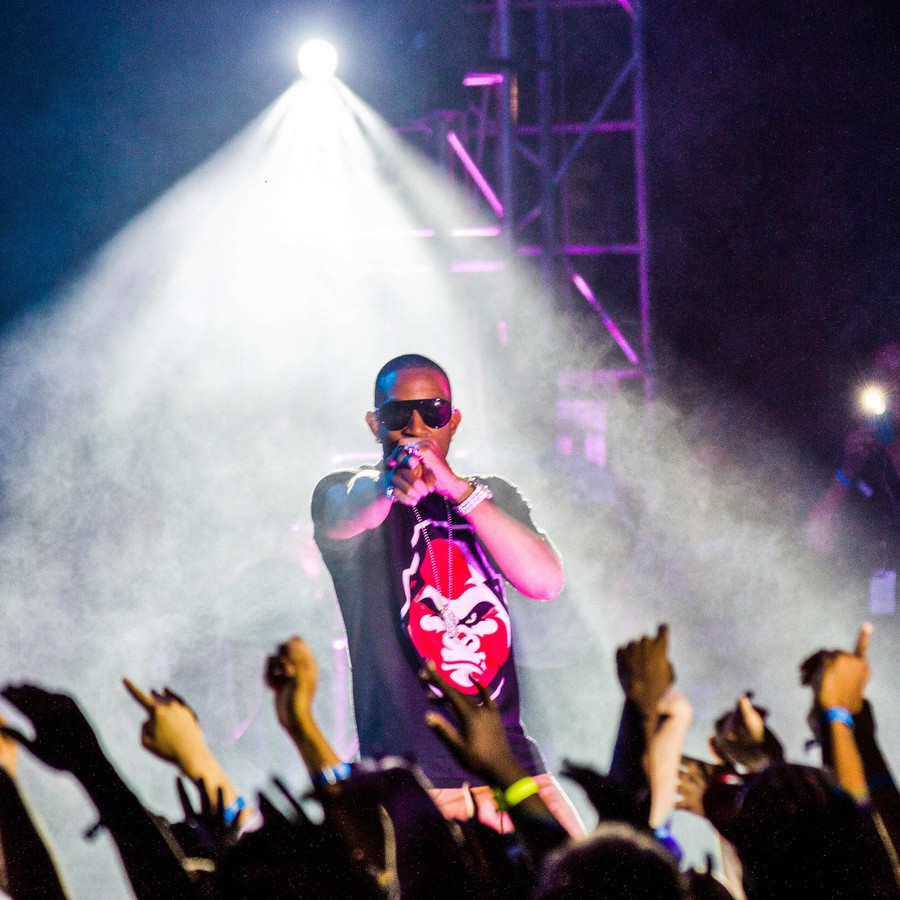 When the Major Activities Board (MAB) announced that the headliner for this year’s Summer Breeze concert would be none other than the rapper Ludacris, people lost their minds. After years of talented but obscure emcees, here at last was a bonafide hitmaker, a rapper famous enough to both draw the ire of requisite fuddy duddy Bill O’Reilly and light up the Billboard charts with club-banging classics like “Stand Up” and “Moneymaker.” That Luda is at least nine years removed from the height of his popularity didn’t matter. He was the soundtrack to many an awkward middle school dance, and everyone knows that the millennial generation is susceptible to huge bouts of nostalgia.

Coupled with indie-cred acts Cults and Neon Indian, this year’s lineup was officially topnotch, so it was hardly surprising that tickets sold out. Hull gate opened at 5, and by 5:10, there was already a solid phalanx of people sitting by the barriers in Hutch Courtyard, trying to preempt the Luda rush. It felt like summer, a stark contrast to last year’s frigid rain that forced the concert indoors. This year, hipsters and frat boys alike were wearing muscle shirts. There was even the pungent whiff of marijuana smoke in the air.

Lead singer Madeline Fillon was awkward in a charming way, bouncing up and down in time with the music, shouting out a perfunctory “Thank you!” at the end of each song, and laughing good-naturedly at the inherent awkwardness of such a move. The bulk of crowd interaction was left to lead guitarist with the rockstar name Brian Oblivion. “This next song goes out to the two kids who have already gone home with alcohol poisoning,” he quipped before playing the straggly opening chords of “Rave On.”

Hazy dream pop is their main gig, but the muffled acoustics did the band no favors. You could only really hear Fillon when she was belting and a bomb joke that might have been related to the actual bomb scare at the 57th Metra early that morning fell flat mainly because no one could understand what Oblivion was saying. Still, people cheered and sang along when Cults played their most famous number, “Go Outside,” and when Oblivion said that “this was the coolest college we’ve ever played, seriously,” he managed to provoke my sympathy in a way that was only surpassed when I later saw him sitting in the grass by the orange barrier fence alone, watching Ludacris.

Neon Indian, the electronic pop brainchild of 23-year-old Alan Palomo, performed next after a long break, playing hits like “Polish Girl” and other songs that honestly began to meld together in my head. Still, it’s definitely easy to see why Palomo has become something of an indie sex symbol. When he came back onstage after the set to help break down, a cabal of front row girls screamed “Alan!” He turned, shook their hands and flashed a beatific smile.

As soon as Neon Indian was done at about 8:30p.m., people began swarming into the courtyard from all corners of the Earth. A security guard had been placed in the Hutch fountain to forbid people from standing in it, but he just upped and left, effectively saying, ‘To Hell with it.” Chaos ensued. One girl headbutted another girl in her quest for front row. At least twice, the push from the crowd was intense enough to make me lose my balance and I skinned my knee in the process. It was nothing too out of the ordinary for a live concert, I suppose, but it was surprising, because hey, it’s the University of Chicago. We’re supposed to be all passive and shit.

It was worth it though, because Ludacris was great. He came out promptly (around 9:10) to the roars of the crowd. It didn’t matter what he said; people were already hyped up, and Luda seemed to know it. He never rapped the entirety of a song, opting instead to entertain the frenzied crowd with fragments of hits (his as well as others) and to pit one side of the audience against the other with the help of his hype man, Lil Fate. (“I think this side has more Ludacris fans than the other. Point your middle fingers at the other side!”)

He did a lot of shout-outs, too. He shouted out to the black people, the Latinas, and the white people (if you were Asian, you were out of luck). He shouted out to the alcoholics and the pot smokers. He even channeled his inner Beyoncé and shouted out to “the independent women who don’t need no man and make their own money.” (This was right after the ho-heavy jam “Areacodes,” so I think it was a strategic move on his part.)

He seemed genuinely surprised that so many UChicago students knew all the words to every song, even “What’s Your Fantasy,” his very first single, "the true test of any Ludacris fan.” When he said that this college had some of the livest Ludacris fans he had seen in a while, I believed him.

Luda pretended he had to finish his set at ten, and then came back for an encore, during which he took requests from the ladies (“My Chick Bad”) and the fellas (“Move Bitch”).

“Luda is officially my favorite live rapper,” opined one student, when the whole thing was over.

Make of that what you will.