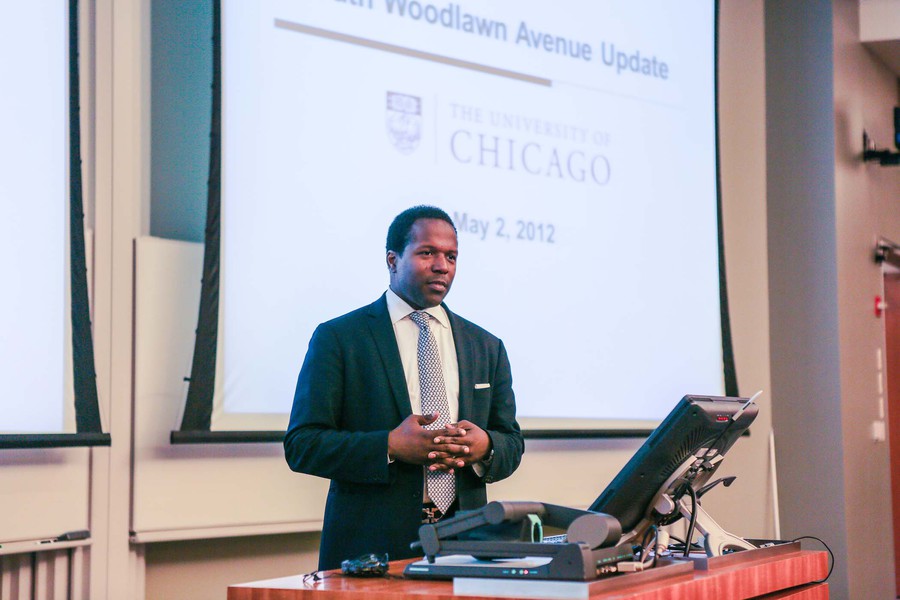 Administrators presented details and timetables for the renovations of three University-owned buildings on South Woodlawn Avenue at a meeting with community members Wednesday evening in a lecture hall in the Booth School of Business.

University officials revealed a timeline for renovating the two single-family homes which will house the Paulson Institute, at 5711 South Woodlawn Avenue, and David Axelrod’s (AB ‘76) Institute of Politics, two doors down, as well as the Seminary Co-op Bookstore’s future home in McGiffert House, at 5751 South Woodlawn Avenue.

All three buildings are encompassed by the University’s Institutional Planned Development 43, an agreement with the city over zoning and land use.

The building housing the Institute of Politics will get a new roof, an enclosed stairwell leading outside, and a wheelchair-accessible ramp that will connect with the Paulson Institute at 5711 South Woodlawn Avenue.

The 8,900 square feet in McGiffert House will allow the Seminary Co-Op to host more public events. The building will also contain the Plein Air Café, a venture by the owner of the Little Branch Café in the South Loop.

“We’re trying to replicate the sense of discovery without people bumping into each other all the time,” Cella said in an interview.

Once the University secures the construction permits it needs from the city for each building, the projects are set to begin later this month and are slated to end in October.

The meeting was organized by the University’s Office of Civic Engagement and Facilities Services.

The wheelchair ramp on the Institute of Politics will be at the rear of the building, since nearby residents have complained that such design features can be “an eyesore,” said Executive Director of Planning and Design for Facilities Services Alicia Murasaki.

Both the Institute of Politics and the Paulson Institute buildings will undergo exterior renovations as well, Murasaki added. “The building needs some TLC, so we’re going to be scraping and painting the existing woodwork,” she said.

Concerned with night-time safety and light pollution, residents asked if the buildings would sport the same garish lighting that shines from other University properties.

“There will not be those prison-yard lights that we’re famous for on the other buildings on the street, Murasaki said. “All the lighting on these buildings will be residential-scale.”

Administrators at the meeting also spoke to their hiring practices for the construction.

Roslyn Johnson, who is responsible for procuring contracts for Facilities Services, stressed that the University aims to hire 30 percent of its workforce from Chicago residents, 30 percent from minorities, and five percent from women.

The parking garage on South Ellis Avenue and East 55th Street will likely provide for the construction workers, although a final plan for managing traffic has not been worked out yet, according to Director of Civic Engagement Ellen Sahli.

Administrators said they were unable to provide a final projection of the total cost of the projects.

Fifth ward Alderman Leslie Hairston, who has been a major player in the University’s talks with the community over PD43, also attended the meeting, along with Vice President of Civic Engagement Derek Douglas.