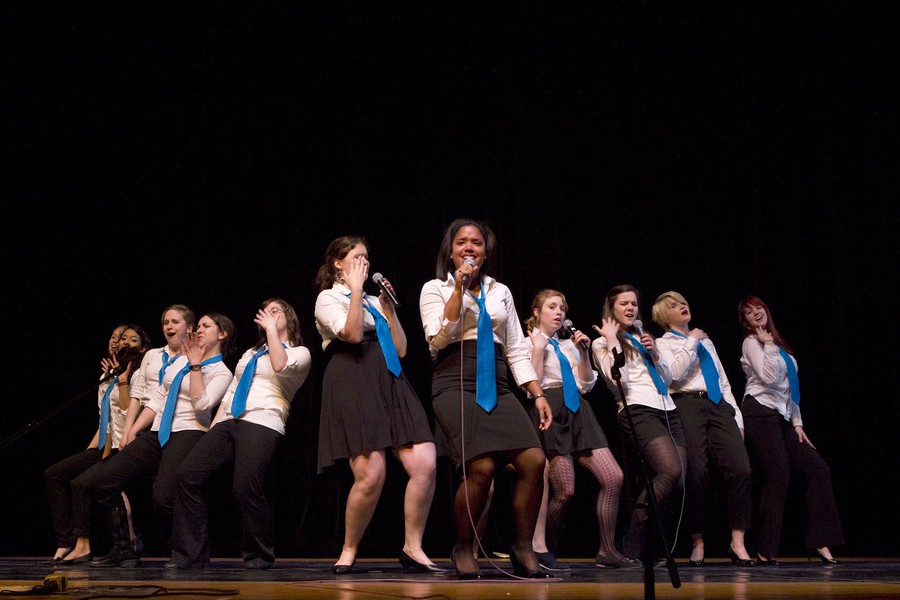 Perhaps no student activity is as stigmatized as a cappella. In this post-Glee era, it’s easy to take a cheap shot at the clusters of students bursting into impromptu song around campus. When they have nowhere else to turn, some poor, lost souls take comfort in lamenting the “dozens” or “hundreds” of a cappella groups at the U of C.

Ignore the haters. The fact that there seem to be “dozens” of cappella groups on campus is merely a testament to their presence, popularity, and quality. In reality, there are only seven: Two are all-female, one is all-male, and the remaining four are co-ed. All, however, are very, very good at the art of unaccompanied singing, and there are few moments more surreal than hearing a holiday classic or pop hit echoing through snowy archways during the winter. A cappella is one of the more immersive opportunities on campus; if you’re accepted to a group, expect to spend hours upon hours with your fellow singers, honing melodies to perfection, traveling to competitions, and even recording albums in professional studios.

To find out how to audition, visit the University of Chicago A Capella Council Web site at acapella.uchicago.edu. In the meantime here’s a short guide to all the different ways you can have your voice heard:

Voices in Your Head is one of the most acclaimed a cappella societies on campus, having recorded four award-winning albums. They perform yearly in national tours, and recently traveled to New York last April to claim fourth place in the collegiate international championship. Larger than most groups, they include both graduate and undergraduate students, and wield a diverse repertoire that includes original pieces as well as genres spanning R&B, pop, rock, and alternative music.

Men in Drag is one of the two all-female a cappella options, and unlike any other singing group: With a “no men, occasional drag” philosophy, these girls bring an edge and attitude to a cappella that’s difficult to find elsewhere. The girls of MiD also perform nationally, and will sponsor and co-host this October’s AcappellaFest. The 2012-13 school year will mark their 15th anniversary, their fourth annual December tour, and the release of their seventh album. The group is also well-known for their yearly pie/date auction in the spring: “Want Love? Buy Pie!”

With a new album in the works and a performance for the President of the United States in the books, The Ransom Notes make big waves for a 12-member outfit. This relatively small co-ed group performs each quarter and tours in the winter and spring, and are especially notable for their eclectic mix of indie rock and Top 40 hits.

Rhythm & Jews is perhaps the most eccentric group in the U of C’s a cappella offerings. Don’t be fooled, though: Despite its name, this co-ed group accepts students from all walks of life, and then proceeds to sing some seriously good tunes. We’re talking everything from “Lady Madonna” to “Georgia On My Mind” to “Ahava Ktana.” Formed in 2001, the group also performs an annual tour during the first week of winter break.

Unaccompanied Women is the second of the two all-female groups, and the oldest a cappella society on campus. Founded in 1989, the group is currently 14 members strong and performs everything from barbershop classics to folk ballads. Known for their prolific performances and matching costumes, they also host two Valentine’s Day events each year: Singing Valentines, where they sing to the recipient of your choosing, and a Speed Dating event.

One of the smallest singing groups on campus, Make a Joyful Noise is the U of C’s only Christian-based a cappella group. As such, their repertoire includes popular hymns and spirituals, Christian rock, and more secular choices from the Disney canon. They also perform in collaboration with Northwestern’s Harmony in Spirit group, and are especially popular during the holidays.

The only all-male a cappella group on campus, Run For Cover is just four years old, making it the youngest of the seven. Their relative newness hasn’t impeded their growth, though: They’ve expanded to 13 from their original four, and are already planning both a tour and an album.  Part of their success may be their typical rehearsal schedule, which is notably intense: two one-hour sectionals, a one-hour full group rehearsal in the week, and a two-hour full group rehearsal over the weekend.