Against ranked opponents, South Siders hold their own 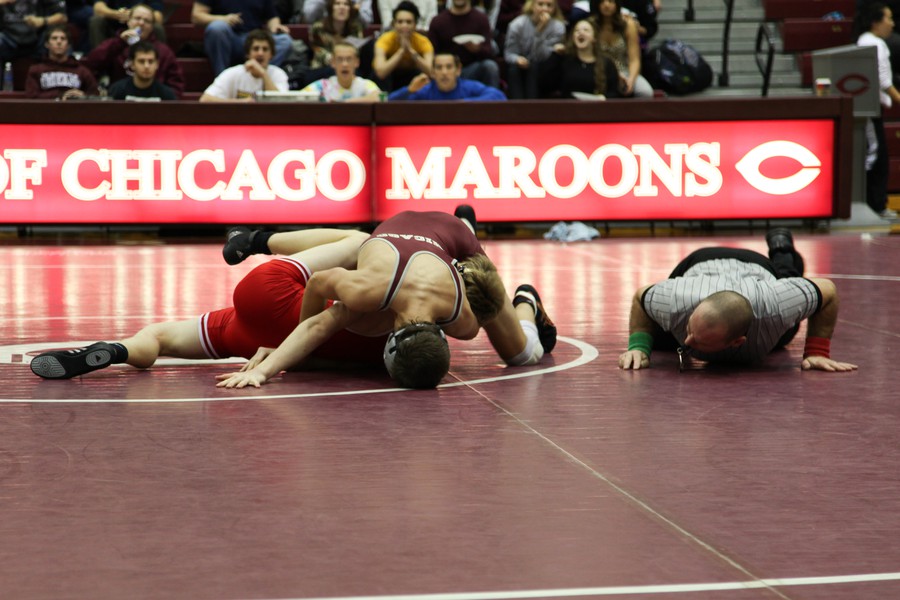 Following a 2–1 start to the season, the Maroons (4–3) continued their solid wrestling over winter break, stopping at several locations along the way.

The team, led by head coach Leo Kocher, first ventured west to Colorado Springs, CO in order to train. 25 of the 34 athletes on the roster traveled, and they certainly got their money’s worth.

“The two-a-day workouts combined with the high altitude created a pretty intense training experience,” Kocher said. “We got a lot of work done and were exposed to some high-level wrestling technique.”

The five-day trip included four days of practice and workouts at the Olympic Training Center and one day of scrimmaging with wrestlers from Air Force Academy.

After a short break for the holidays, the Maroons hit the mats again on December 29 at Northwestern University for the Midlands Tournament.

“Midlands is the best collegiate-style invitational tournament in the nation,” Kocher said. “The field of competitors is full of nationally ranked Division I athletes from the Big Ten, Big 12, and other Division II and NAIA. We enter a few wrestlers in this high-level event each season in order to raise their self-expectations and to learn from the experience.”

Three Chicago wrestlers competed: fourth-years Josh Hotta and Joeie Ruettiger, and third-year Sam Pennisi. Hotta and Pennisi struggled with their matches, while Ruettiger competed well. Kocher chalked the former’s issues up to the overwhelming quality of the opponents. Ruettiger also wrestled a tough opponent from the University of Oklahoma, who placed third out of 49 teams.

To round out the Maroons’ winter break throwdowns, they journeyed to Knox College on January 5 for the Chuck Porter Duals.

Overall, Kocher was pleased with his team’s performance.

“I felt the team competed well against nationally ranked teams Wabash (#10) and Augustana (#17),” he said.

“Riley Hankenson was in action for the first time and looked good, going 3–0 at 174 [pounds]. Mario Palmisano was also 3–0 on the day and defeated a nationally ranked opponent from Wabash,” Kocher said.

The Maroons placed fourth out of eight teams, finishing behind #15 Luther College, #10 Wabash, and #17 Augustana.

The Maroons continue their season on Saturday, January 19 at the Elmhurst College Invitational at 9 a.m.