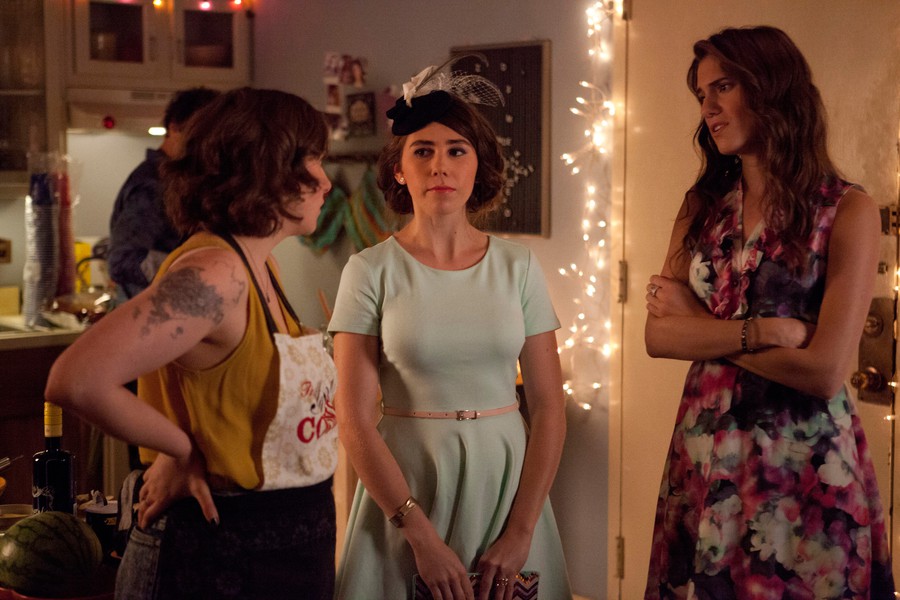 Once upon a time, Girls was that hot new shit that was featured on the cover of New York Magazine, hailed as the next great cultural game-changer, and praised for its honest portrayal of young twenty-somethings (many of them, thankfully, girls). Girls soon became the punchline of a joke, a phenomenon that was all the more targetable for the huge amount of praise that was heaped on it at a young age. It became the camel on whose back was placed every critic’s hopeful straws and ambitions and plans and dreams, until we all realized it wasn’t perfect. But Girls is taking on a subject in a way that not many other things are, and perfection is a lot to ask. It’s lonely being on the vanguard, but it’s also entirely necessary if we ever want to see more TV like Girls.

Enter round two, the sophomoric slump, the Empire Strikes Back: a new season for sex, fights, and expectations. Aside from the seemingly few big events that weren’t covered in the show’s promotions, the premiere doesn’t pull too many punches. We catch up with everyone (though not too much with Jessa [Jemima Kirke], disappointingly) and are reminded of the morass in which they all found themselves at the end of last season. While Marnie (Allison Williams) and Jessa are predictably unchanged, the difference we see in Hannah (Lena Dunham) and Shoshanna (Zosia Mamet) demands curiosity. Our imaginations can’t quite catch up with the unaired changes they’ve gone through. The gap between last season’s finale and this season’s premiere is an unknown place, all the more titillating for the effect its events are having on the show.

What I was happiest to see was that Hannah has actually substantively changed since we last saw her. She’s sorta seeing someone (albeit very carefully), still has her job, is happy with her new roommate, and is finally realizing what she can and cannot ask of herself and those around her. In an especially poignant (and long-awaited) conversation with her ex-boyfriend Adam (Adam Driver), Hannah delivers a Girls manifesto if ever there were one:

“I have tried this whole thing of being selfless, and taking care of everyone around me, and worrying about everyone before myself, but you know what? I’m an individual, and I feel how I feel when I feel it. And right now, I feel like I don’t ever want to see you again. Is that OK?”

Because of the seeming inseparability between the personal Dunham, who writes Girls, and her portrayal of Hannah, her actions and proclamations traverse different layers of her identity, affecting everything she’s associated with by way of osmosis. Now that Hannah seems to be discovering the importance of choice and self-respect in her own life, the rest of the show is colored with my hope for its growing maturity. Just as the show promises, Hannah (if not the other characters) really is “almost kind of getting it together.”

However, these realizations still leave an important question looming: Should maturity be something that we care about and that Girls aims for? Of course, one of the show’s main criticisms was that it depicted spoiled, privileged white girls who are upset that they can no longer live off their parents’ money and are forced to find work. Part of Girls’s appeal was its focus on the kinda gross female slacker. It was honest about its characters and didn’t try to make them likeable. Hannah ate cupcakes in the bathtub and made bad decisions about sex; while she was not a character anyone likely would (or should) aspire to be, she was a female character who wasn’t seen elsewhere. While part of me wants to see Hannah get her life together and be a little more responsible, is this really what Girls is for? Or are we conflating happiness with busy-ness, maturity with age, and wisdom with mundanity?