Quaytman critiques a campus institution from within 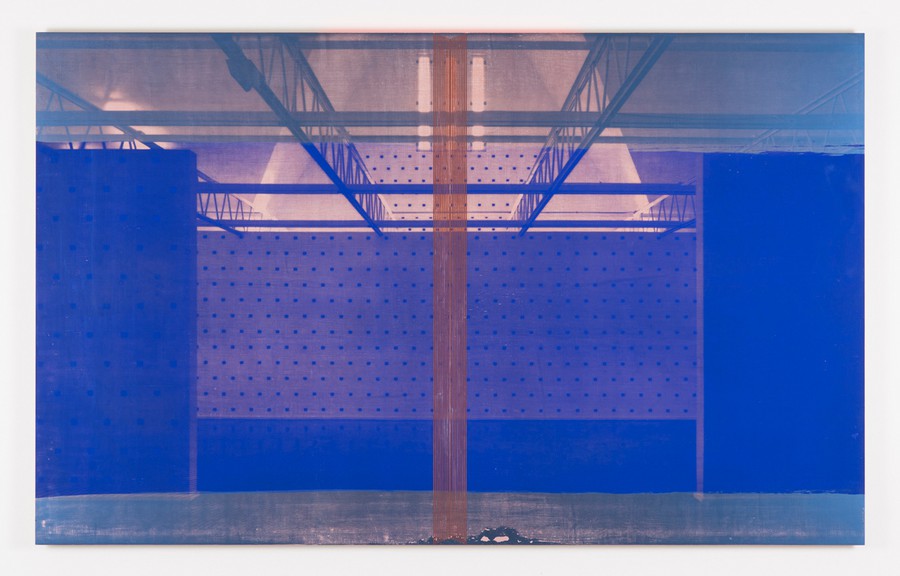 R.H. Quaytman’s current show at the Renaissance Society, Passing Through the Opposite of What It Approaches, Chapter 25, immediately registers as a brew of modernist tropes. Upon entering the gallery, one sees paintings hung spread out on three free-standing walls. Most works are composed of either photo-based silkscreen imagery or optical patterning, and, in many cases, a layered combination of the two. The works are not shy in their reference to an array of modernist movements in the ’60s. One painting, “Imprints of a no. 50 brush repeated at regular intervals of 30 cm,” has a title that sums up its content and process. For anyone who is familiar with Conceptual Art, this reference is legible right away.  Quaytman makes even more extensive and ostensive references to Op Art and Minimalism.

The theme of institutional critique runs, somewhat loosely, through a body of work that is a heady concoction of pre-existing modernist techniques. The most overt allusion Quaytman has made is in and of the institution itself—The Renaissance Society. The painting hanging in the center of the central wall is a blue-tinged photographic representation of the interior of the museum, overlaid by a pattern of squares. Opposite this work is a picture of the floor plan of the museum. It would be difficult for any viewer inside the museum not to recognize the subject matter as this very space. The figures in the paintings are also deeply related to the museum. At least three paintings are of Susanne Ghez, who was the executive director of The Renaissance Society for 40 years. Two are of Anne Rorimer, the Chicago-based curator and art historian whose writings have become testimonies of many modernist movements. The bookshelves featured in the two pictures belong to Hamza Walker, associate curator of the museum. The constellation of museum-related people and architecture vaults Quaytman’s practice into the realm of Daniel Buren, who was famous for his institutional critique.

Perhaps it is no coincidence that Buren, a conceptual artist who integrates stripes into different architectural spaces, exhibited at The Renaissance Society in 1983. Buren, who sees stripes as a “neutral form” with their regular, minimal visual content, uses them as a constant to highlight the variety of their settings. Hamza Walker noted the genealogy of institutional critique in his introduction, claiming that “produced on a steadfast installment plan, the work (Quaytman’s) is institution-bound with no bones about it.” Whereas Buren’s stripe paintings allowed art to be taken out of the institution and into the sphere of everyday life, Walker argues that that freedom is unavailable to Quaytman. “Quaytman has all but declared the work institution-dependent,” he writes. It’s hard to oppose this claim. After all, institutional references can only be fully effective in an institutional context. Once Quaytman’s photo is taken out of The Renaissance Society, how many of us will still recognize it as The Renaissance Society?

While institutional critique is no doubt a major issue that Quaytman tackles in this show, this exhibition is rich in other themes. For example, the title of this show, Passing Through the Opposite of What It Approaches, Chapter 25, has offered plenty of material for consideration. Passing Through the Opposite of What It Approaches has a lyrical sound to it that echoes many of the lyrical qualities to Quaytman’s patterns. It also seems to play with the idea of direction, which is yet again reflected in visual terms in the perspectival surge in Quaytman’s picture. Chapter 25 indicates a logic of seriality. Read through Hamza’s introduction to The Renaissance Society’s publication about the exhibit, which can be dense but rewarding, for some theoretical contextualization. You may discover a new reference or new material that even the curator has not picked up.

Passing Through the opposite of what it approaches, chapter 25, The Renaissance Society, through Feb 17