If you like goat and good burgers, then as far as diners are concerned, Little Goat may be the place for you. 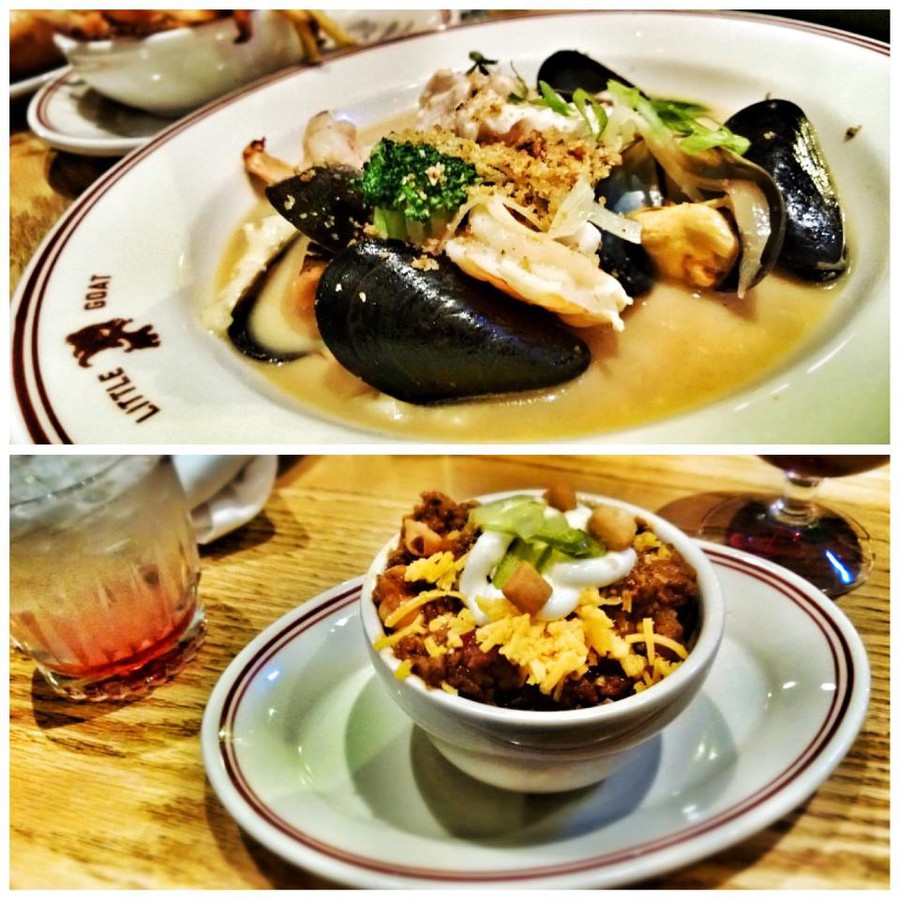 Three hundred fifteen feet. Fifty-nine seconds of walking. It’s all that separates Stephanie Izard’s new diner, Little Goat, from its big sister Girl & The Goat… aaalll the waaay across the street. Two hundred seventeen feet away, a mere 49 seconds, lies another upscale diner, Au Cheval…aaalll the waaay at the other end of the block. Even The Publican’s only a two-minute sprint from satiating your forcemeat fix. And then there’s little ol’ you, lost in a Bermuda Triangle of pork products and porker-producing dishes, indecision racking your gastro-mind. But fear not, intrepid diner. As counterintuitive as it may sound, sometimes you must let your heart, not your stomach, light your path to salivation.

It ain’t easy in this part of town. G&G, Au Cheval, and The Publican will tempt you with stylized, white-collar takes on the classic American repertoire. Resistance seems futile, yet can be worthwhile if you deviate slightly from this well-beaten culinary path because Little Goat takes the road less traveled in producing fine fare for the common man. There are no “quotation marks” on the dishes in name or execution and no irony in its diner identity. There is only a loving, non-judgmental embrace of American cuisine—white bread, waffles, and all.

From the spinning sign outside to the spinning stools at the counter, everything about Little Goat proudly bleats retro chic. While the staff-to-customer ratio might be higher than that of the Wayne Manor, the service is informed, attentive, and cozy. Sitting in a booth with your little white coffee cup, you half expect a daily newspaper to materialize in your hands. And it does! Well, not a newspaper, but a menu of comparable size and scope. It’s absurdly overwhelming—spread out over four tall pages, teeming with headings like “Cereal Killers,” “Sammiches,” “Burger Shoppe,” and “Supper Club,” and more sidebars than a psychology textbook. Whereas a typical diner menu is full of throwaway items, it’s hard to blatantly disregard anything from Stephanie Izard’s playbook. But there is a silver lining, as it’s all the better reason to come back time and time again.

As any good diner knows, breakfast should not be confined to a pre-noon prison. Some breakfast items border on Seussian levels of absurdity, like the Fat Elvis Waffles that literally come with an ice-cream scoop of peanut butter-butter; or the Breakfast Spaghetti N Clams, which is as whimsical as it is worrying. The Kimchee & Bacon & Eggs & Pancakes Asian Style Breakfast Tasty Thing maintains that same sense of fun, while advocating for the where-there’s-pork-there’s-kimchee philosophy that appears in many of dishes. Sometimes cakey, sometimes crunchy with the kimchee and bacon, it is the perfect cross-breed of pancake and omelet, an intentionally bastardized take on the classic Korean kimchijeon.

The biggest success came in the form of a dish ascribing to another of the menu’s central tenets: sweetness as a harbinger of salt. While the Bull’s-Eye French Toast could have spent more quality time moisturizing in its milk and egg bath to avoid a dry interior, the toad-in-the-hole runny egg in the center more than compensated for this oversight.

Further in keeping with Diner-ology 101, burgers marched reliably from the kitchen. Diners have their choice of beef, goat, turkey, or veggie, in one of six styles. Alas, I could not pass up on kimchee again, but I did not regret it for one second. The soft, squishy bun, the spicy-ish mayo, the firm snap of the bacon, and a beef burger that was juicy enough to overcome the handicap of its medium-done gray interior. Excessive? The fact that the whole thing was topped off with an egg probably answers that question. Yet somehow the burger was remarkably self-contained—a dense, little bomb with no single element disrupting my reckless enjoyment. If you measure a diner solely by the quality of its burger, then Little Goat is seriously giving Au Cheval a run for its money.

Perhaps the biggest surprise of the meal was reserved for the least anticipated guest: the weary, jaded standby that is the club sandwich. What is usually a dumping ground for deli meats, plastic masquerading as cheese, and vegetables one step removed from a compost heap, Little Goat magically transforms through the power of quality ingredients—though quantity ain’t exactly lacking either. This Fat Club stands tall, towering at like half a foot, proudly asserting its claim to the sandwich kingdom throne. Layer upon layer of roasted turkey, sweet tasso ham, bacon, house-made toast, avocado, mayo, veg… Simply put—the works.

But where’s the goat? Although it pops up every now and then on the menu (Shrimp and Grumpy Goat Grits, Sloppy Goat), the only formulation that caught my attention was the Farmers Pie made with goat, and yet somehow they were out of it by late afternoon. Anyway, I firmly believe the animal is best honored as a stand-alone dish, and not as a quirky meat substitute, especially not on a burger.

Remember, this is not the Girl & the Goat you are looking for. You still have to ahead across the street, and probably, like, half a year of reservations into the future, if that’s the kind of adventure you are looking for. Little Goat is definitely exciting, but the thrills are noticeably cheaper. Perhaps it’s best reserved for diners who would rather eat crispy bacon than a crispy pig’s face, or keep it simple with a vanilla shake instead of pretending to like bleu cheese gelato.

Little Goat doesn’t have the time, or need, to pretend. Nothing on this menu will “offend” or “scare” diners, unlike the hit-or-miss nature of G & G. Sure, the high points of a meal at the latter are miles above Little Goat, on par with any of Chicago’s other fine dining destinations. But let the grown-ups go and enjoy their kohlrabi and green beans. Sometimes you just want to be a kid again, eating breakfast for dinner, a stupid, syrupy, greasy grin on your face.

Little Goat, located at 809 West Randolph Street. The cost of an average sammich is $12.