With Amour, Haneke has his finger on a riveting pulse 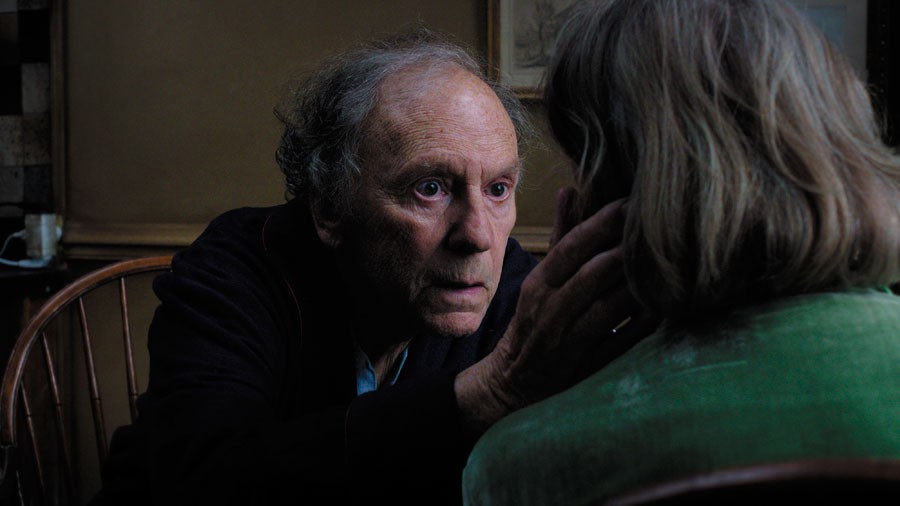 There’s a piano teacher and Isabelle Huppert, an attempted home invasion and a man named Georges—yet somehow if you didn’t know this was a Michael Haneke film, you wouldn’t be alone. In Amour, the famed Austrian director forgoes violence for bodily trauma of a different kind, inflicted by time and time alone.

Georges (Jean-Louis Trintignant) and Anne (Emmanuelle Riva) are in their eighties. They have breakfast together every morning, they sleep in the same bed, they volley compliments at one another with flattered scoffs, and sometimes they even go on dates. In fact, they’re on one when Amour begins. Anne’s a retired piano teacher, and one of her former students is in town for a show. This is the only moment Haneke’s screenplay allows us out of the couple’s airy Parisian flat.

Returning home from their concert, Georges and Anne notice the chipped varnish and damaged plate that signifies someone tried to pick the lock on their front door. Where Funny Games, another Haneke film, used a home invasion as a meditation on violence and the viewer, here, a picked lock serves only to elevate the tension. But the door couldn’t be opened, and the robbers couldn’t get in. This is in an insular world, after all. Neither Anne nor Georges will be able to get out.

Over breakfast one morning, Anne goes still and unresponsive. Georges, alarmed, yells for her attention, wets a rag and puts it on her head, to no avail. Riva’s eyes are chillingly flat. Georges shuffles away, leaving the tap streaming, to put on pants and call for help. Suddenly the faucet stops. The camera follows him to the kitchen, where Anne scolds Georges—what was he doing, leaving the sink on? We find out later that Anne had a stroke. When we next see her, she’s paralyzed on her right side but still spirited, willing to ride out the future so long as Georges makes her a promise: no more hospitals. Maybe it’s love, maybe it’s futility, but he agrees. Another stroke, but Georges refuses to renege despite his daughter Eva’s (Huppert) protestations. This is Amour: a graveyard love, a quiet apartment.

I’ve always favored the Oscar nomination system over that of the Golden Globes—to me, splitting Best Actress/Actor in Drama from Comedy or Musical, and the implication that they’re then mutually exclusive, seems like just another cash grab by the Hollywood Foreign Press Association. Yet, to rank Riva next to Oscar frontrunners like Jessica Chastain and Jennifer Lawrence also seems absurd. I mean no disrespect to the dual talents of Chastain or Lawrence, as both delivered stunning performances, but what Riva does in Amour transcends them: She is a destructive force, embodying every aspect of Anne and her physical dissolution to the point that, when I left the theater, I felt all of the weight that might come with the experience of parting with someone I’d known my whole life. Her transformation from the film’s start as a stately, regal beauty to the diapered, moaning shell of herself near its end is almost indigestible. Trintignant, to his credit, is resonant, but, in the presence of Riva, he mostly just reacts with the rest of us.

Haneke’s film is meditative, wedding silence and visual stillness. For the duration, sound remains sparse and the noises we do hear are employed carefully. A pigeon flies inside the flat and Haneke holds the frame as Georges shuffles around the room with a blanket, trying to catch it. He misses, and misses again. A nurse comes to wash Anne, who at this point can only moan the word “Hurts.” Georges stares at Anne. We stare at Georges. We hear the drag of Georges’s stiff leg, Schubert’s keystrokes made haunting at the piano, and clinking in the kitchen when we know there shouldn’t be any. Haneke’s camera constantly peers through doorways, removed and unflinchingly voyeuristic. At one point Georges tells Eva, “Rien de tout cela ne mérite d’être montré.” Or, “None of this deserves to be shown.” And isn’t that just it?

When the credits began rolling in silence, my theater, as it emptied out, took its cue. As did my friend and I as we made our way through the escalator labyrinth of the Landmark Century Cinema. Plan your viewing of Amour carefully—come curtains, you’ll find it has both muted and throttled you. When we finally did find our voices, my friend and I decided that, in spite of it all, the film isn’t bleak. For me, in reference to a Haneke work, that says something. Despite the heaviness of Amour, despite its insularity and inevitability, it truly is a love story. Perhaps it is even the love story.