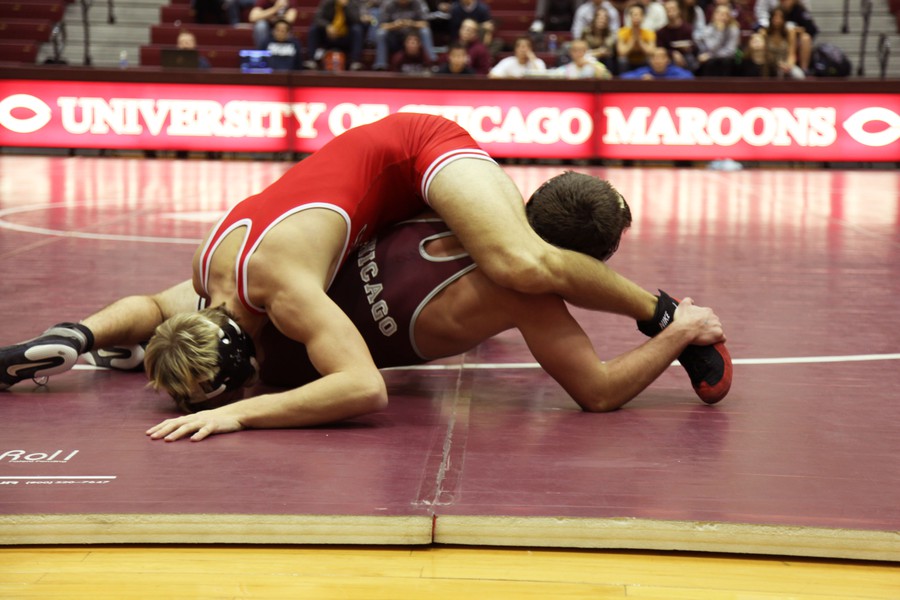 Continuing their solid performance this season, the Maroons (4­–3) claimed three weight class winners and seized third place at the Elmhurst Invitational on Saturday.

Fourth-year and #1 seed Joeie Ruettiger (149 pounds) handily won all three of his matches, capturing the title in his division. Also snatching first-place victories in their respective divisions were second-year Ryley Hankenson (174) and second-year and #2 seed Mario Palmisano (197). In addition, second-year Will Long (133) placed second in his division.

“We had strong performances from our four finalists,” head coach Leo Kocher said.

However, Kocher believes that the Maroons could’ve finished better than third overall.

“We also had some other [wrestlers] fall short. They did not fall short by much, but it was the difference in us not winning the tournament,” Kocher said. “In a tournament like this you really want placers in the top three in every weight class. We achieved that in [only] seven of ten [classes]. We still have not put [forth] our best effort on the mat and we need to going forward.”

“I think that our team this year has a staggering amount of potential,” he said. “We definitely had many individuals capable of taking first last weekend, but sometimes things just don’t go your way.”

In addition to the three first-place and one second-place finishes, first-year Steven Franke (174), third-year Sam Pennisi (184), and third-year Jeff Tyburski (285) all captured third place in their respective divisions.

Palmisano has defeated his opponent in each of his last seven matches.

“There is no secret,” Palmisano said. “A sound mental attitude, perseverance, tenacity, dedication, and passion are the only things necessary. Passion is especially important. Having fun on the mat and a love for the sport is just as important as training and practice.”

The Maroons have a two-week break between this past weekend’s meet and the Wheaton Invitational February 1–2, and Coach Kocher has high expectations for his team.

“We need to pick it up in preparing for our remaining competitions,” Kocher said. “We have a major tournament challenge coming up next with the Wheaton Invitational, one of the toughest Division III tournaments in the nation, as well as our UAA championship February 16. We need every team member working hard the last six weeks of this regular season to get there in peak form.”

Palmisano is a little more optimistic about the Maroons’ chances down the stretch.

“I am confident that those who didn’t do as well as they had hoped will step up their training to build up momentum for the Wheaton Tournament in two weeks’ time,” he said.

Chicago travels to Wheaton for the February 1–2 tournament, hitting the mats next Friday and Saturday.