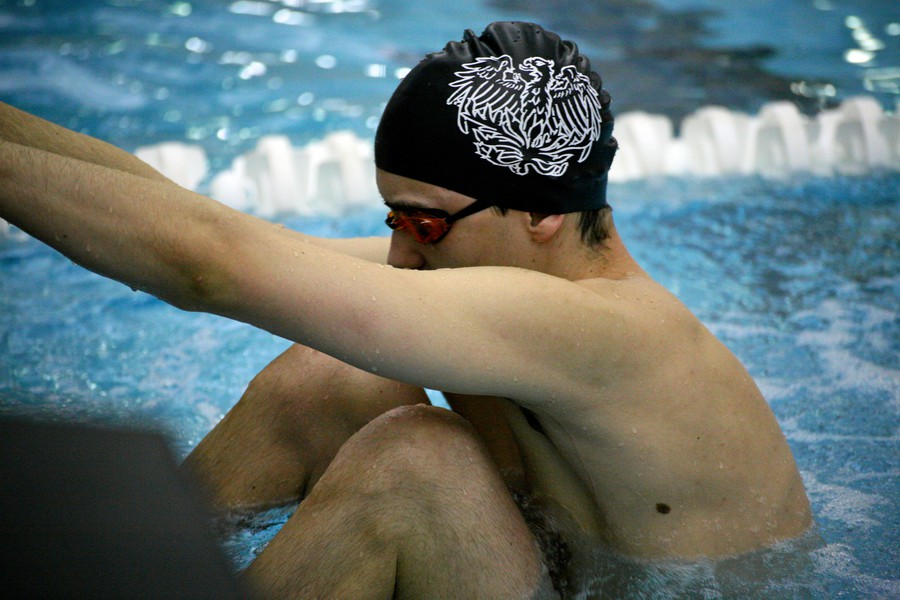 After losing to a superior DI UW–Milwaukee squad last weekend at home, the Maroons traveled to Greencastle, IN, and split the results of their dual meet against DePauw. The South Siders won on the women’s side with a score of 176–123, while the men’s team was defeated by the Tigers by a final tally of 187–110.

For the men’s team, which was hoping for a victory against DePauw this year, the 77-point loss was disheartening.

“We had high expectations coming into this meet,” first-year freestyler Matthew Veldman said. “After a narrow loss last year on the men’s side, we really wanted to return the favor this year. I think most of the men expected to swim better than we did.”

The men’s performance at the meet was discouraging, but it can be taken as a learning experience with important meets on the horizon.

“Losing was disappointing, as we would have liked to send our seniors out with a win in their last dual meet,” head coach Jason Weber said. “In the grand scheme of things, losing is not a big factor, but I was not happy with how we lost. We could have won if we were more focused, matched their intensity, and didn’t make so many mental mistakes while racing.”

While this loss for the men’s team wasn’t an optimal way to finish out the team’s dual meet portion of the season, the Maroons are looking to put this setback behind them as they head into the UAA Conference Championship in two weeks.

“One of the most important things to do right now will be to forget about this meet,” Veldman said. “It is hardly something to dwell on now that championship season is here. The most important meet of the year for us is UAAs, so we’ll be shifting gears in our training as we wind down and rest in preparation, as well as mentally preparing ourselves for the competition we’ll face.”

Though the men’s team didn’t have its best performance as a group, many individuals had strong showings despite not tapering for the meet. First-year James Taylor took first in both the 100-yard breaststroke and the 200-yard IM, while fellow first-year Bryan Bunning won the 100-yard backstroke. On the diving side, second-year (and UAA Diver of the Week) Matthew Staab took home victories in the one-meter and three-meter dive events.

On the women’s side, the Maroons earned a decisive victory, which will give them momentum looking ahead to the UAAs. The team was led by first-years, with Jen Law and Ciara Hu scoring multiple victories. Law took first in the 200-yard butterfly, 200-yard backstroke, and 200-yard IM, while Hu won the 100-yard breaststroke and the 500-yard freestyle.

With the UAAs two weeks away, the Maroons are focusing on bringing the intensity of their training down and perfecting racing techniques. This year, Chicago will be hosting the UAAs, giving the South Siders an added incentive to post top times and take down the competition.

“Now is the time when we put the ups and downs of the season behind us and trust in our training to take us where we want to go,” Veldman said.

Chicago will host the UAA Championships February 13–16 at the Myers-McLoraine Pool, located inside Ratner.