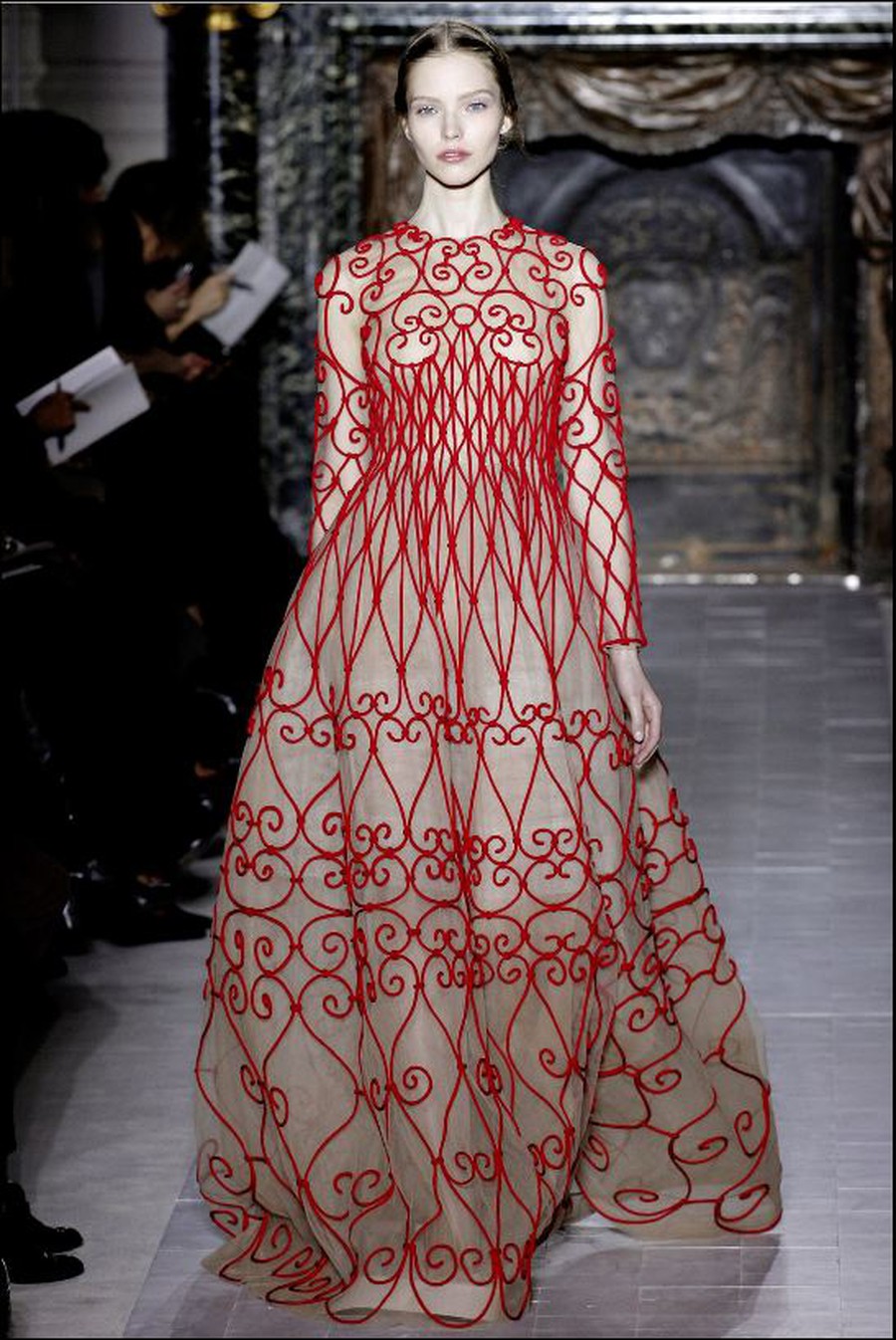 Look fetching in fencing in this Valentino that costs more than any fence.

The Paris couture shows are where a designer’s most extravagant fantasies come to life. After months of preparation, elaborate and outlandish garments hand-stitched by professional seamstresses from the highest quality fabrics are displayed in the most prestigious locations Paris has to offer. For the spring/summer 2013 shows, creative directors of various fashion houses rarely strayed from the opulence and intricate detailing that are synonymous with the popular conception of haute couture, opting for traditional visions of luxury rather than avant-garde or unprecedented looks.

In order to show couture in Paris, designers must first receive permission from the Paris Fédération Française de la Couture, which typically requires that designers have five years of couture experience. However, newcomer Giambattista Valli was granted couture status after his first guest appearance for autumn/winter 2011, and continues to prove that his standard of work complies with that of the rest of the couture lineup. Valli experimented with some drastically different proportions, ranging from tailored minis to dramatic full skirts. He began with some opaque pieces in dark hues before transitioning into lighter gowns with sheer accents. Transparency was also popular at Elie Saab and Valentino, who rejected floating gauze in favor of sheerness peering out from under thick lace, heavy embroidery, and brocade. Count on the perpetual fashion iconoclast Jean-Paul Gaultier to stray from these trends with tapered maxidresses, bold stripes, and one of his signature sharp corsets.

At Dior, Raf Simons, who was appointed creative director last year, seemed as though he was still on a mission to prove that despite his tenure at Jil Sander (the most minimalist fashion house on the block), he can still take on the drama and flair of the Christian Dior legacy. His runway show, in which models traipsed daintily through Paris’s Jardin des Tuileries, was filled with references to the New Look popularized by Dior in the 1950s: bodice tops, wasp waists, and full skirts. There was occasionally a piece that played with volume and proportion, but most of these seemed like random additions, not part of a cohesive vision. The overall look was modernized only by the models’ pixie haircuts and bright rhinestone-encrusted lips, but hair and makeup should not be the transformative aspects of a collection.

Simons also relied heavily on elements that are quintessentially evocative of spring, such as pastels and florals, which by now have become clichés of spring/summer collections. There were certainly some stunners among the flower-spattered gowns in lilac, mint green, and classic Dior soft pink, but they didn’t seem to be the product of any significant new inspiration.

The Chanel show similarly displayed many self-conscious nods to the history of the house of Chanel. Creative director Karl Lagerfeld recently received much acclaim for his Scottish-inspired collection shown at the Linlithgow Palace. Critics have praised the collection for striking the perfect balance between stepping away from Chanel’s classic French style (which can border on obsessively French), while drawing a relevant connection to Coco Chanel’s own history with Scotland—most notably her love of tweed. His spring/summer couture collection, also held on a garden-themed runway at the Grand Palais, initially showcased nubby jackets and long, tailored dresses—Chanel signatures. Lagerfeld’s quest to maintain the traditional Chanel aesthetic is admirable, but Coco Chanel also believed that a woman should dress for her time, and whether she would have wanted a woman in 2013 to wear a 1930s-style dress is arguable. However, the show progressed to show floral prints against dark, liquid-like satins that lacked conventionally florid prettiness. The show’s finale revealed gowns with airy, sheer tops paired with unexpected feathered skirts. These were the collection’s highlights, as they lent an element of surprise to couture finery.

Unlike ready-to-wear or accessories collections, couture does not exist to be a profitable industry. Only a handful of people in the world actually buy couture, usually members of long-standing European nobility who purchase these pieces for aesthetic value and craftsmanship as if they’re betting on Dutch Masters paintings at Sotheby’s. Couture has no place in department stores, and actresses are only rarely lent couture dresses for the red carpet because they don’t comply with the public notion of Hollywood glamour. Free from these profit-making constraints, designers can use couture collections as the ultimate means of self-expression. However, with certain fashion houses, it seems like the creative directors are more closely associated with the house’s historical image than their own artistic vision. It’s a fine line to walk, and often we are grateful to see homage paid to the name on the label, but it begs the question of what these legendary designers would have envisioned for contemporary women.