Arendt biopic hits the mark, but misses the woman 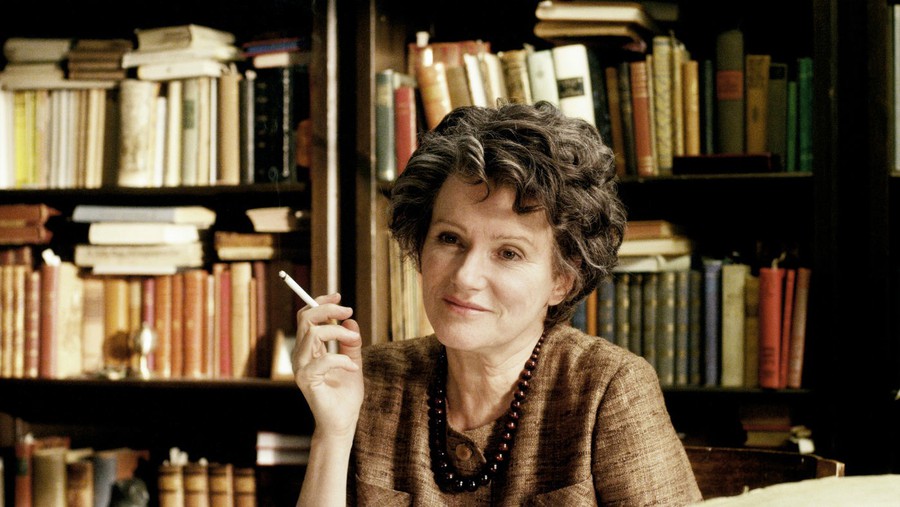 “Can a filmmaker make a biopic with a book as its protagonist?” asks Saul Austerlitz in his review of Hannah Arendt (2012) for The New Republic. This is the challenge of the latest film from Margarethe von Trotta, a German director known for featuring strong female characters. The film is a portrait of the German philosopher Hannah Arendt (1906–1975) during one particularly defining, rich episode: her writing of the controversial book Eichmann in Jerusalem, the philosophical message of which is at the film’s core.

Originally entitled The Controversy, the film tracks the writing and reception of Arendt’s divisive reporting on the trial of Adolf Eichmann, the Nazi bureaucrat in charge of managing train deportations of victims to concentration camps. It opens with Eichmann’s abduction by agents of the Mossad, Israel’s secret service, in Argentina, where he fled to in the aftermath of World War II. His arrest makes headlines all over the world, being by international law an illegal extradition. Seeing an opportunity, Arendt offers to report on the trial for The New Yorker, which would later serialize her coverage before it was published as a book in 1963.

For Arendt, the trial was staged by Israeli officials as a “show trial.” It was geared toward the media, televised and open to the press. Coverage of hysterical audience reactions and fainting witnesses verged on the sensational. In the middle of it all was Eichmann, a scrawny, awkward-looking man with huge glasses who stared straight ahead and testified in a bulletproof glass booth built for his protection. It is precisely against this spectacle that Arendt’s philosophical analysis cuts.

Throughout the trial, Eichmann boasts of his sense of civic duty and says he was “following orders”—claims that Arendt, unlike most, takes seriously. She begins to notice that Eichmann, counter to his portrayal in the eyes of the world as a bloodthirsty, anti-Semitic murderer, comes across as a “nobody” and even a “clown” for his use of cliché and absurdly bureaucratic language. From this radical dichotomy—the mediocrity of the man and the cruelty of his deeds—arises Arendt’s famous concept of the “banality of evil”: that “such remoteness from reality and such thoughtlessness can wreak more havoc than all the evil instincts taken together.”

Her theory acquired psychological backing when Yale professor Stanley Milgram, inspired by the trial, conducted his famous studies on obedience, which suggest universal moral weakness. But Arendt’s moral judgment does not waver: “Even if 80 million Germans had done as you did, this would not have been an excuse for you.” Arendt ends her book addressing Eichmann: “You must hang,” and he ultimately does, convicted of crimes against the Jewish people.

Despite this insistence, her work is immediately taken by many as an exculpation of Eichmann and, most controversially, as an attack on the Jewish ghetto leaders, many of whom testified in the trial that they had cooperated with Nazi demands out of fear and to maintain order. In Arendt’s view, most of them simply could have done more to resist.

This charge sets off a storm of accusations, prompting headlines such as “Self-hating Jewess writes pro-Eichmann book.” Arendt receives droves of hate mail, is accosted by Israeli officials, and is accused of having a heart of ice, though she rejects this as a “character assassination” that fails to engage with what she actually wrote.

As Arendt explains herself, “Trying to understand is not the same as forgiveness,” and the film masterfully captures her authentic curiosity about the problem of evil. But that same sense of understanding is all but absent in her critique of the Jewish leaders. “I’ve never loved any people,” she later tells an old friend in Israel. “Why should I love the Jews?”

While von Trotta captures the passion of the Eichmann controversy, the challenge of representing Arendt’s thinking proves too great. The film contains many drawn-out scenes of Arendt reclining in her apartment, smoking a cigarette, her face strained in thought. This is not how great philosophy is born, and glorifying such mundane scenes verges on hagiography. But one feature of them is striking: Arendt’s reflection on scenes from the trial reopens the wounds of “those dark times,” as she calls them, when she herself was imprisoned in a Nazi labor camp. (She managed to escape with her husband to the United States in 1941.)

Ultimately, the film delivers flashes of inspiration behind her thought, but falls short of genuine engagement with it; for this, you’ll have to read the book. What matters to von Trotta is Arendt’s philosophical courage and how much of herself she put at stake in her argument; embodying that courage is what won lead actress Barbara Sukowa her much-deserved German Film Award.

We are asked to contrast this Arendt with her former teacher and lover, the German philosopher Martin Heidegger (Klaus Pohl), who joined the Nazi Party in 1933 and never repented—a fact that weighs heavy on Arendt. Unlike Heidegger, Arendt tasks herself with changing history. As she concludes in her public defense of the book before a lecture hall full of students: “I hope that thinking gives people the strength to prevent catastrophes in these rare moments when the chips are down.”

It is at these triumphant moments that von Trotta’s Arendt becomes more than words on a page. This Arendt is a warm, whole, thinking human being, inextricable from her own history and experience of persecution as a Jew. Most centrally, her life is grounded in deep friendships. But even these are sacrificed as her writing alienates her from her German-Jewish colleagues. Only her husband Heinrich Blücher (Axel Milberg) and close friend Mary McCarthy (Janet McTeer) stand by her to the end.

As Heidegger cautions Arendt upon their first meeting, “Thinking is a lonely business.”