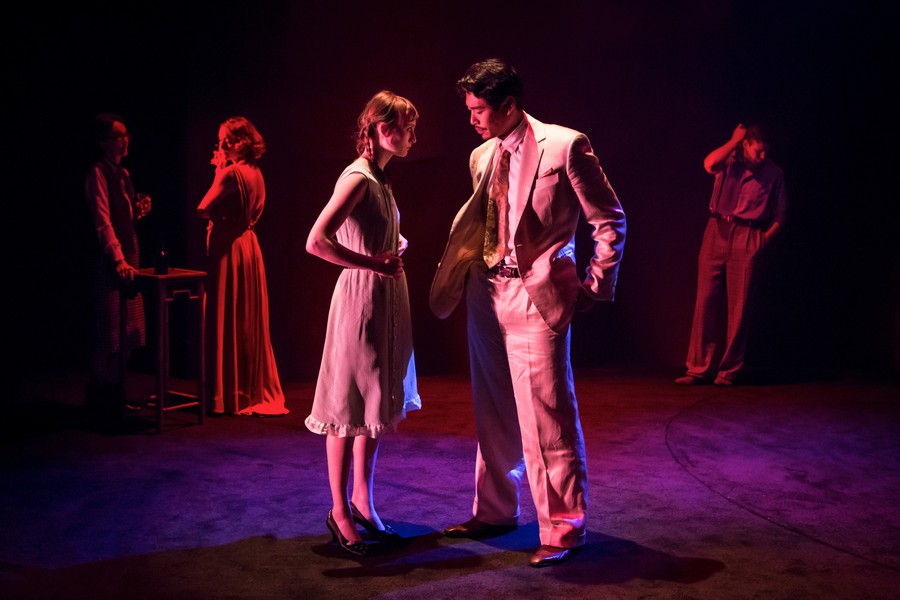 It begins with a black canvas stage, a typewriter, and a small woman with inquisitive, passionate eyes set in stately wrinkles—all bathed in a fog-swirled spotlight. It seems this woman, a writer, cannot tell her story without reliving it, though. So she rises as the stage begins to move and her story unfolds. A girl—unnamed but dear—discovers the pull of poverty, independence, status, loyalty, and love in all its strange forms.

Set in the French Quarter of Indochina in the 1930s, The North China Lover is a powerfully human piece. It makes its stage debut at Lookingglass Theatre after having been adapted by Heidi Stillman from the film script for the autobiographical novel The Lover (L’Amant) by Marguerite Duras. The ingenuity of the show lies in the introduction of a character, M (Deanna Dunagan), meant to be Duras herself. She moves within the story, shadowing The Child (fourth-year Rae Gray) and narrating the story in a way only many years of reflection could allow.

M’s story begins with dancing, a joyous moment that is cut short by her brothers’ brutality. Shortly afterward, the girl goes back to boarding school in Saigon and meets an unnamed elegant Chinese millionaire (Tim Chiou) on the ferry. He offers her a ride in his limousine, and the two, bound in an odd tension of attraction and denial, bounce along past vividly described rice paddies toward the city. As M says with a bittersweet note as she watches, “The story is already there.”

The two meet again as the romance, the affair, and the blurred lines among everyone fall into place. She is young and independent and searching—hungry to experience, to know what it means to be more, to be loved in a way that her family never offered. She refuses to fade into resignation, as her mother has done. He is unexplored, wealthy, careless, and also searching, desperate for meaning in a life with no needs unmet.

The tight, sparse space of the intimate theater allows for a raw presentation of this dynamic tale. The rotating stage, unique lighting, and well-placed sounds of the city bring to life the mixture of theater, film, and novel that contribute to the feeling of watching the writer’s memories play out. In her narration, M refers frequently to the play’s use of old Hollywood tricks: The melancholy theme that plays as an undercurrent in certain scenes serves to link them and to evoke a certain nostalgia, and the imaginary camera focuses on the space between two people in a unique way.

“It [the show] was really long in the making,” said Gray, an up-and-coming name in Chicago theater, most recently known for her role beside William Petersen in Slowgirl at the Steppenwolf Theatre. Stillman began adapting the work in college, and after over 20 years of work brought it to a workshop with Gray and Chiou in 2012 before presenting it to Lookingglass Theatre. “It’s a world premiere; it’s very experimental,” Gray explained, adding that she had always dreamed of working with Lookingglass. “The language is gorgeous and very lyrical and very poetic. It’s sometimes hard to make the [dialogue] more active. It’s been an incredibly rewarding process, but it’s also been very challenging. It’s going to keep growing as the run goes on, and I’m looking forward to growing with it.”

Gray’s strongest passion lies within the complexities of the character she plays. “I think it is something I possess, as well [as my character]: [I’m] both childish and very mature.” She paused. “You have to understand her situation…. She has this hunger to experience things that contradicts all of the bad things that happened that made her grow up.”

The North China Lover captures a startlingly realistic sliver of youth and discovery within the context of great difficulties, mixed in with moments of comedy and the naive commentary of The Child’s friend, Helene (third-year Allison Torem). It leaves the audience in bittersweet contemplation of the ways in which good and bad intersect, and how they are ultimately remembered.

The North China Lover is playing at Lookingglass Theatre Company through November 10.