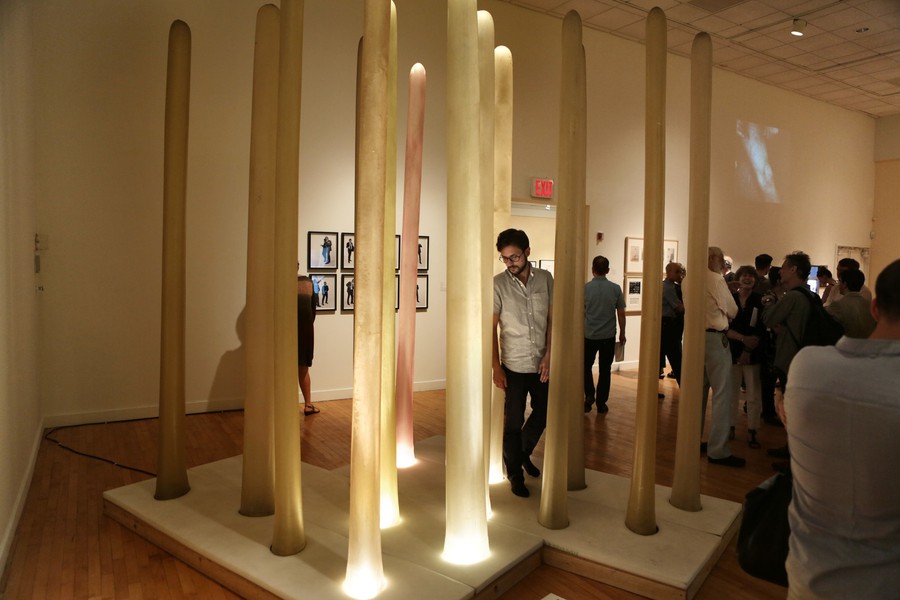 If you were to consider the Smart Museum’s newest exhibition, State of Mind: New California Art Circa 1970, in terms of audience reaction, you would be faced with a very mixed set. Now such a claim seems obvious—of course, no creative exhibition has ever been met with absolute support or complete repulsion. However, at the show’s opening this past Thursday, the packed galleries buzzed with such a cacophony of contrasting responses that one thing became immediately clear: This show is not concerned with pleasing its audience. In one corner, observing a melting block of ice, a man swooned, “Yes, the pace at which the object disintegrates directly impacts our conception of time.” Simultaneously, a woman across the room stood in front of a video projection, muttering to her wide-eyed friend, “Oh my god. What—what is that? What is he rubbing on her? Oh god, oh no.”  Around the corner, two people emerged from a massive, fluorescent yellow room, one looking as if he had just experienced an aneurysm, the other, a trip to Narnia.

Such disagreement does not suggest that the show represents a special brand of art that only some people can understand; rather, the individual pieces are so aggressive, strange, counterintuitive, and even vulgar that they seem to beg for such varied reactions. When watching a video of a man being voluntarily shot in the arm, we are justified in feeling a flicker of discomfort; when stumbling across a lamb carcass sculpture, we are understandably a bit nauseous. The strength of the show—which represents some 60 artists who in the turbulent atmosphere of the 1970s attempted to redefine conceptual art, to restructure the very role of the artist—comes from this polarized set of reactions. One feels both repulsed by and attracted to the grotesque pieces, both bored and intrigued by the timid ones. More than inviting or repelling viewers, the pieces in State of Mind ask them to become aware of their own techniques of perception, to question the harsh, even visceral reactions they experience. Its aim seems not to depict or inspire beauty, but to question it.

In posing such questions, the exhibition—separated into thematic areas that focus on the environment, feminism, and politics—explores the stance that the process of creation, rather than the objects it yields by it, constitutes the true “artistic spirit.” One might not glean this meaning immediately upon entering the show, but, after staring at a video of a man touching his gap tooth with his tongue and after walking barefoot through a fiberglass forest of illuminated “blades” (yes, you can actually do that), one can see that the show really is an expertly crafted compilation of adventurous artistic moves. You don’t have to understand anything. You certainly don’t have to find anything beautiful. But you do have to allow yourself to entertain the images and sounds in the exhibition as a cohesive, though confusing, unit.

I don’t know if I loved the exhibition or hated it. The atmosphere in the galleries is not a comfortable one, and I’ve had more than one nightmare about the images I experienced in conjunction with this show. However, for all its grit and aggression, State of Mind really is striking in that it is undeniably optimistic. The artists represented in the grouping imbue each piece, no matter how mundane or genuinely ugly, with a youthful sense of hope. The show is successful in that it is inquisitive, in that it forces the viewer to examine his or her interpretations as much as the pieces that prompt them; everyone is confused, and, in this tension, the show finds its power.

The Smart Museum will host State of Mind: New California Art Circa 1970 through January 12.