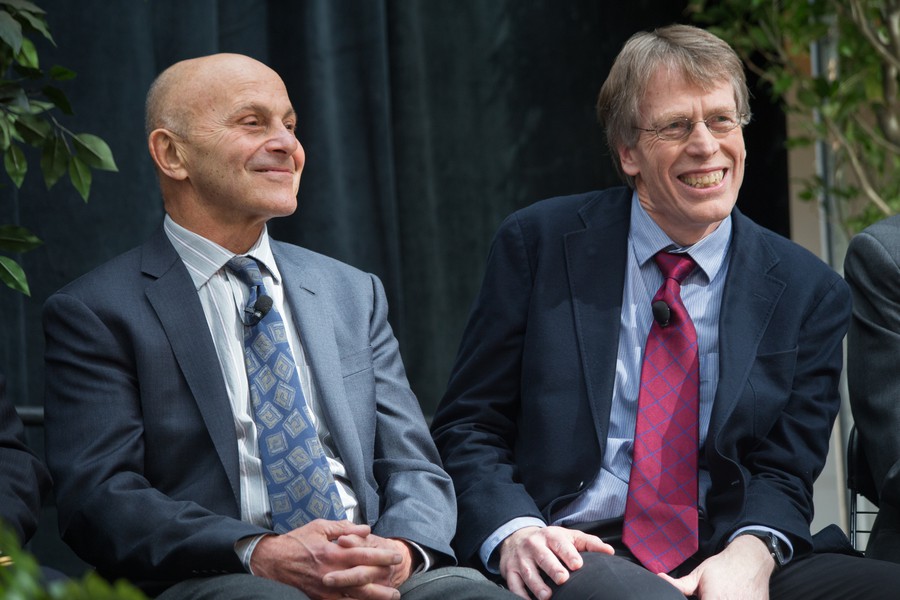 At 5 a.m. Monday morning, Professor Eugene Fama (M.B.A. ’63, Ph.D. ’64) was preparing for the day when he got a phone call from Sweden. A couple hours later, the newly minted Nobel laureate was where he would be on any other day, teaching his Theory of Financial Decisions class at the Booth School of Business.

Fama and Lars Peter Hansen, both University economics professors, won the 2013 Nobel Prize in Economics for their research on the predictability of asset prices Monday. They share the award with Robert Shiller of Yale University.

Fama and Hansen are the 27th and 28th University affiliates to win the Nobel Prize in Economics and bring the total number of University-affiliated Nobel laureates to 89. At a press conference Monday morning at the Booth School, University President Robert Zimmer noted that of the eight current faculty members who are Nobel laureates, six teach economics.

Fama thanked the University for providing the intellectual environment for his research.

“The interaction that you get from your colleagues is so influential in building your work that you cannot understand the impact,” he said. “I know I spent two years away from the University visiting another country, and when I came back, I had 16 written papers. And I showed them to [former Booth professor and 1990 Nobel laureate] Merton Miller, and he said, ‘junk, junk, junk, junk, junk.’… But had I been here, I would have avoided all the junk, junk, junk, junks.”

Fama, 74, discovered that asset prices are difficult to predict in the short term because markets quickly and efficiently incorporate all information about an asset.

“He wakes up and gets a Nobel Prize. Great day. What does he work on? Teaching. He taught his class today. The seriousness with which he takes every academic endeavor and how he really enriches the lives of his students and his colleagues is just phenomenal,” he said.

Hansen, who is also the research director of the Becker Friedman Institute at the University, developed and utilized statistical methods to test observations about asset prices.

Hansen said he was surprised by the news, which he found out while preparing to take his dog out for a walk early this morning.

“A couple years ago, my two mentors, [Christopher] Sims and [Thomas] Sargent, got the Nobel Prize at Princeton, and in their press conference, they both happened to mention me. So I figured, ‘Wow, that’s it. It’s good. I got my attention,’” he said.

Calling Hansen, 60, “the youngster of the group,” economics department Chair John List stressed the significance of his colleague’s research in helping fellow economists as well as other academics.

“Lars’ work is instrumental in testing the advanced propositions put forth by [Fama] and Bob Shiller,” he said. “The tools that Lars has developed are widely used by all social scientists.”

Like Fama, Hansen thanked his University colleagues and mentors, including fellow Nobel laureate Gary Becker (A.M. ’53, Ph.D. ’55), and discussed the way that they had influenced his work. Hansen also recognized the collaboration of his students, quipping that “most of my best students are more than happy to tell me where I’m wrong.”

When asked about the meaning of Hansen’s and Fama’s research, Becker noted the practical implications it has on the stock market.

“What their research, in a very simple way, shows is that stock markets work pretty well, so it’s very hard for you or me to pick stocks that will be better than the average of all stocks over time,” said Becker, who attended the press conference along with several other Nobel laureates. “I think that’s the most practical thing and something really significant that both of them have shown in different ways,” he told the Maroon.

Fama, Hansen, and Shiller all worked independently on their research, but taken as a whole, their findings paint a complex picture of the ways in which both market and behavioral forces drive asset prices.

Shiller, an economics professor at Yale and a specialist in behavioral economics, found that stock prices take on patterns over several years and that irrational, human choices can greatly alter market conditions.

In announcing the award Monday morning, the Nobel committee noted that Fama’s and Shiller’s findings are “surprising and contradictory,” but together, their efforts “have laid the foundation for the current understanding of asset prices.” They explain, for example, how housing prices became exorbitantly high in the late ’90s and early 2000s, leading to the housing bubble, which significantly contributed to the most recent financial crisis.

In addition to the Economics Nobel, UChicago scientists also contributed to the discovery of the Higgs boson, which won the 2013 Nobel Prize in Physics, announced last week.