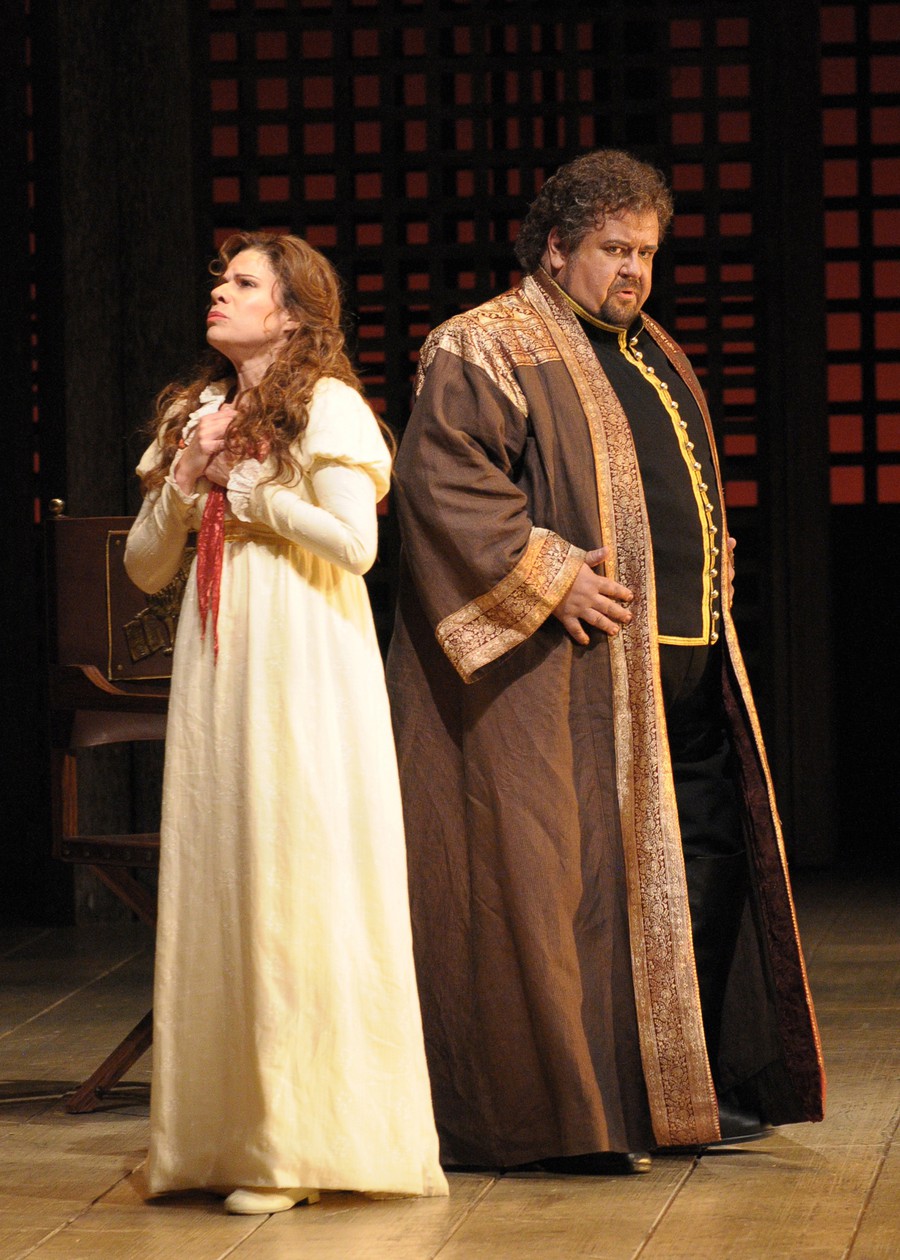 Courtesy of Lyric Opera of Chicago

The Lyric Opera has a gorgeous auditorium—but I also had a really, really good seat. Ninth row, orchestra seating. You could hear and see everything, and there was a lot to see. The Lyric does this wonderful thing with student-priced tickets through its NExT program: $20 for some of the best seats in the house. It’s a purchase you won’t regret if you use it to see the Lyric’s current production of Otello.

The Lyric’s production of the opera stars tenor Johan Botha as the title character, baritone Falk Struckmann as Iago, and soprano Ana María Martínez as Desdemona. The performance is supported by Verdi’s rich, gripping music—the closest thing the opera has to a narrator because Verdi hides his characters’ traits in his harmonies. For example, Iago’s music can be suave or joking or courteous, but there is always a sense of discomfort, a touch of bass strings betraying his hidden evil. Here, Struckmann plays a two-faced and subtle villain, able to match his sound perfectly with his character. He has a velvet voice for Otello, a sort of “public sound,” but a terrible and oppressive private sound for his rage soliloquies and arias. His Act II power aria, “Credo in un Dio crudel,” (“I believe in a cruel God”) had me in shivers.

Verdi’s Otello cuts away a good deal of the original Shakespeare to make room for all of the singing. Gone are the first act and the finer details; all that remains is the central drama among the characters Otello, Iago, and Otello’s wife, Desdemona. Otello is the Moorish governor of Cyprus, victorious in battle with the Turks. Iago is his treacherous ensign, passed over for promotion in favor of Cassio, another soldier. In revenge, he convinces Otello that Desdemona and Cassio are having an affair. Otello becomes consumed with jealousy and kills his wife. When her corpse is discovered, Iago’s plot is revealed, and Otello commits suicide.

Botha certainly has a gorgeous voice; it’s a lovely, glowing sound with some volume behind it. I can hear Otello the statesman, the genteel governor, but not Otello the warrior. His entrance in Act I is a soaring declaration of victory—beautiful, but no bite. However, Botha expresses Otello’s softer side perfectly. His duet with Desdemona, in which they recount how they fell in love, is sweet and sentimental. His voice becomes more strident as jealousy sets in, and grim as he tells Desdemona she must die. Otello the husband has a perfect moment in Act III. At first he is courteous to Desdemona, the orchestra playing a love theme—then, suddenly, he reels on her, and the music becomes almost hysterical.

Martínez plays a fine Desdemona, with a sweet voice to sing her melodies and the good sense to not overplay her anguish. Her Desdemona is sympathetic, a soft creature destroyed by forces beyond her control. I loved her Act IV “Ave Maria” prayer song the best. It’s beautiful and sincere. The orchestra maintains excellent control throughout the opera, but it truly shines in this scene. It’s all shimmering strings and serenity up to a certain point when suddenly the music shifts to the low bass strings, resulting in a dark, chilling effect.

The staging was solid, brought forward some few hundred years to the 19th century (me, I don’t mind a few top hats and morning coats here and there). I loved the set, especially the use of real fire during the bonfire scene because it makes the celebration that much more believable. The swordfight in Act I was also done really, really well—and I have seen my fair share of terrible swordfight scenes. And the white curtains covering the set in Act IV made for a tremendous effect for Otello’s entry, with his giant, menacing shadow, knife in hand, projected against the backdrop.

What would a tragedy be without the final scene when everyone (important) dies? The witnesses are brought onstage and all is revealed. Botha’s Otello, desperate with grief, stabs himself with a hidden dagger. Before he dies, the familiar love-melody is heard one last time—tender, nostalgic, even hopeful. He kisses Desdemona for the last time and promises to meet her in heaven. For all its rage and jealousy, the opera closes softly in the strings, one shimmering chord. Curtain.