New hub to dish out $20 million for startups 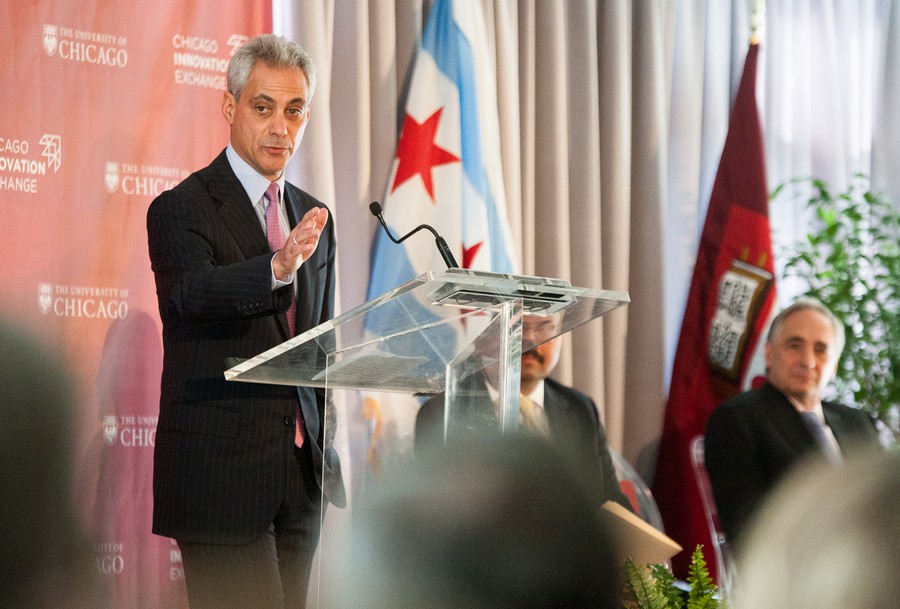 The new Chicago Innovation Exchange (CIE), located on East 53rd Street and South Harper Avenue, will provide workspace, collaborative opportunities, and financial support for entrepreneurs across the University and the city.

“[The CIE] will create a hub for University faculty, students, alumni, and researchers as well as external businesses who want to be located near all this talent and energy. The exchange will give them access to programming and expertise, venture capital and, perhaps most importantly, access to each other,” University President Robert Zimmer said at the announcement.

Drawing from a privately sourced, philanthropic investment of $20 million, the CIE will incubate five to 10 businesses annually, making an average investment of $50,000 to $100,000 per business, according to CIE Executive Director John Flavin.

The Center differs from existing venture creation initiatives such as the Booth School of Business’s Polsky Center—which is one of CIE’s partners—in that the Exchange provides opportunities at an earlier stage.

“The CIE will be a source for new ventures that require resources that aren’t readily available from the University…[and] gives us the chance to cast a wider net,” Flavin said in an interview. “The most likely ventures [at the Center] will be near stage zero and just getting started.”

This “wider net” means investing in ideas across multiple different industries. Flavin, a former science and technology venture capitalist, pointed out that the word “exchange” is befitting to the CIE, as the Center aims to serve as the nucleus of a network of interconnected University institutes and affiliates, ranging from medicine to education.

The Center’s combined 21,000 square-feet spread between two buildings will also house the offices of the Institute of Molecular Engineering’s water research initiative and the offices of Argonne National Laboratory’s energy storage hub, bringing Argonne to Chicago for the first time.

Through its multidisciplinary approach, the Center will continue the University’s tradition of groundbreaking scientific research and combine it with its more recent success in launching businesses, Zimmer said.  Since its inception in 2003, the Polsky Center and its “venture challenges” have led to the creation of more than 90 startups, including GrubHub, Braintree, and Kip Solutions.

Despite the fame and success of some UChicago startups, the University still lags behind nearby institutions in revenue from intellectual property. The University grossed $82.6 million from 2002 to 2011, compared to University of Illinois Urbana-Champaign’s $99.2 million and Northwestern University’s $1.48 billion, according to Crain’s Chicago Business. However, Flavin, who formerly directed a similar initiative, Chicago Innovation Mentors, emphasizes that the Center “looks beyond competition.”

“What we’re trying to create here is a Chicago innovation ecosystem, of which the Chicago Innovation Exchange and the University of Chicago is just a part,” he said.

Nonetheless, Flavin said the CIE is unique in its approach and scope and will be “a major driver of how one university is helping take the game to the next level.”

Zimmer echoed this sentiment. “The University of Chicago’s unique strengths in research mean that the CIE will make an impact quickly,” he said. “All of this we believe is part of the mission of a great urban research university, to bring our intellectual strengths to bear on challenges of great importance in partnerships with our city.”

This year, the CIE will pilot a Student Associates Program for graduate and College students. Associates working in teams of 15 will be responsible for evaluation and assessment of business ideas as well as the operations and logistics of the Center’s programing, according to Flavin.

The CIE will be located primarily on the second floor in the historic building currently home to Harper Theater and future home to chef Matthias Merges’ upscale European restaurant A10. Renovations are expected to complete by next fall, according to University Commercial Development Manager John Dennis.

Beyond the 15,000 square feet in the Harper building, the CIE’s conference space will also occupy 6,000 square feet on East 53rd Street across the street. At a community meeting less than two months ago, Dennis only said that the University had plans for general renovations but did not mention any specific uses at that time, reported the Hyde Park Herald