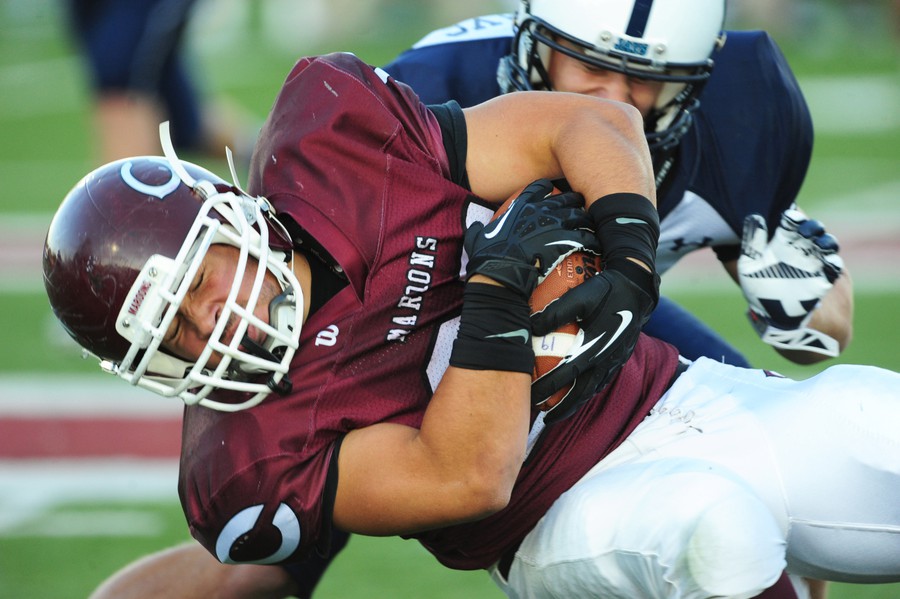 Following a bye week that was used to recover after their only loss of the season, the Maroons will start the second half of their campaign at home, facing Macalester in front of the homecoming weekend crowd.

Chicago (4–1) suffered its first defeat of the season on October 5 in Memphis, TN at the hands of Rhodes College (5–1). Along with the difficulties associated with playing a strong opponent, the South Siders experienced a wide range of non-football-related roadblocks that weekend, including a nine-hour overnight bus ride.

“The most challenging part was seeing the whole team fight for all 60 minutes and still come up short. It definitely wasn’t a lack of effort, [we] simply just got out-executed in a few instances and Rhodes was able to capitalize. But overall, everyone came ready to play, and you hate having to see your guys come up short when you know they left it all out there,” said fourth-year linebacker and captain Brian Duffy.

Fourth-year offensive lineman Franco DeMayo saw the bye week that followed the game in Memphis as a useful opportunity for the team.

“I think that, as a team, we would agree that the bye week was definitely a good thing, since we had a lot of guys get banged up last week and they were able to heal,” DeMayo said. “As a team, we really try not to add emphasis on previous weeks and just treat every week as if we were 0–0. Also, last week had no effect on our goal of winning [the] conference.”

Putting the season in perspective, Chicago has earned the right to be proud of its body of work up to this point. The team leads the conference with a 4–1 overall record and has performed well despite spending the majority of its season on the road, which is a theme that will recur in the second half’s round of games. Playing a home game, with the added energy that will come from the homecoming festivities and high attendance, should provide the team with an extra spark.

“The environment should be great,” Duffy said. “Everyone is real excited about the moves that the University has been making in recent years to get more support out at the games. It’ll be a lot of fun and will bring a lot of energy to the table.”

A saying echoed by most team members is one coined by new head coach Chris Wilkerson: “Control the controllables.” The team seems to have internalized this strategy, and it has influenced its mental and physical preparations.

“As long as guys can continue to stay focused on the task at hand, then we have the opportunity to do something special,” Duffy said.

DeMayo believes this Maroon squad has a chance to go further than those of past years.

“The main thing I would like to see the team keep doing is keep winning and sweep UAA play and bring the Founders Cup back to Chicago. The attitude and effort that every member of this team has and gives is exemplary, and with that combination no changes are needed,” DeMayo said. The Founders Cup is given to the team that wins the Chicago-Wash U game each year.

The Maroons kick off against the Macalester Scots at Stagg Field tomorrow at 1:30 p.m.