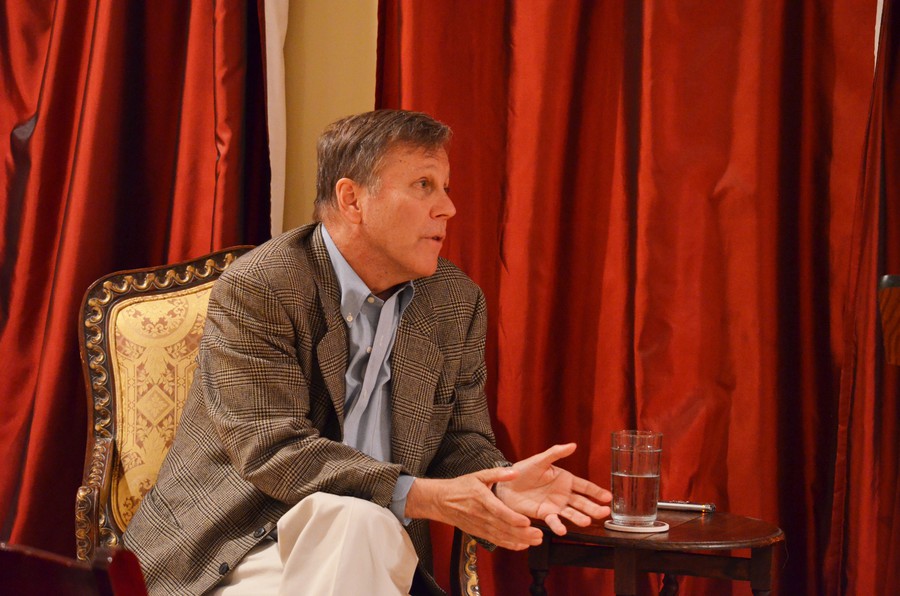 Dana Gioia was invited to campus Thursday evening to read from his collection Pity the Beautiful, which he waited 11 years to publish.

Dana Gioia has visited the city of Chicago more than 70 times, but had not set gaze on the University until Wednesday night. “It is an astonishingly handsome and impressive campus,” he noted, after a substantial pause. Even compliments such as this one carry a sense of serious intentionality when spoken by Gioia, who for the past two decades has gained international notoriety for his advocacy of arts in today’s culture.

Gioia was invited by the Lumen Christi Institute and the Program in Poetry and Poetics to read from his latest book of poetry, Pity the Beautiful, which he waited 11 years to publish. When asked why he waited so long between publications, Gioia borrowed a defense from Wallace Stevens: “Writing a book of poetry is a serious thing.”

This seriousness translates into the content and tone of many of the work’s poems as well, the power of many being in their bare expressions of trauma and spiritual suffering. “There is a great deal more emotional directness in this book,” which Gioia believes distinguishes it from his previous work. Many of the poems portray a haunted narrator—haunted in separate poems by a woman, or a son, or God, or his own memories.

Never is Gioia more direct and vulnerable than in the work’s final poem, “Majority,” where he speaks openly about his son who died at a young age. “When you lose a child…a very odd thing happens. You see a kid the same age and you say, ‘My son would look like that now,’’’ Gioia explained before his reading. The poem itself is a spiritual reconciliation for the work’s haunted narrator, at last able to accept his loss: “Now you are twenty-one./ Finally, it makes sense/ that you have moved away/ into your own afterlife.”

Along with his honest, unaffected expression of deeply personal content, one of Gioia’s greatest skills as a poet and speaker is his ability to translate abstract principles and concepts to relatable and often entertaining images. This skill has allowed him to write books of poetry that sell while expanding on challenging concepts like his own Catholic faith and theology. “One of the great things about Catholicism is that it has numbered lists, and probably my favorite list is the seven deadly sins,” he casually notes. “I see all seven, all huddled together in a second-rate diner around a prospective sinner.”

In addition to writing poetry, Gioia has spent much of the last two decades advocating for the arts and poetry on the national and international stage, raising awareness to their diminished recognition in modern society. Despite the obstacles the poetic medium faces to be restored to its once central place in American culture, Gioia sees the opportunity for a new receptiveness to the medium in the new generation. “Your generation is the first in more than a century for whom poetry has had a formative influence. I’m talking about hip-hop. You have heard, from early adolescence, literary language shaped for expressive effect.” In the rise of rap and spoken word performance, Gioia sees an opportunity for poetry to be embraced in forms and on levels that previous generations could not offer.

“My life has been a series of lucky or unlucky accidents,” said Gioia, who received an M.B.A. from Stanford University and had a successful business career for 15 years. One of the major turning points in his life came in 1991, when he wrote a piece for The Atlantic entitled “Can Poetry Matter?” The piece gained international attention, and Gioia left the business world to write full-time; he would later serve as the chair of the National Endowment for the Arts (NEA) and now serves a post as a professor of poetry at the University of Southern California. “The story of my life has been a story of improvisation; the one constant is that I am a poet, and I improvised many different ways that I could keep my life together while writing poetry.”

On his advice to young artists, Gioia again spoke with serious intentionality, pausing every few beats, choosing each word carefully. “The thing about life is, if you pretend to be something you are not, you spend an incredible amount of time doing that...You exhaust yourself,” he said, his advice bringing to mind his distressed, haunted narrator. “If you’re doing what you love, it’s as easy as breathing.”