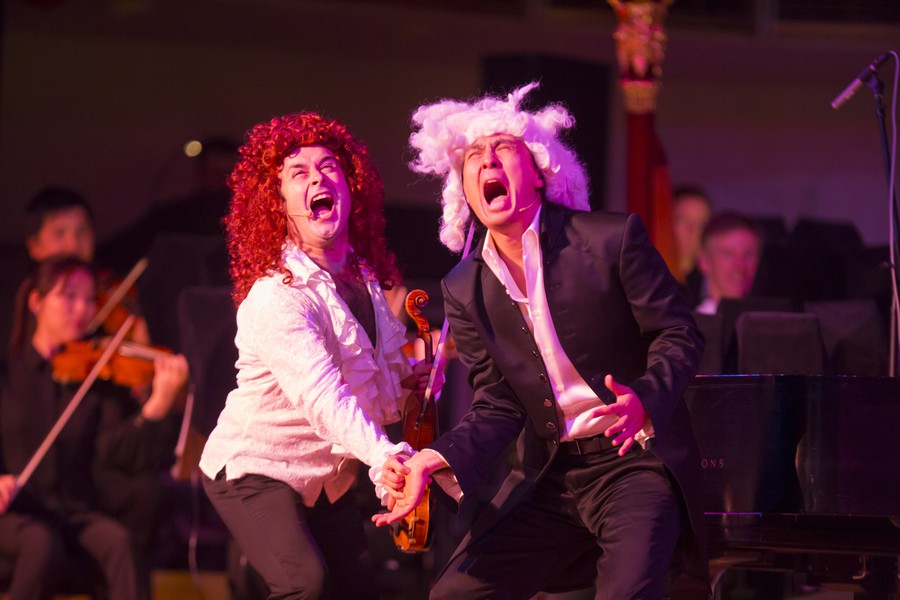 Aleksey Igudesman and Hyung-ki Joo aren’t your ordinary classical musicians. For one thing, they take requests: Mozart or James Bond? Turns out Mozart is the audience favorite, but it’s never just Mozart. There’s always a twist, something that sneaks up on you—like 007 music creeping in under Mozart’s 40th symphony. Or the Rachmaninoff piano concerto that turns out to be Eric Carmen’s “All by Myself.” Or Joo’s tips on success in the classical music industry…delivered alongside Strauss’s “Blue Danube” waltz. (Tip two: only play music that everyone loves.)

This was Friday’s BIG Nightmare Music at the Chicago Symphony Orchestra (CSO): a spirited mix of pop culture, classical music, and dad-worthy jokes. Violinist Igudesman and pianist Joo, the duo behind the viral video “Rachmaninov had big hands,” are clearly brilliant musicians and performers. They make comedy with a series of musical arrangements that couple simplicity with genius delivery. Their sketch "From Mozart with Love" begins with an onstage spat over repertoire. Mozart beats out Bond for the slot (the violinist calls the shots) but Joo goes ahead and plays 007’s theme music anyway. What the audience hears is a subtle change in the accompaniment—the symphony’s opening tune above, the iconic doo-doo-doo-doo underneath. It’s so subtle and so obvious that you can’t believe your ears at first. But it’s happening, and pretty soon the orchestra is swinging both tunes at full forte, one after the other, then both at once. It’s so witty and brilliant, you can’t help but laugh.

BIG Nightmare Music abounds with such clever moments. In “New Work,” Igudesman and Joo rehearse a country ballad (Joo, it turns out, has quite the baritone). At one point, Igudesman is asked to moo like a cow—and does so on the violin. “A Very Blue Danube” pokes fun at the classical music industry. Want to be a successful musician? “Show off,” Joo says, breaking into a florid piano cadenza—complete with swoons worthy of Lang Lang (yes, this was part of the joke). There’s “Alla Molto Turca,” in which Joo finds a problem with Mozart’s famous “Turkish March.” “It doesn’t sound Oriental enough,” he says, and substitutes B-flat for B, with mind-blowing results. Then the CSO joins in full-out janissary mode, Igudesman bops seductively, and you’re left wondering how Mozart’s piece sounded remotely Turkish in the first place.

BIG Nightmare Music builds on the pair’s original show, A Little Nightmare Music, a pun on Mozart’s Eine kleine Nachtmusik. The new show brings in an orchestra, which expands the scope of its arrangements. More elaborate effects are possible—“A Very Blue Danube,” for example, plays several recognizable waltz melodies in counterpoint, and the fun lies in identifying each one. The bigger soundscape also makes for more complex timbres, like the sketches “Fistful of Dollars” and “Tambourin chinois,” which parody Westerns and kung fu movies. In contrast, Igudesman and Joo’s solo sketches seem simpler and more intimate, and help pace the show. The orchestra is BIG Nightmare Music’s greatest weakness, as its role is to act as pure accompaniment. I would have liked to see a sketch built around the orchestra; Igudesman and Joo missed a great opportunity there.

BIG Nightmare Music also suffers from a lack of unity. Each sketch on the program is pretty standalone, so the whole thing feels more like cocktail sausages than steak. Two sketches, “Tango Loco” and “Uruguay,” make this chaos more obvious. They are random, sort of tacked on: definitely the weaker sketches. But for all its rowdiness, BIG Nightmare Music is extremely engaging. There’s so much happening that you are bound to like something—and there’s a lot to like about Igudesman and Joo.

Part concert and part circus show, BIG Nightmare Music is brilliant, funny, and even insightful. As part of the duo’s articulated “dream…to make classical music accessible to a wider and younger audience,” it’s exceptionally good at making people laugh at music generally seen as serious and stuffy. It’s a refreshing and candid way to package classical music away from its rusty reputation. Appropriately enough, the final number on the program is Gloria Gaynor’s “I Will Survive.”