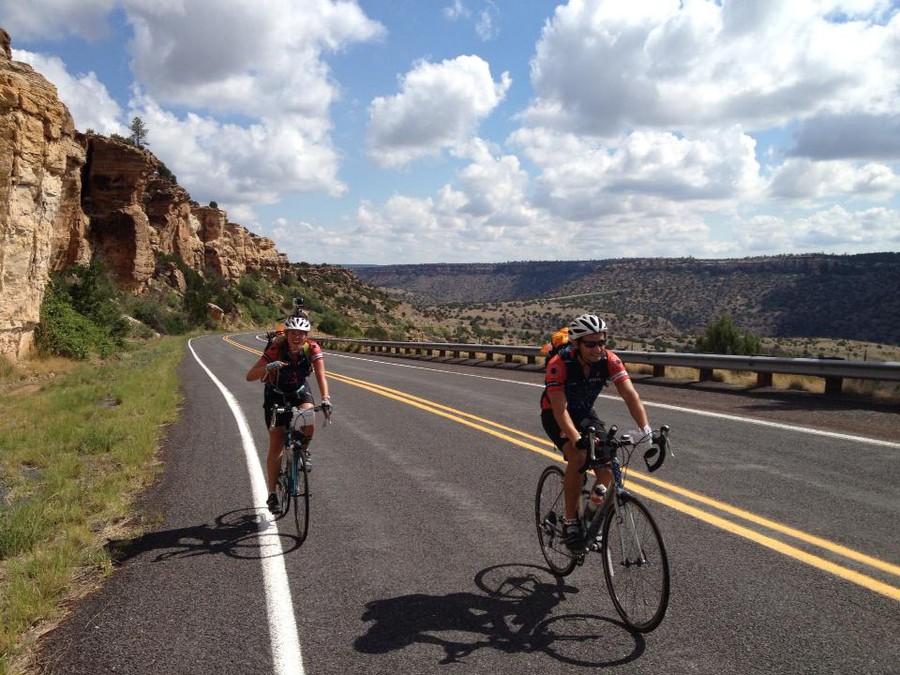 For Max Rubinstein (A.B. ’10), what started out as a fun way of de-stressing after work quickly spun into a cross-country bicycle journey spanning 10 weeks and more than 4,000 miles.

This past summer, Rubinstein biked across America as a participant in Bike & Build, a nonprofit organization centered on raising money and awareness for affordable housing. As part of the southern U.S. regional team, Rubinstein and 30 other riders pedaled 4,058 miles from Jacksonville, FL, to Monterey, CA, traveling through and volunteering in cities like New Orleans, Dallas, and Santa Fe along the way.

“I thought it was a really cool way to do something that was both fun personally but also meaningful more broadly, in terms of the affordable housing cause,” Rubinstein said.

During the course of the 10 weeks, riders fundraised and participated in volunteer building projects with national and local housing organizations, including Habitat for Humanity and Rebuilding Together, to construct affordable homes for families in need, according to an October Bike & Build press release.

Biking, Rubinstein said, was an especially effective way of raising awareness for affordable housing. The riders traveled mostly on county highways and back roads. There, they were more visible to civilians and pedestrians, many of whom would donate money to the organization.

“You’re a group of bikers, so a lot of people stop and ask you about what you’re doing and about the cause, and you just talk to them. People donate stuff along the way,” Rubinstein said.

To minimize expenses, program participants slept in churches and community centers. The program, founded in 2002, has accumulated a large enough alumni network that many past participants also hosted and fed the riders, according to Rubinstein.

“There were times when something fell through at the last minute, and we had to change our plans, but it all worked out, which was lucky,” he said.

The group averaged 71 miles per day, which was physically trying for a nonprofessional cyclist like Rubinstein. However, the pain was worth it, he said.

“Initially, we would stop every 10 miles and stretch, because you’re just not used to it and your muscles have to adjust,” Rubinstein said. “But once you’ve been doing it every day, your body gets used to it.”

There was also a pre-program fundraising component. Before the trip, which took place from May to early August, each participant was required to fundraise $4,500 to be granted to the program’s affordable housing partners—most of them youth-oriented organizations—at the end of the trip. Each individual rider, Rubinstein said, was also allowed to give $500 in additional fundraised money to an affordable housing organization of his or her choice.

Rubinstein chose to donate his $500 to the Washington, D.C., chapter of Habitat for Humanity, where he volunteered a few times over the course of the year before his trip, mainly as a way to reduce stress after work.

“I always had a really good time. I would just take off work and go volunteer at Habitat. It was a nice way to de-stress,” Rubinstein said.

For Rubinstein, who studied history at UChicago, Bike & Build served as a distinctive way of supporting a cause he cared about in the three-month interim between ending a full-time job at the U.S. Department of Justice and starting graduate school in public policy at Georgetown University.

“I think it’s not often that you have three months you can spend biking across the country,” he said.

Because of its mission and timing, Rubinstein said that the Bike & Build experience is not one that can be easily replicated.

“You guys at UChicago should do this if you can, because it’s really awesome and a really fun experience,” Rubinstein said. “By the end, you’re definitely tired of biking, but it’s a lot of fun. You really can’t beat it.”